Legislators Ramp Up Their War on Voting Rights

Republicans in Georgia have passed a sweeping set of discriminatory voting restrictions. The working class must fight for the right to vote — the most basic right of capitalist democracy — making sure everyone has access to the ballot. 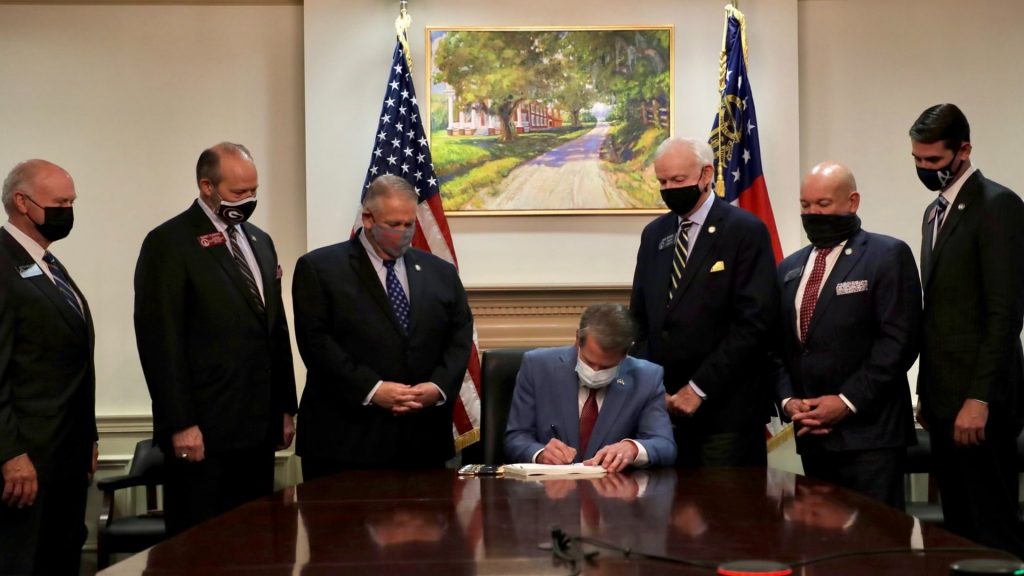 Republicans in Georgia have signed into law a sweeping set of voting restrictions aimed at curtailing ballot access for Black and Brown voters. It is the first state to do so amidst an increasingly contentious battle over voting rights, where the GOP increasingly sees voter suppression as its only route to survival. While true democracy — one where all aspects of society are democratically decided — is not possible under capitalism, we must unconditionally support the right to vote and fight these attacks on our fundamental democratic rights.

Georgia governor Brian Kemp — himself a beneficiary of voter suppression and voter-roll purges in the 2018 gubernatorial race — signed the bill into law on Thursday evening in an event not wanting for symbolism. Images show Kemp flanked by six white lawmakers and seated in front of a painting of a slave plantation. Democratic state representative Park Cannon, a Black woman, was arrested for trying to enter Kemp’s office to watch the governor sign the bill. Video shows Cannon knocking on Kemp’s office door, stepping away to use hand sanitizer, and getting handcuffed when she started knocking on the door a second time. Cannon was taken away by state troopers and released from jail that evening.

The law is “a Christmas tree of goodies for voter suppression,” according to a Demacratic state senator. It imposes strict identification requirements for absentee voting, where voters must now provide a witness signature and a photocopy of their voter registration card. The law also allows for unlimited challenges to an individual’s voter registration and severely restricts the eligibility for mail-in voting. For context, 1.3 million Georgians — 450,000 of whom were Republicans — voted by mail in the 2020 presidential election. Under the new legislation, “drop boxes” for absentee votes will be limited, forcing Georgians to travel further to vote, and the early-voting period for runoff elections will be shortened. The law also makes it a crime to offer food or water to people waiting in line to vote.

These odious measures are a response to the baseless claims of voter fraud in the 2020 election. While many Republicans have stopped short of endorsing former President Trump’s conspiracy theories around election theft — Kemp resisted Trump’s request to call Georgia in his favor — they have nonetheless ramped up efforts to restrict ballot access in an effort to shore up future electoral victories.

In fact, increasingly desperate Republican politicians have admitted that voting rights are an existential issue for the GOP. Senator Ted Cruz warned that Democrats “will win and maintain control of the House of Representatives and the Senate and of the state legislatures for the next century” if voting laws aren’t restricted. The chairwoman of the election board of Gwinett County, a suburb of Atlanta, said, “they’ve got to change the major parts [of election laws] so that we at least have a shot at winning.”

The true aim of these measures are clear: harming Black and Brown voters. Black Georgians disproportionately vote early, as they are more likely to have jobs that do not allow them to go to the polls during business hours. Forbidding activists from providing support and snacks during hours-long waits will affect majority-Black precincts, which face long voting times as Republicans have reduced the number of polling places over the years. Black and Brown voters are also less likely to have access to acceptable forms of ID, nevermind access to printers and photocopiers to send these documents to election officials. And the unlimited challenges to individuals’ voter registration opens up a “Pandora’s box of race-based, ethnicity-based challenges.”

In response to the legislation, protesters rallied outside of the state capitol in Atlanta, as well as outside the headquarters of major businesses like Delta Air Lines, which activists are calling to boycott for not opposing the bill, despite their alleged commitment to the Black Lives Matter movement. State Representative Cannon rightfully called the new Georgia law “Jim Crow in a suit and tie,” a sentiment echoed by President Joe Biden. Just hours after Kemp signed the bill, civil rights groups sued the state in federal courts, claiming that the measures have “burdensome and discriminatory effects on voting.” Activists from the NAACP and groups like Black Voters Matter are now gearing up to fight the discriminatory measures.

But Georgia is not alone: GOP lawmakers across the United States are ramping up their war on voting rights. Republicans in the four other states that Biden flipped in the 2020 presidential election — Arizona, Pennsylvania, Michigan, and Wisconsin — have wasted no time in trying to implement voting restrictions to avoid a repeat of last year’s losses. Even states that Trump won, like Iowa and Florida, are introducing measures to suppress votes, targeting mail-in voting in particular. In all, lawmakers in 43 states have introduced more than 250 bills with provisions to restrict voting rights.

In response to these restrictive measures, at the start of the month, the U.S. House of Representatives passed HR1 — also known as the For the People Act — a sweeping bill to expand voting rights and reform campaign finance. Among its provisions are making Election Day a national holiday, modernizing voting systems, universal access to mail-in voting, at least 15 days of early voting in all states, restoring voting rights for the formerly incarcerated, and same-day registration for federal races. The bill’s fate now rests in the Senate, where a hearing in the Rules Committee last week signalled that Republicans will fight tooth and nail against the legislation. This means that Democrats will not reach the 60-vote threshold to pass the bill without eliminating the filibuster.

But our hope of preserving the right to vote cannot rest with the Democrats. While President Biden may call Georgia’s law “un-American,” the reality is that voter repression is ingrained in the U.S. election system, and the GOP in particular has been hard at work suppressing votes for decades. Activists were sounding the alarm over discriminatory voter-roll purges during the 2008 elections. In 2014, President Obama said in a speech that, “the right to vote is threatened today in a way that it has not been since the Voting Rights Act became law nearly five decades ago,” and his presidency saw some of the worst gerrymandering and voter suppression measures in decades. The voter-roll purges in Georgia that helped Governor Kemp muscle his way to victory in 2018 began in 2012, and they were aided by the Supreme Court invalidating parts of the 1965 Voting Rights Act in 2013. The fight for the voting rights — the most basic right of capitalist democracy — must rest with the working class, using our collective power to make sure everyone has access to the ballot, including the oppressed, the incarcerated, and the undocumented.

This fight cannot stop at the ballot box, where we vote once every four years for which blue or red capitalist politicians will oppress us. So, as we unite in the struggle against racist voter suppression, socialists must push further for a real democracy — one where every aspect of society is decided democratically.