With a strike authorization already on the table, Tuesday’s actions could be the first step toward a bigger nationwide strike of airport workers. 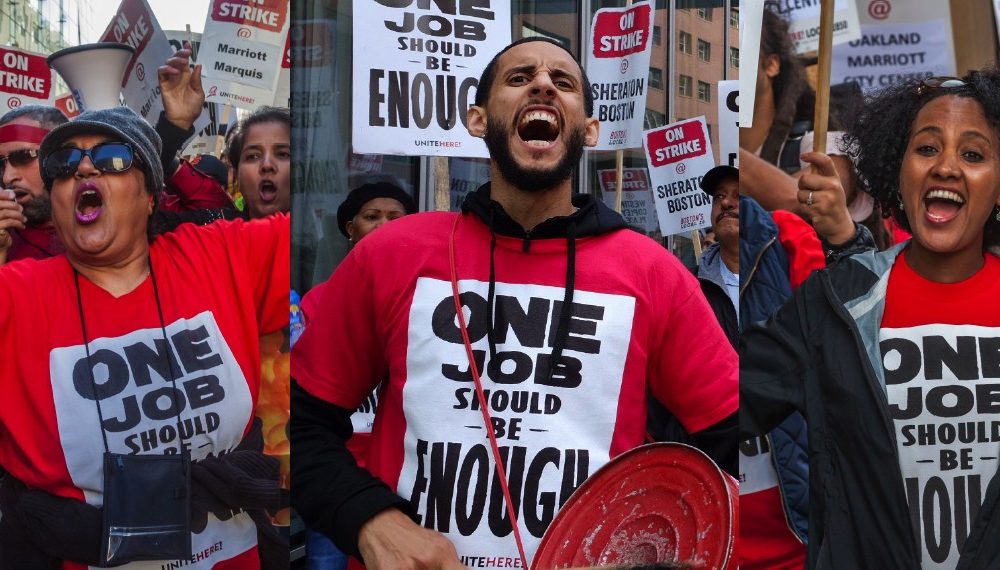 In a scene reminiscent of the massive airport protests against Trump’s Immigration policies in 2017, airport workers shut down access to several of the biggest airports in the country on Tuesday, demanding higher wages and more affordable health care. At 17 airports, from New York to Los Angeles, Dallas, San Francisco, Philadelphia, and D.C., food service employees represented by the International Brotherhood of Teamsters, the Retail Wholesale and Department Store Union (RWDSU), and Unite Here held die-ins, blocked terminals, and halted traffic on one of the busiest travel days of the year. Overall, several thousand members participated in the nationwide protests and more than 100 people were arrested.

Although Tuesday’s demonstrations were staged events tightly controlled and orchestrated by the union bureaucracy, they nonetheless offered a glimpse of the real power of the working class to disrupt business as usual, particularly in the transport sector, where such disruptions can shut down entire cities.

These protests are yet another example of the rising level of class struggle in the U.S. since the 2018 Teachers strikes. In June, 11,000 workers from 33 airports in 28 cities voted by a great majority to authorize a strike, and Tuesday’s demonstrations are a clear escalation of tactics that could lead to a nationwide strike of airport food service workers in the near future. Unfortunately, there are two things standing in the way of such action: The Railway Labor Act (RLA) and the union bureaucracy.

Like other anti-union laws across the country, the RLA represents a compromise between labor and the State, a compromise that is almost never in the interests of workers. While the law provides some protections for unions, such as the continuation of expired contracts, it also prohibits unauthorized strikes until the union can prove that arbitration has failed. This compromise not only weakens the ability of unions to use the strike weapon when they see fit, it also ties them to the state in a way that inhibits more radical independent action.

In other words, with the RLA in place, the union leaderships must request the approval of the National Mediation Board to stop work. After receiving permission to go on strike, workers would have to wait another 30 days in a “cool down” period. During that time American Airlines would no doubt prepare to keep disruptions to a minimum.

But a law is only worth the paper it is written on and can be broken by the strength of workers. American Airlines itself is 85% unionized between the pilots, mechanics, flight attendants, baggage handlers, and various other classifications, and other airlines are likewise well unionized. Additionally, at Delta, 25,000 flight attendants are fighting to join the Association of Flight Attendants led by firebrand left bureaucrat Sara Nelson. There are plenty of natural allies of the airline food service workers, and those numbers are growing.

So why then were Unite Here members not joined in solidarity from the unions that represent the other trades in American Airlines? Where were the signs from the mechanics and baggage handlers, the pilots and the flight attendants? At the JFK protest, the union bureaucrats had Mayor Bill de Blasio and other Democratic Party movers and shakers speak on stage—surely they could have organized a few workers from other sectors. That solidarity is key.

During the protests, Unite Here claimed that every minute a terminal was delayed the company lost thousands of dollars. What would happen if all flights were cancelled throughout an airport? Not just one airport, but 33? Instead of meticulously-planned spectacles directed from the stage with plenty of staff and politicians on hand, a strike that wins a living wage and quality healthcare will require rank and file committees throughout all classifications at airports across the nation. These actions would most likely have to be created by workers themselves, as the union leaderships have demonstrated that they are more concerned with politicians and the law than organizing actions that can win substantive gains for workers.

Like other countries across the world, the United States is experiencing a significant upsurge in class struggle, particularly strike activity. Indeed, since the massive teachers strike wave in 2018—which has extended into 2019 and shows no signs of slowing down—U.S. workers, both public and private, have rediscovered the weapon of the strike.

As the recent strikes at GM and Stop and Shop show, working people can fight and win better wages and working conditions when they organize and fight. However, building workers’ power is about more than just winning wages and benefits. Developing and building radical rank and file unions within the transportation and logistics sector would lay the foundations necessary for strikes that could shut down the entire economy. Such a weapon—in the hands of working people—could win significant gains for the working class and even topple governments. If several hundred air traffic controllers have the power to force the government to reopen, as they did in 2018, imagine what could be achieved if the entire airline industry went on strike alongside warehouse and distribution center workers.

Building such a fighting labor movement, however, will require a radical and self-organized rank and file movement capable of taking on the union bureaucracy as well as the state. While we applaud the widespread demonstrations on Tuesday as a courageous step forward for airline caterers, and as further evidence of growing militancy in our class, socialists must point out the obstacles in our way. The labor bureaucracy depends upon and works hand in hand with the state to maintain labor peace. Only the rank and file have the power to build a strike that can break the RLA and win the demand that “One Job Should Be Enough.”