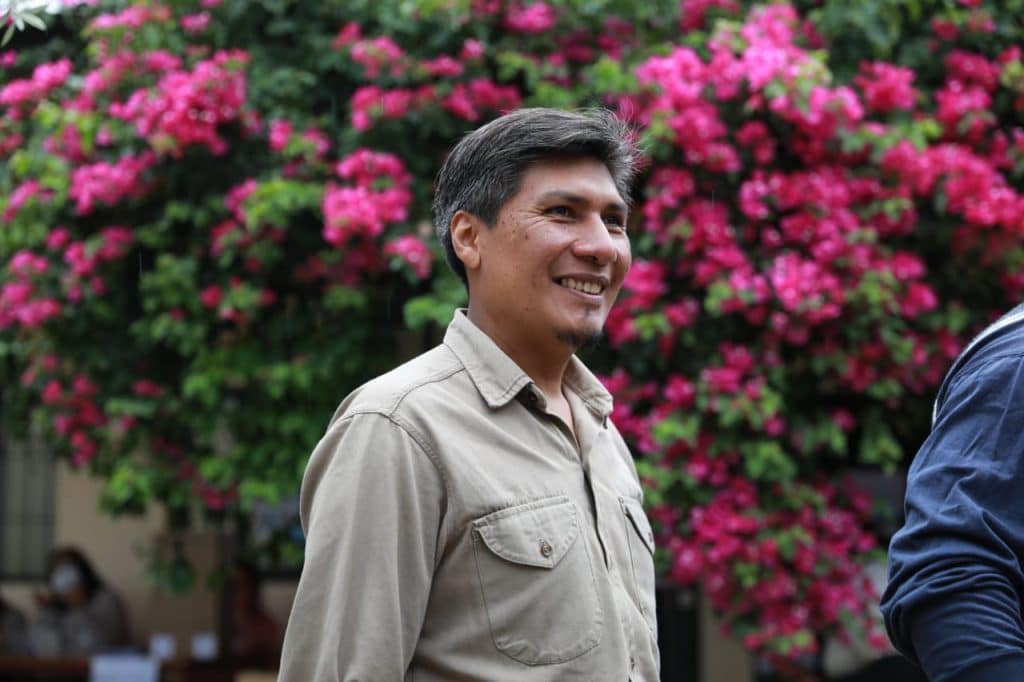 When Alejandro Vilca was a boy growing up in Jujuy province in Argentina’s far northwest, he had to walk around the neighborhood selling buns and pastries. He often went barefoot, as his parents did not have enough shoes for their five sons. His mother worked  three jobs at once, including one as a domestic worker.

This was a normal life in Jujuy, where up to 80 percent of the population has Indigenous roots and incomes are 40 percent lower than the Argentinian average. The Kolla people have lived in the region for centuries, yet the provincial government has been  dominated by a few oligarchic families of European descent.

On Sunday, Vilca, now 45, made history. He earned more than a quarter of the vote in  the province — enough to secure  one of Jujuy’s three Congressional seats. He will be the first Indigenous worker in Argentina’s history to enter the Chamber of Deputies. His victory  was part of a historic election for the Workers Left Front — Unity (FIT-U), one in which 1.3 million people across the country voted for the working-class, socialist coalition. The Worker’s Left Front also won three Congressional seats in the province and city of Buenos Aires.

Vilca’s victory took place within one of the country’s poorest and most oppressed regions. Around half the population in Jujuy lives in poverty and one in four are unemployed. Children often have to walk several kilometers to reach their schools, which are typically crumbling and lack amenities like heating in the winter. Some students even go without desks or chairs. With rapidly rising inflation in the country, the salaries of Jujuy’s teachers and state workers have effectively fallen by 10 percent.

The province’s poverty contrasts starkly with the massive profits earned by big business. The international demand for lithium has meant a windfall for the multinational mining corporations operating the Jujuy. There are now over 160 mining projects in the province, primarily extracting lithium destined for export. The mining industry has not only seized indigenous lands but has contaminated local water sources with arsenic, leaving schools and homes without potable water.

After finishing secondary  school in Jujuy, Vilca went to the University of San Juan 700 miles to the south. It was there, while fighting against neoliberal reforms to the higher education system in the 1990s, that he became a Trotskyist. For lack of money, he had to return to Jujuy without completing a degree. He became one of the founders of the Jujuy branch of the Party of Socialist Workers (PTS).

Back in his native Jujuy, Vilca got by as a factory worker, an insurance salesman, an ice cream vendor, and with many other precarious jobs. In 2001, he got a position with the city government. He was part of a struggle to win permanent contracts for all city workers. As punishment for his activism, he was sent to work on a garbage truck.

But if this was supposed to break his spirit, it didn’t work. Alongside other sanitation workers, Vilca only stepped up his activism for workers rights. He also joined struggles against environmental destruction and in defense of Indigenous communities. Both these struggles are intertwined in Jujuy, where Kolla communities have long fought back against incredibly destructive lithium mines on their lands.

Vilca first earned a seat in the provincial legislature in 2017 when the Workers Left Front earned 17 percent of the vote in Jujuy. Despite his political successes, Vilca remains part of Jujuy’s working class. When the legislature is not in session, he continues to work on the sanitation truck, often beginning at sunrise and continuing until 6:00 or 7:00 at night. “We are not professional politicians,” Vilca said on this election night, “we are workers who do politics.” In the legislature, he never accepted a salary higher than that of the average worker; he donated the rest to workers’ struggles. It is a pledge taken by all members of the Workers Left Front and one which he will continue to uphold in Congress.

The victory was possible only because of the hundreds of militants and volunteers who lent their support to the campaign. In some of the poorest neighborhoods, supporters offered their homes for campaign meetings. Workers put up posters and canvassed among their neighbors and co-workers. Over 1,400 people signed up as poll watchers to defend the votes for the Left. Only in this way did the Workers’ Left Front overcome the numerous attempts at election fraud by bourgeois politicians. Their militant campaign has made history; over 100,000 people turned out across Jujuy to vote for Vilca and the slate of the Workers’ Left Front.

Vilca’s win in Jujuy shows that the ideas of revolutionary socialism can resonate among the most exploited and oppressed. As he has explained, “Some people claim that we Trotskyists are all students. But here we’re showing that we can lead the poorest sectors of the working class.”