Mexico: So Far From God, so Close to the United States

US imperialist penetration in Mexico exists on many levels, profing off of the flow of goods, but limiting the flow of people. The War on Drugs, as well as the huge demand for drugs created an intricate web of violence on the Mexican border. 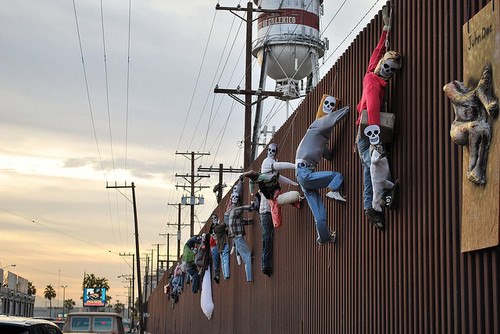 The following talk was given at the Historical Materialism Conference, New York 2017

Internationalism is a strategic necessity. Efforts to fight capitalism will come to nothing without solidarity between workers of all countries. To paraphrase Marx, class struggles are national in their form and international in their content. The left and the American working class cannot defeat capitalism if they do not remain conscious that US imperialism actively oppresses and exploits the semi-colonial world. In this talk, I hope to touch upon the ways in which the U.S. oppresses and exploits Mexico and the effects this has on Mexican society.

I am going to explore the transformations in Mexican economy, politics, and society after 25 years of NAFTA and the emergence of a new working class. This new working class is invisible to many leftists and academics in the U.S., which tend to focus solely on the incredible levels of violence suffered as a result of drug trafficking and femicides, like infamous case of the 43 missing students in Ayotzinapa.

In Mexico, class struggle in the last quarter century has been led by the allies of the proletariat — the peasants and native peoples. This strengthened the argument that talk of the working class today is anachronistic for both intellectuals and most of the Mexican Left.

I don’t think it is at all anachronistic to discuss the Mexican working class. In fact, it is central to developing an understanding of global production and the U.S. economy. The global working class is currently very heterogenous due not only to national differences but also because, in the last 25 years, a new global division of labor has emerged.

As a result of Mexico’s transformation into a manufacturing export platform for U.S. industry and the trend towards the replacement of oil exports by manufacturing companies and the growth of the automotive chain of production in recent years, Mexico has a proletariat of about 42 million employees, of whom at least 11 million are in manufacturing, oil, and mining. And the most important aspect of the situation is that this proletariat, which remained dormant and did not mobilize for a long time, has begun to wake up.

As the Mexican proletariat became larger, their living conditions worsened to historic lows, as did the living conditions for most Mexicans today. Imperialist penetration, like any “civilizing process” in capitalism, created monstrous phenomena such as drug trafficking, femicide, human trafficking, and migration in subhuman conditions with countless deaths of people trying to cross the border.

I am going to explore three aspects of US imperialist penetration — drug trafficking and the war on drugs, NAFTA and its consequences, and the situation of the working class.

Mexico shares 3,200 kilometers of border with the United States. We have a saying that goes “Poor Mexico, so far from God and so close to the United States.” We do not refer to the American workers or people of course, but to the government. U.S. intervention in Mexico has been a phenomenon since the 19th century, but it has escalated in the past 25 years. On January 1, 1994, the North American Free Trade Agreement (NAFTA) was put into effect; at the same time the Zapatista rebellion broke out in the south of the country with the slogans: “Abajo el Mal Gobierno” (“Down with the Bad Government”) and “Stop NAFTA”. The implementation of NAFTA began an economic cycle in Mexico that is now in crisis, not only because of the economic cataclysm of 2008 but also because of the rise of Donald Trump.

Mexico exports labor, raw materials, and narcotics to its northern neighbor, while the United States invests a massive amount of capital, which gave birth to the maquiladora corridor on the northern border. The mining industry, the oil industry, and agricultural businesses depend on this capital, and the U.S. has given life to legal and illegal tourism industries such as trafficking — both organ trafficking and human trafficking. Goods, capital, and people are constantly crossing the border, both legally and illegally. This constant flux gives illegal economic sectors unique characteristics. Specifically, the U.S. demand for immigrant labor, sex trafficking, and drugs has created an economic niche that exists on the “margins” of the state but, at the same time, is supported by the state.

The dispute is violent, and I do not mean this symbolically. Organized crime uses paramilitary groups to defend their market and at the same time, in association with the state, uses violence against the poor and working class. A infamous example of this was the murder and torture of 100 migrants in Tamaulipas in 2013. They were in a truck attempting to reach the US when traffickers stopped them and attempted to recruit them to the drug cartels. Because these migrants refused, they were brutally murdered. Other victims of organized crime include those who stand in political opposition like the 43 students of Ayotzinapa.

Their role as privileged distributors of cocaine and amphetamines to the United States has conferred exorbitant power on Mexican cartels, and they now operate as large global capitalist corporations in several countries. Ultimately, the market for narcotics and other illegal industries quickly generates a massive amount of capital, which is then put into circulation through money laundering.

The response of the Mexican and U.S. governments to the growth of drug trafficking was militarization, which only increased the violence. The so-called war against drug trafficking that been waged against Mexico for more than 10 years was mandated by the White House under the instruction and operation of U.S. intelligence agencies and the armed forces. The results have been devastating. Even the most conservative figures estimate 160,000 people have been killed, 25 million have been displaced, and anywhere from 25,000 to 45,000 have gone missing.

I am going to go on to discuss NAFTA and its effects on the working class, but to understand Mexico it is essential to understand that all of these events are occurring in a very violent context.