Candidates of Left Voice’s sister organization in Brazil are running for office in several parts of the country, raising the perspective of independent working-class candidates in the elections and in the streets as an alternative to most of the Left, which seeks to continue the path of conciliation with the bourgeois regime. 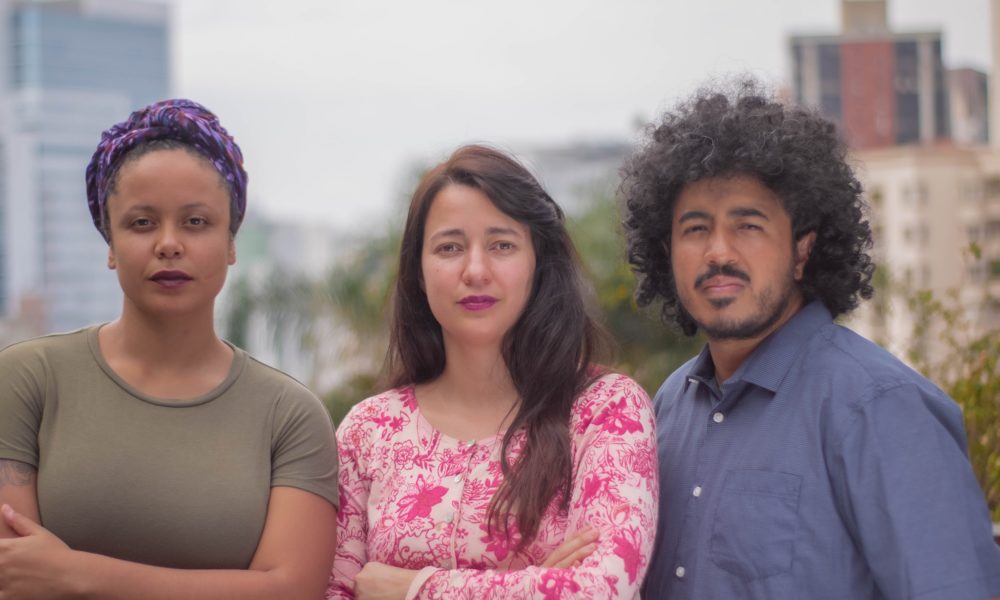 We interviewed Diana Assunção, Marcelo Pablito, and Letícia Parks of the Bancada Revolucionária de Trabalhadores (Revolutionary Workers Caucus), candidates of the Movimento Revolucionário de Trabalhadores (MRT, Revolutionary Workers Movement) for city council in São Paulo, Brazil. They are challenging the Bolsonarist government and the entire political regime, which has become more authoritarian and anti-working class ever since the 2016 institutional coup against the government of the Partido dos Trabalhadores (PT, Workers Party) and was aimed at toughening the PT’s own attacks.

Marcelo Pablito is a longtime restaurant worker at the University of São Paulo (USP) who has been serving students and employees for about a decade. He spends every working day among workers, mostly Black, who suffer from precarious work that destroys their bodies with the daily overload of serving thousands of meals with a much smaller number of employees than necessary. He founded the Red Quilombo, a revolutionary, anticapitalist grouping of Blacks, and stands shoulder-to-shoulder with the struggles of Haitian and African immigrants here in Brazil. He is also the author and editor of books on the Black question and Marxism, along with Letícia.

Letícia Parks is a professor and has become well known for her defense of delivery workers and working-class youth. As a student at USP, one of Brazil’s most elitist universities, she was in the front lines of the struggle to implement racial quotas to open up admissions for oppressed minorities. She was also a leader of several other struggles for the democratization of higher education in the country. In strikes and student mobilizations, she has long promoted an alliance with university workers, and she has fought to end Brazil’s Vestibular university entrance exam that acts as a social “filter” to enforce elitism, and for access to higher education for all.

Diana Assunção has worked at USP’s Faculty of Education for a decade, and along with Pablito stood shoulder-to-shoulder with the mostly Black university cleaners in their fight against their outrageous working conditions and low salaries. Based on these struggles, she edited A precarização tem rosto de mulher (Precariousness Has a Woman’s Face),1 a book that reaffirms the importance of the strategic struggle of outsourced and precarious workers for full employment. She has also contributed to several books on women’s issues, including Bread and Roses, Fighters, and Feminism and Marxism, and has written prefaces to the Brazilian editions of Woman, the State, and Revolution by Wendy Z. Goldman and Rosa Luxemburg: Ideas in Action by Paul Frölich.

Please tell us a bit about who you are and the campaign you have launched.

Diana: We are workers and militants of the Revolutionary Workers Movement, Brazil’s section of the Trotskyist Fraction–Fourth International, which publishes Esquerda Diario as part of the La Izquierda Diario international network — of which Left Voice is also part. Brazil has a very anti-democratic electoral system, with many obstacles that keep parties from obtaining the legal status needed to run candidates, and keeps independent workers from running. So, it is a common practice for left-wing parties that do have ballot access to open their lines for other organizations to run. In our case, we are running on the ballot line of the PSOL,2 but defending our own ideas.

We are a collective candidacy, a practice in Brazil of running more than one candidate for the same position. We are running to raise the voice of the workers against President Bolsonaro’s reactionary government, not only in opposition to him as president but also against all the institutions of the regime that attack our rights — as with the pension reform and now the administrative reform project they are planning. We believe this is fundamental, and we have been debating with the Left over the mistake of opting to administer this or that element of the coup regime rather than confronting it in totality.

In addition to São Paulo, the MRT is also running candidates Valéria Muller in Porto Alegre and Flávia Valle in Contagem, Minas Gerais.

In Brazil, the MRT organizes workers, youth, women, Blacks, and LGBTQ people around a revolutionary socialist program. We have subway workers, teachers, university workers, industrial workers, app delivery workers, and road workers, and we also have a presence in the student movement at several universities throughout the country. We fight to build a revolutionary party of the working class in Brazil to overcome the class-conciliation strategy of the PT that led it to govern for more than a decade defending capitalist interests, and in the end offered no serious resistance to the institutional coup that put Temer in power and paved the way for Bolsonaro.3

How do you see moving this fight forward against Bolsonaro and the coup regime?

Pablito: We think the results of the U.S. presidential election are going to have a strong impact in Brazil, because Bolsonaro is a genuine Trump bootlicker. From our perspective, the fight against Trump and the extreme right in the United States demands complete political independence from Biden and the Democrats, we are fighting against the whole of U.S. imperialism to which the peoples of Latin America and the world are subjected. For all these reasons, we are fighting to remove Bolsonaro and Vice President Mourão from power. Unlike other sectors of the Left, though, we don’t think this will happen at the hands of the current Congress, which legislates attacks against us, or by the Brazilian judiciary, which is gaining more and more political weight and grows increasingly authoritarian. We fight to organize workers and the oppressed to impose a Free and Sovereign Constituent Assembly to repeal their reforms, put an end to the caste of politicians and judges who attack us, and take up laws that serve the interests of the great majority. We know this means facing state repression and advancing the need for the self-organization of the working masses. Through this process, we fight for a workers’ government that breaks with capitalism.

What is the program you raise to guarantee the interests of this exploited and oppressed majority?

Leticia: We call for an end to the payment of the billions in public debt, a truly illegal and fraudulent drain on the country’s public budget, each year feeding the profits of bankers and speculators while health, education, and housing are destroyed. Now the government even wants to end the emergency aid that, in the midst of the pandemic, has been the only way to sustain millions of people.

Pablito: We watch as the bourgeoisie gets richer and richer in the midst of a crisis they caused. It is imperative that their great fortunes be taxed, that we prohibit layoffs, that we put an end to the outrageous and age-old wage inequality between Black and white workers and between men and women. We propose a massive public works plan and the expropriation of large property owners as part of a radical urban reform that will guarantee a home for the thousands of people living on the streets in the middle of a pandemic. We demand basic sanitation and decent living conditions for families.

How do you see the Brazilian Left in the context of these elections?

Diana: Wherever we are, we fight to keep the Left from taking the path the PT followed, which was to administer the capitalist system. Today, the PT is allied with the PSL (Partido Social Liberal, Social Liberal Party) — Bolsonaro’s party — in more than 140 cities in the country, but also with many of the coup plotters. Unfortunately, the PSOL in several places has joined coalitions with conciliatory parties such as the PT and the PCdoB, but even with coup parties and right-wing parties, including the MDB, DEM and PSDB, as well as other groups such as the REDE of Marina Silva or the PDT of Ciro Gomes.4 In Rio de Janeiro, it is even running a former commander of the Military Police, one of the most murderous cop agencies in the world, as a candidate for vice-mayor.

At the same time, if the Left presents a program that fails to confront the regime and leaves capitalist profits untouched, it is essentially just running on a more “left” version of the PT’s policies. We fight for the political independence of the workers and for a different path, one that views elections not as an end in themselves for the purpose of accumulating positions within the state, but rather as another battlefield upon which we can amass working-class forces to fight the bosses with the methods of class struggle — like our strikes, pickets, and workplace organizations. We see the tragic examples of Podemos in the Spanish State and Syriza in Greece governing for the bourgeoisie, and we counterpose the example of our comrades of the PTS in Argentina, Nicolas Del Caño and Myriam Bregman — revolutionary parliamentarians who are always in the middle of the struggles of the workers and youth as part of the Workers Left Front – Unity, the only class-independent political formation in that country that has as its program the struggle to make the capitalists pay for the crisis.

How has the campaign been going?

Letícia: We’ve been waging a fundamentally militant campaign. Since we don’t have our own legal status, we don’t have an official electoral fund and so we are financing our candidacies with nothing but contributions from our supporters — youth and workers who believe in our ideas. We have hundreds of supporters distributing pamphlets, convening campaign meetings, and building committees in several neighborhoods in the city. This has an important differentiator for us, because we are the only candidates who explain that we will not win our demands only in one city but that we must build a nationwide working-class struggle against the government and the entire institutional regime. That’s why we feel empowered by the hundreds of teachers, subway workers, bank workers, delivery workers, healthcare workers, telemarketers, workers from the University of São Paulo, outsourced workers, domestic workers, and all the youth who are building our campaign with strength.

We’ve taken our campaign to workplaces, subway stations, the favelas, and workers’ neighborhoods. It has been a very important experience, with the participation of many workers and young people who repudiate Bolsonarism and are also disillusioned with the PT’s policy of conciliation. Among teachers, subway workers, and others, dozens and even hundreds have declared their support of our candidacy. We have raised thousands of reals in contributions from our supporters, which has allowed us to spread our ideas completely independently of the state.