The Blackjewel miners’ fight shows the power of worker self-organization, but it also offers a glimpse into the profound need for a fair and just transition away from coal that protects workers as well as the environment. 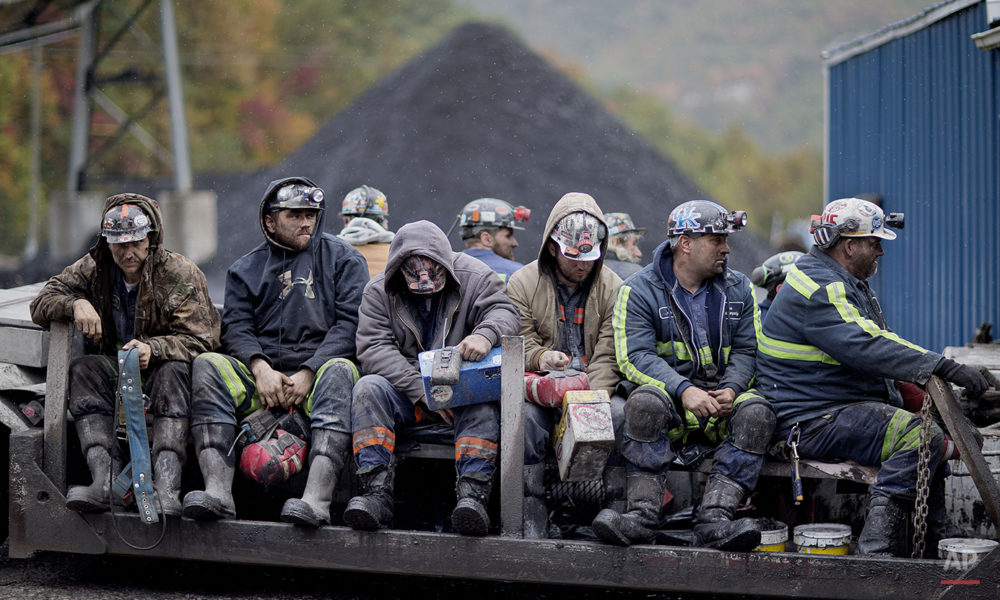 In this Oct. 15, 2014 photo, coal miners return on a buggy after working a shift underground at the Perkins Branch Coal Mine in Cumberland, Ky. (AP Photo/David Goldman)

In a scene reminiscent of the Harlan County coal wars of the 1930’s, a ragtag group of Blackjewel coal miners in Cumberland, Kentucky are blocking train cars filled with more than a million dollars’ worth of coal from leaving the mountain. The miners who were laid off early last month with little notice and no severance, say they are still owed hundreds of thousands in back wages and are refusing to leave until they get paid. The blockade, which has been going on for almost two weeks, began on July 29, when laid-off miners heard word that the company, which had filed for bankruptcy on July 1, was planning to move several trainloads of remaining coal to market. Realizing that the fruit of their labor was in those cars, and with no guarantee of ever getting what they were owed, the miners immediately moved to stop the trains. Since then more than 100 miners and their families have participated in the blockade, winning the support of their community as well as local and even national politicians.

This action shows that workers have the power and the popular support to act directly in their own interest and the interest of their communities, whether through strikes, occupations, take-overs, or blockades such as this one. While the demands of the miners are modest—they simply want what they believe is owed to them—their impact has been far-reaching and they deserve much more than what they are asking for. As the miners wait to see how yesterday’s bankruptcy decision will affect them, their self-organization shows that they could win more than just back wages if they continue to stand strong and organize with other Blackjewel miners in Wyoming, Virginia, and West Virginia. Such a stepped-up struggle could force any new purchaser of the mines to rehire all of the laid-off miners and could be used to win union representation able to provide them some kind of protection from future layoffs. But there are no guarantees under capitalism, and even were they to regain their jobs, even were they to win a union, they would still face an uncertain future for two important reasons.

First of all, the company that sold out these workers, Blackjewel and its CEO Jeff Hoops, has a history of buying up and liquidating struggling coal mines, stripping them of any value and then filing bankruptcy, often refusing to pay creditors or employees in the process. And there is little reason to believe that any future owner would be any better, unless the workers took over the mines themselves.

As Sarah Lazare of In These Times suggests, these workers are facing their own extinction, but they are also therefore poised to force a nationwide discussion of the need for a fair and just transition away from climate-warming coal toward more renewable and clean sources of energy. While a just transition under capitalism is unlikely, these workers have the power to raise awareness about their conditions and to become a link in a chain of organized mine workers ready to fight for a better future for themselves and their children by demanding guaranteed training and good paying jobs that do not pollute the environment.  As one of the Blackjewel miners, Josh Hollbrook, put it:

“Come to where we live, come to a small town and tell people how it’s affecting the environment and how we can change it. If stopping coal mining is how we can change it, then bring jobs in. Money talks. There’s so much unused property here, unused real estate, prime for putting in factories, auto plants, anything. It’d be great if someone wanted to do something like that, put their money where their mouth is. Bring jobs in. We have nothing here. Without coal, there’s nothing here.”