What does working class independence mean? How should we orient towards the labor movement? 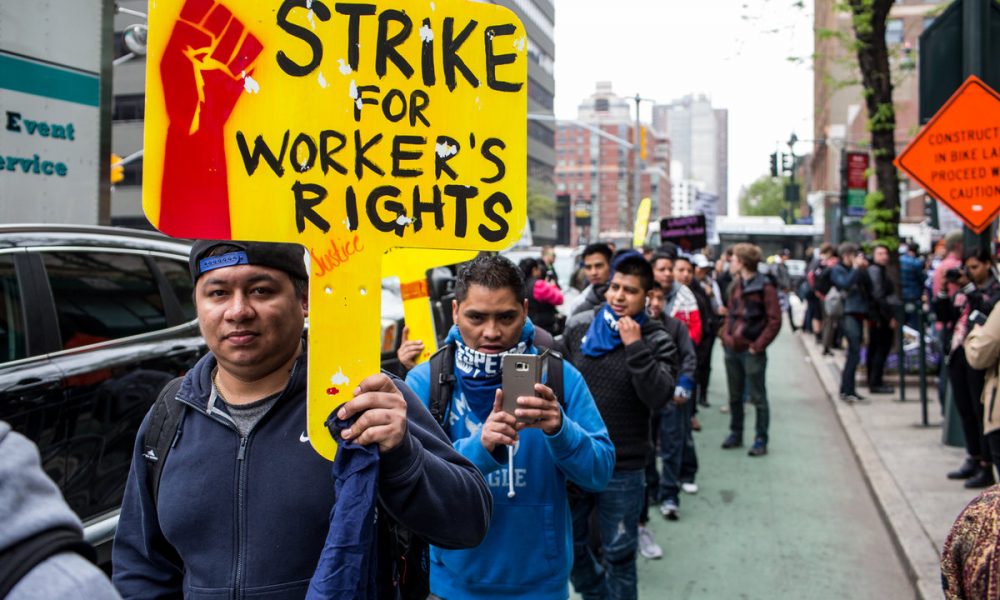 Image from Gothamist by Scott Heins

In conversations inside and outside our collective, Red Bloom continues to refine a practical concept of ‘working class independence’. This piece is adapted from a talk given by our comrade Kate G. at Marxist Center Conference hosted by the Philly Socialists.
This article was originally posted in Red Bloom: A Communist Collective

How should we orient toward the existing labor movement?

Communist and socialist revolutionaries cannot abandon the workplace as necessary site of struggle. Existing unions in particular present specific opportunities and challenges for organizing. The unions we have represent a small fraction of the overall waged working class, but they were brought into existence by previous eras of worker struggle—and as a result retain varying degrees of and mechanisms for protection for workers in terms of discrimination, workplace conditions, political expression and organization on the job. Three crucial consequences flow from that 1) workers in unions have more capacity to fight for improvements to all of the above and organize without being fired and 2) sections of the working class that are often discriminated against and whom are among the most politicized by social movements are overrepresented in existing unions (Black workers are unionized at a rate of 14.5% compared to 11.7% for white workers). Finally 3) workers with particular power to disrupt production and distribution are overrepresented in the unionized work force, along with those who have significant social weight in terms of “reproductive choke points” in schools and hospitals (Education and Library occupations are unionized at a rate of 34.6% and social service occupations at 14.8%). It is also often easier for revolutionaries to participate in sustained workplace struggle, build relationships on the job and develop political perspectives and practice with co workers where they have some form of security and recourse.
These are important reasons for revolutionaries to be in unions, both in terms of who we can reach and in terms of sustaining ourselves. Most of those reasons are also compelling reasons for us to support new union organizing of unorganized workplaces.
We also recognize that the existing labor movement has been deformed by bureaucratic class interests that often demobilize workers struggles, segment the class even in one workplace into multi-tier contracts, and reinforce racialized, gendered, and national labor market exclusions as well as prioritize profits, austerity, and its own survival over broad class interests and even over narrow bread-and-butter matters. For these reasons we support caucusing (revolutionary and reform as well as womens, queer, black and other POC caucuses) in existing unions, and organizing in unions as open revolutionaries/socialists.
The existing labor bureaucracy is also a major component of the democratic party coalition and through its own election efforts and various experiments has been a vector of containment and demobilization of workplace and social movement struggles; for socialists who work as employees of unions, participation in this is non-optional, as is, often, closeting their revolutionary politics. Likewise, those who win election from the ranks with thin support can face similar pressure. To combat this, we propose limiting runs for executive and local union office to situations in which a strong shop floor and/or steward network has been developed.
In sum, we think revolutionaries should engage existing unions as members, by building shop floor organization and militancy and by putting forward broad class politics as open revolutionaries. As time goes on we hope to develop more detailed perspectives on a number of these particular points and the relationship between them, based on the past and ongoing experiences of our members with various attempts at organizing in new and existing unions. In these formations on the shop floor, and in the labor movement more generally, the goal is to build a left/revolutionary “pole” that can develop, amplify and demand key aspects of broad class politics, the shape of which we believe can only be developed in struggle and through working class organizations, but historical examples of current relevance could include universalizing set work schedules and shorter work weeks, universal health care and child care, etc.

What should be our relationship to the Nonprofit Industrial Complex?

Non-profit organizations have related but distinct opportunities and limits. They have a more varied history of origin in class struggle; some are born that way and others are distinctly not. In addition, they are likely to have internal democratic mechanisms and where they do these are not legally enforceable within an 501c3 framework, a legal form of corporation. Even more than unions, revolutionaries are often paid staff members hired to carry out the political perspectives and organizing tasks of the firm rather than their own, or those of a revolutionary organization, presenting the same problems with respect to the Democratic Party described above in terms of the labor movement. NGOs can provide crucial services to working class communities but are often depoliticizing and demobilizing.
With that said, when NGOs are formed as a consolidation and self-defense of class struggles for control of social reproduction—as has happened repeatedly in the realms of health care, community education, food provisioning and anti-violence projects—they can be sites where working class activists reproduce ourselves, our communities and radicalize. We can’t shun engagement with all NGOs; we are supportive of workers struggle with and within them as staff and as clients, and similarly pursue broad class perspectives and objectives that push past the limits of the form as well as independent efforts to defend rightwing attacks on the social provisioning organized through NGOs. For example we support the defense of planned parenthood against right wing assault, but not its demobilizing of patients and Democratic Party lobbying efforts. We believe that past struggles for AIDS drugs and research represent an example where revolutionaries crucially engaged with NGOS as part of a broad strategy for mutual aid and campaign for reform. Now, we view BYP as an example of an NGO formation that represents ongoing class militancy, political development and mobilization around police violence and incarceration, and see demands arising from that struggle—within and outside NGOs—for police and prison abolition as crucial class demands.
As with unions, we should continue to develop our analysis of specific NGOs and the non-profit industrial complex more generally as organizations that contain class division by definition, creating distinct political and economic interests between workers, clients and bureaucratic administrators.

How do we understand the role of the Democratic Party, and what should be our orientation toward it?

The Democratic Party is a bourgeois party with neither the interest or likely the capacity to produce meaningful reforms for the working class. Worse, it has over the last 40 years failed to defend the most basic necessities for the reproduction of the working class despite presenting itself as a “lesser evil” and the last line of defense against open white supremacy, queerphobia and misogyny, and direct attacks on unions. It’s played a leading role in the mass incarceration of black working class people, in negotiating away reproductive rights and access to “welfare” including child care, and been at the forefront of the resegregation and privatization of public education. The Democrats have a long history of absorbing and demobilizing working class coalitions, and transforming left wing movements into electoral support for war, austerity, and deregulation.
Because of the nature of the Democratic Party and the record of defeat and cooptation, revolutionaries should ultimately support the development of an independent working class party; while there is a lot of debate on the socialist left about this right now, this weekend, there is not a clear path to that outcome; recent history is littered with failed efforts at inside/outside strategies like those proposed by various factions in the DSA, or in New York, the Working Families Party, along with a failed attempt in the 90s at developing a Labor Party rooted in labor bureaucracy.
For a possibility of working class independent electoral power to emerge, a greater degree of working class organization and militancy is required; in the current period, we aim to focus energy into building organization in workplaces and outside of them *rather* than active support for socialist candidates in electoral races inside or outside of the Democratic Party.
We arrived at this conclusion both through the study of revolutionary history, but most importantly through the observation of current conditions. There have been several left electoral victories and near misses in countries around the world in the last 15 years. In cases where social democratic forces have prevailed at the ballot box, they’ve run aground on the political unity and economic power of the ruling class in the EU, or in Latin America, of Washington and national bourgeoisie, opening the door for organized reaction combined with disorientation of the left and working class. The nearest “near miss” in the United States, the surprising Bernie Sanders phenomena which made “socialism” a commonplace word and concept in American politics for the first time in a long life time. But the leadership of the Democratic Party made it plain that they prefer to lose an election than to lose power within their party. The subsequent growth in socialist organization mean that many Bernie supporters recognize that problem, though a coherent solution to it has not developed. Some argue that campaigns at local levels can overcome the power of the DNC. But this perspective tends to underestimate or ignore the local machine base and its tight grip on local politics—including NGOs and unions—in major urban areas. So it’s both not possible to have another Bernie at a national level, we don’t have independent forces at a local level, and if we tried to make it happen again, we’d be wasting precious time that could have been spent on building the interest in socialist and working class organization that his campaign fomented.