Nurses across the city gear up for a major strike authorization vote. 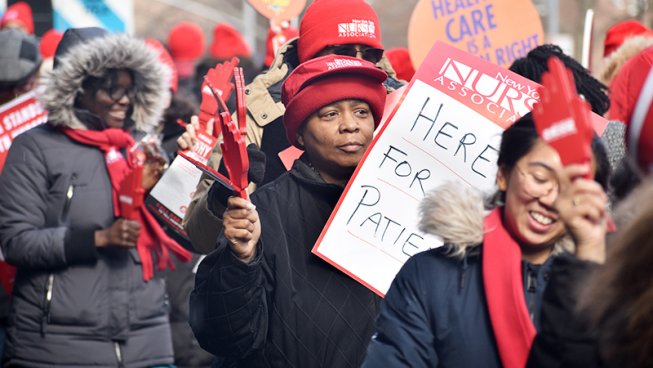 New York, NY: At the epicenter of finance capital, a short walk from Trump’s gleaming Tower and a quick subway ride from Wall Street, thousands of nurses are in a heated battle for safe staffing and for hospitals to put “patients over profits.”

Upwards of 10,000 nurses with the New York State Nurses Association (NYSNA) have joined forces to bargain against their employers – Mount Sinai, Mount Sinai West, St. Luke’s, NY Presbyterian/Columbia, and Montefiore – which are among the highest-grossing and largest employers in the city.

With the banner for staffing ratios held high, nurses are fighting for more control over the intensity and rate of their work – the very crux of their working conditions; these terms often go untouched in routine bargaining cycles, where the focus tends to be cost of living increases and benefits.

After months of nearly fruitless negotiations, NYSNA nurses have ramped up their fight with a “safe staffing” publicity campaign and informational picketing across the city. By 11:00 am today, pickets were set up at thirteen locations. Thousands of nurses, labor and community allies demonstrated passionately with signs of “Healthcare is a Human Right,” and “Safe Staffing Saves Lives!”

On Tuesday, Alliance hospital executives sent emails to employees saying staffing ratios “would devastate our patient-first staffing approach.” They defended the current model of “tailored, flexible staffing plans” and stated, “One size does not fit all.”

Hiding corporate greed behind the nebulous concept of flexibility, Alliance hospitals have been obstinately against staffing ratios. In negotiations, they have refused to consider patient-maximums per nurse. In a classic neoliberal fashion, corporate freedoms are prized and protected while worker and community rights are somehow presented as overregulation.

It’s too soon to tell how this contract fight will pan out for nurses, patients, or the mega-hospitals involved. Although nurses have historically voted ‘yes’ to authorize a strike, it has been decades since NYSNA has organized a massive work stoppage at these facilities.

Olessa Turner* works night shifts on a telemetry unit and has pushed for increased staffing on her unit for years: “How are we expected to make our patients feel safe and secure in the delivery of our care, if at times we ourselves don’t feel safe in our practice? These hospitals have spent so much money on recruitment, but what about retention? One-to-four safe staffing ratios would help.”

With 25 years of experience, Turner is a rarity. Over the years, she has seen scores of nurses come and go, buckling under the weight of increasing patient complexity, charting, and inadequate staffing. “I can’t imagine starting nursing now. I remember back then, I could have 9 patients and manage without the feeling of doom or fear. Now nursing is much more complex, our patient acuity level is extremely high. The stress is felt by everyone.”

Nurses and nursing assistants experience some of the highest rates of occupational injuries, assault, and harassment when compared to other industries (Bureau of Labor Statistics). While nurses on the picketlines emphasized the dangers to patients, they also pointed out how the lack of patient caps was detrimental to a workforce that is vastly female, immigrant and of-color.

“It’s not a coincidence that us nurses – many of us women, Black, Brown, and Asian – are just expected to sacrifice our bodies while hospital executives’ pockets get fatter. Their main drive is profit and they get it by squeezing us. They’re exploiting our hearts and the care of patients. That doesn’t have to happen. We don’t have to suffer and be overworked in order to do right by our patients,” said Toni Klein, an RN working in an intensive care unit at Mount Sinai.

The rationale for staffing ratios, ie., patient caps or patient limits, comes to nurses like second nature and has also been exemplified in research. Some studies have shown increased rates of mortality in hospitals that don’t have patient limits. A study in the Journal of Emergency Nursing (March 2017) shows that more patients per ED nurse prolongs emergency room wait times. Another study in Medical Care (January 2016) shows that patients who suffer a heart attack during an admission are more likely to survive in facilities where nurses have safe patient assignments.

Vanessa Thompkins is a union shop steward who has worked the night shift on a general medicine unit for over a decade: “The floor is so busy, we have very sick patients – dressings, wound care, patients requiring complete assistance. When it comes to safe staffing ratios, all I can say is, it saves lives.”

Like many other rank-and-file nurses, Thompkins has become galvanized by the months-long battle for a contract, fighting for improvements to her worklife, health, safety, and care of patients.

In the coming weeks, Thompkins and 10,000 nurses will undergo a strike authorization vote to determine whether union leaders can call for a strike when the time comes. Judging by the massive turnout today, it seems probable nurses will give the go-ahead.

It’s too soon to tell how this contract fight will pan out for nurses, patients, or the mega-hospitals involved. Although nurses have historically voted ‘yes’ to authorize a strike, it has been decades since NYSNA has organized a massive work stoppage at these facilities. Most of the nurses have never experienced a strike first-hand. However, the explosive example of the recent LA teachers’ strike may serve as a bright light for nurses when considering the immense power that lies in their hands.

*Names have been altered to protect the identity of interviewees.