Oaxaca: the people return to the streets and confront repression 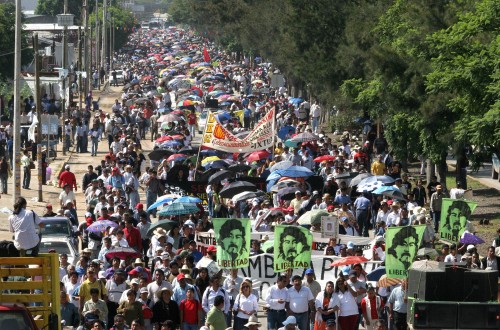 A year ago at this time, the people of the capital of Oaxaca, led by
Section [local] 20 of the SNTE (teachers’ union) and the Asamblea
Popular de los Pueblos de Oaxaca (Popular Assembly of the Peoples of Oaxaca, APPO), seized the streets to conduct
their own people’s Guelaguetza1. With a march of more than 1
kilometer, the APPO began the alternative fiesta, which until a year
ago was the inheritance of the big businessmen, hotel owners, and
tourism tycoons2. With traditional dances, parades, floats (“carros
alegóricos”), fireworks, the people of Oaxaca once again took over the
main streets of the historic center. On the same July 16, the day of
the megamarch – the biggest since last year’s repression – a
contingent of at least 10,000 teachers, workers and young people,
moved forward to the Hotel Fortín, where the government of the tyrant
Ulises Ruíz would carry out its Guelaguetza, to seize the auditorium.
Police attacked the contingent with tear gas, rocks, sticks and clubs,
while meeting resistance from the youths and teachers who fought for
four hours. Like they did a year ago, they used barricades for
self-defense, from which they returned the tear gas to the police. For
a moment, the teachers and the young people had control of the
situation and made the repressive forces retreat; however, the police
finally managed to drive the demonstrators back, with a toll of 50
people wounded, more than forty arrested, and two people disappeared
so far.

What is beginning to be known as “the battle of the Fortín,” and the
megamarch, are a forceful expression of the fact that, in spite of the harsh blow received last year, the popular movement of Oaxaca, far from disappearing, is being repaired. The APPO has shown that it still enjoys big influence over sectors of the masses of the capital of Oaxaca. And it is a fact that last year’s process could be interrupted by repression and the politics of the leaderships, but not closed; the demands and claims that accelerated the emergence of the heroic Oaxaca Commune continue to be strong: the resignation of the hated repressor Ulises Ruíz, and putting an end to the conditions of poverty, exploitation, and marginalization that the people and the workers are suffering. On the one hand, the government of Ulises Ruíz has maintained itself thanks to the club, and on the other hand, thanks to the conciliatory politics of sectors of the leadership of the movement. Dozens of political prisoners are still in the jails of the tyrant, and forced disappearance has become commonly used, like the recent disappearance of two militants from the armed group EPR.

The process of recomposition shows that the radicalism of the masses of Oaxaca, brought to bear last year, has had a profound effect on their state of mind and fighting spirit. We are facing an open process, and “the battle of the Fortín” could be a new milestone to revive the struggle of the people of Oaxaca and have a profound impact on the workers that mobilized in recent months against the ISSSTE law (see La Verdad Obrera #239).

Down with Ulises Ruíz!

Long live the struggle of the APPO and the people of Oaxaca!