Off to Protest Against Donald Trump and Friends at G-20

Friday and Saturday will be the G-20 talks in Germany, where world leaders will be protected by thousands of police as they discuss ways to make the working class pay for the global economic crisis. 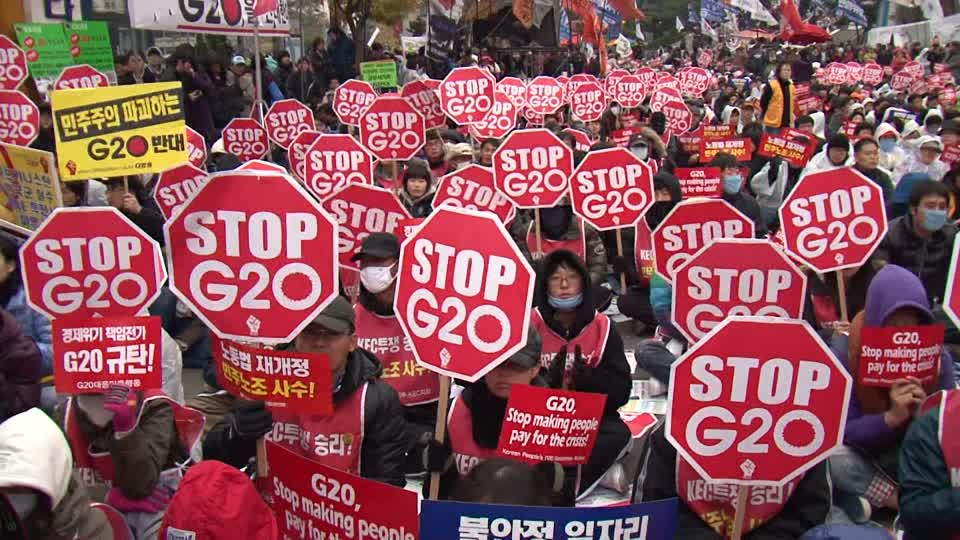 Image from Framepool from the G-20 Summit in Seoul.

By the time you read this, I’ll be in Hamburg.

This Friday and Saturday, the G20 summit will take place in Germany’s biggest harbor town. It’s a Who’s Who of the world’s most evil people: Trump, Putin, Erdogan, Macri… Are they sad that Michel Temer of Brazil and King Salman of Saudi Arabia had to cancel at the last minute?

These 20 evildoers will be protected by 20,000 police. The whole thing will cost at least 130 million euros of taxpayer money – and probably a lot more.

The summit is still two full days away, but the German repressive apparatus is already in high gear. The police are trying to prevent activists from setting up camps, beating and pepper spraying anyone with a tent.

Germany’s constitutional court had declared that such camps need to be allowed. But the Hamburg police, under the leadership of the SPD/Green government, is simply ignoring the ourt’s decision.

Denying people sleep is a form of torture. Activists are now trying to set up tents all over the city as a form of civil disobedience. The interior minister said that people could rent a hotel room. Do politicians have any idea what hotels cost?

Back when I was in high school in the US, I followed these “summit storms” on TV: Against the WTO in Seattle in 1999, against the G8 in Genoa in 2001. My first experiences up close were in Barcelona in 2002 and in Geneva in 2003. I know that a big demonstration in a militarized city isn’t going to topple capitalism. But it will radicalize a lot of young people.

The capitalist press acts like these demonstrations will be some kind of apocaplyse. But it never ends up being more than a few broken windows, maybe a burned car or two. How can you possibily compare this to the destruction rained down upon Syria by Trump, Erdogan and Putin? And that’s just Syria!

Of course I’m a bit nervous too. Who wouldn’t be? But if we let ourselves be guided by fear, then the Trumps and Putins and Erdogans have already won. So see you in Hamburg!