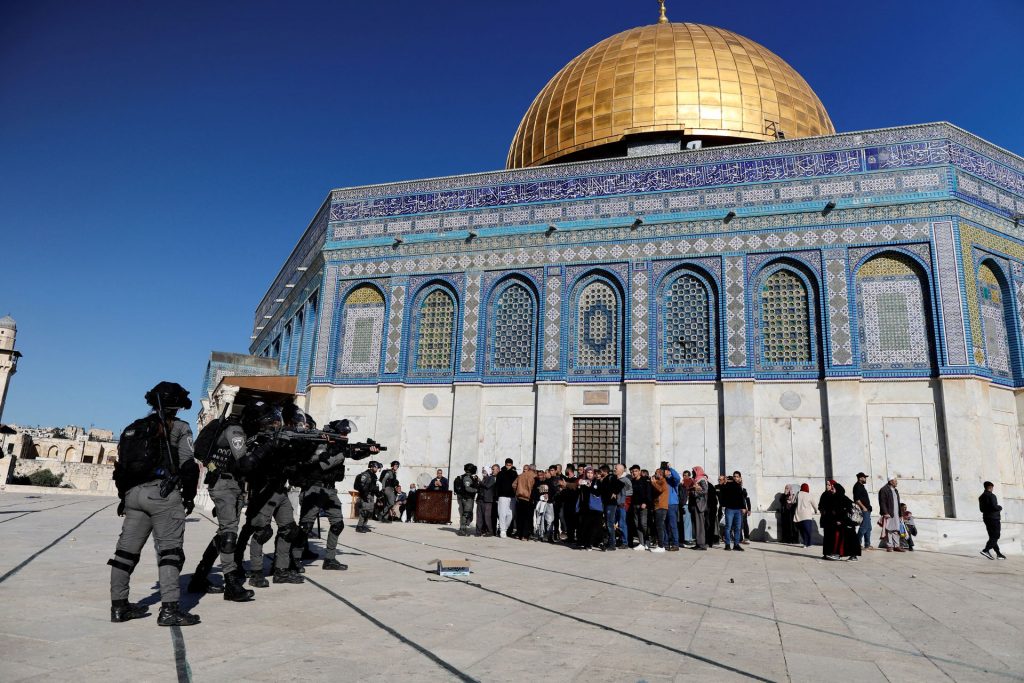 This morning, Zionist police and occupation forces stormed and violently raided the Al-Aqsa Mosque, the third-holiest site in Islam, with a premeditated offensive mission. A blatant attack was launched against worshippers inside, using sound grenades, smoke grenades, tear gas, rubber bullets, and live ammunition (as shown by Times of Gaza). This attack has injured 224 Palestinians thus far, and several hundreds more have been detained. According to the Palestine Red Crescent, injuries “were due to rubber bullets, sound grenades or assaulting. Dozens of other injuries were treated in the field.”

The architectural structure also suffered significant damage, from the impact of the explosive devices detonated indoors by occupation soldiers, as they were seen arbitrarily destroying windows and entrances with grenades, bullets, and the rears of their guns (as shown by Eye on Palestine). This heinous act takes place amid Ramadan celebrations, which started this year on April 1 and will carry on until May 1.

Al-Aqsa, which is of monumental religious importance to Muslim worshippers, is also a symbol of resistance, culture, and identity for Palestinians. For Friday prayers, Palestinians gather at the holy site in the thousands. During the month of Ramadan, Al-Aqsa becomes far more frequented for nightly celebratory rituals and prayers.

The Zionist occupation forces routinely carry out violent onslaughts against Al-Aqsa and its worshippers during Ramadan. On May 7, 2021, during crowded and highly attended Ramadan prayers on the final Friday of the holy month that year, Zionist soldiers stormed the courtyard and mosque, injuring more than 170 Palestinians and detaining hundreds more, using military-grade weaponry, as in today’s attack.

This attack falls within the context of a larger, violent campaign of erasure against Palestinians in all occupied territories, a campaign that is undergoing its routine escalation this year. Several neighborhoods have been raided and vandalized in the occupied territories, and in 2022 alone so far, at least 25 Palestinians have been murdered by occupation police, 16 of them this April. Eight of the 25 martyrs were aged 14 to 17, and four of these died in April alone. Mohammed Zakarneh, 17, was murdered in Jenin on Sunday, April 10, by occupation forces. Yamen Jaffal, 16, was killed by an occupation soldier’s gunshot in the village of Abu Dis on Sunday, March 6.

The attack on Al-Aqsa comes nearly a year after a global uprising took place in solidarity with Palestine, after a bombing campaign was launched against Gaza, wounding thousands, killing hundreds, destroying much of Gaza’s infrastructure, and hindering its ability to manage the Covid pandemic. The Israelis bombed homes, schools, mosques, hospitals, and the only Covid lab in the area. Illegal eviction campaigns also increased in the occupied territories, creating one the biggest movements in solidarity with the Palestinian cause. We need to continue efforts surrounding international solidarity with the Palestinian people fighting for their liberation.