Locals in Portland tried to save hundreds of pounds of food thrown out by a grocery store to help feed those affected by the recent storms. Police stopped them. 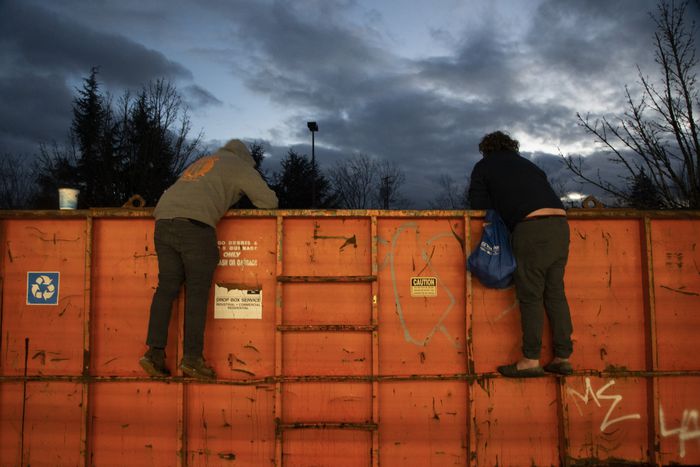 Activists and residents in Northeast Portland faced off against police on Tuesday over a mountain of discarded food left in the dumpsters of a local grocery store. Rocked by a days-long ice storm that left up to 300,000 people without power, the Fred Meyer grocery store in Portland’s West Hollywood neighborhood threw out hundreds of pounds of perishable foods that had been in their cold storage during the 4 hours it was without power. Locals quickly noticed  the discarded bounty, and word spread on social media. By late afternoon, a small group was on the scene to salvage what they could for themselves or to share with those in need through mutual aid groups.

go snag some free food if you can get to the Hollywood Fred Meyer in Portland yall pic.twitter.com/Fv86mvNWrB

In response, the store’s management called the Portland Police Department (PPD), which dispatched 11 officers with the specific task of ensuring the discarded food remained in the dumpsters, consciously leaving the food to spoil rather than be collected or consumed. Armed PPD officers squared off with the activists, threatening them with charges of trespassing, for several hours, in a near-perfect illustration of the “poverty in the midst of plenty” Marx described in Capital.

When I arrived on at the Hollywood @Fred_Meyer in Portland this evening, I was greeted by 12 @PortlandPolice officers who were apparently guarding two dumpsters full of food that mutual aid orgs were trying to distribute and hungry folks were trying to eat
1/ pic.twitter.com/xyTIcTBMeI

This situation throws into sharp relief how corporate profit goes hand-in-hand with state violence. Residents of Portland have been pointing out on social media how difficult it is to get police to respond to 911 calls, while the supposed “crime” of salvaging discarded food can command an immediate response of three police cars and a dozen officers. The contrast is telling: clearly, the police’s  primary duty is to protect property and profits, not people. For those who still don’t feel the full force of the phrase “All Cops Are Bastards,” this is a succinct reminder that, even while some individual cops may be “better” or “nicer” than others, all cops are complicit in the daily and violent maintenance of class oppression.

The cruelty and absurdity of this use of police power created an immediate online outrage, and, in response, the company issued an apology via Twitter. In doing so, though, they only further highlighted how they prioritize profit over human life. Saying that they regretted the “confusion” that led to the police being summoned, they cynically claimed to have acted to protect people from potential food-borne illnesses. This, despite the fact that the power was out for less than four hours, that the food spent hours in freezing mid-winter conditions outdoors, and that much of it was still frozen when locals began collecting it. What Fred Meyer fears is not food-borne illness, or even the legal risk of being sued over food-borne illness. Quite simply, their actions are a mere defense of private property and a perfect example of the fact that under capitalism commodities exist not for their usefulness to people, but exclusively for their ability to be sold. Indeed, corporations like Fred Meyer routinely let huge quantities of food go to waste, even as millions of people struggle with food insecurity across the country. It is no logical leap for them to continue doing so even amidst a crushing winter storm, in the depths of a pandemic and a pandemic-induced recession.

Fred Meyer also sought to sooth the internet’s ire by pointing out how much they do donate to food banks, but failed to mention that Oregon’s food banks are stretched beyond capacity, while the stock price of their parent company, Kroger, is up an astonishing 33% from last year. Whereas, before Covid, an estimated 890,000 people relied on food banks in Oregon, that number now stands at just under 1.5 million. This does not even count the millions of families who count on the public school system to lighten the financial load of feeding their children through a three-times weekly meal delivery, which experienced significant disruption in the recent storm. According to Oregon Foodbank CEO Susannah Morgan, Oregon is experiencing the worst rate of hunger it’s seen in a century, with nearly one in four Oregonians facing food insecurity. Amidst this acute and widespread food insecurity crisis, a corporation such as Fred Meyer can still be counted on to act only to enhance or protect their profits. If donating their unsellable food can be done without cost, they will do so; but, they will defend against the non-market distribution of their products at any cost, even going so far as to destroy their own goods.

Not all online reactions have been negative. Many have spoken in defense of the corporation and the police in this situation, arguing that, if the laws surrounding food safety and charitable donations are too strict or bureaucratic, those should be reformed, but it is neither the corporation’s fault for following them, or the police for enforcing them.

But, far from making their actions understandable or forgivable, this points to the necessity of overturning not just bad laws, but the entire system which creates such situations of enforced scarcity. What made the store manager and the PPD officers behave in such an apparently illogical way? What did those officers imagine themselves to be protecting? Not simply a pile of sausages and cheese, certainly. Instead, they were consciously defending the very logic of class and property. Even when there is material abundance, capitalism enables, and in fact demands, the maintenance of scarcity — a scarcity defended by nothing less than the violence of the police.