Left Voice is part of an international network of revolutionary online newspapers. Here are some readings to introduce you to the Trotskyist Fraction – Fourth International. 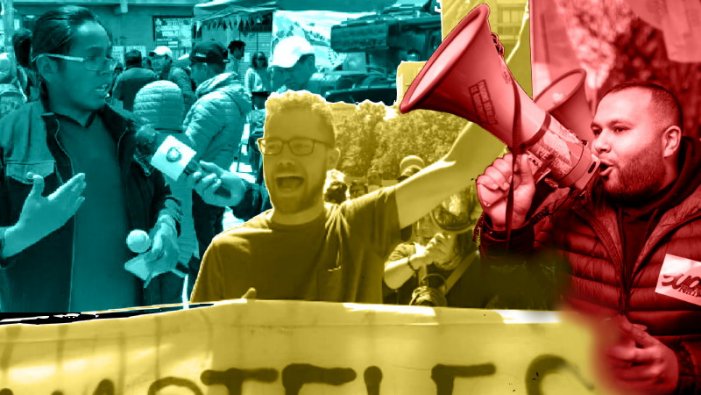 The Trotskyist Fraction — Fourth International (FT-CI, based on its initials in Spanish) is a revolutionary tendency that is present in 14 countries. The FT-CI publishes the international network of revolutionary online newspapers of which Left Voice is a part.

We have written some articles giving an overview of the Trotskyist Fraction. This reading list is intended to help English-speaking socialists who would like to learn more about the tendency, its historical background, and its theoretical underpinnings.

General elaborations about revolutionary strategy in the 21st century.

At the Limits of the “Bourgeois Restoration,” by Emilio Albamonte and Matías Maiello

On the Relevance of the Legacy of Leon Trotsky and the Fourth International (first published in Estrategia Internacional (International Strategy) No. 27, March 2011.)

This book was published in Spanish in 2018 and in Portuguese in 2019. This book summarizes a lot of the theoretical work of the Trotskyist Fraction from the last 20 years. An English translation is in progress. An excerpt of the introduction can be found here.

Historical texts about the break from Moreno

The Trotskyist Fraction emerged from the International Workers League (LIT) of Nahuel Moreno in 1988. Texts from the early 1990s draw a political balance sheet of that tendency. Polemic with the LIT and the Theoretical Legacy of Nahuel Moreno (1994) is available in English. La estrategia soviética en lucha por la República obrera (1995) has not been translated to English but is summarized in Soviet Strategy: A Primer in Left Voice Magazine #5.

The Party of Socialist Workers (PTS)

The PTS is the largest section of the Trotskyist Fraction.

The Rise of the Revolutionary Left in Argentina, by Juan Cruz Ferre and Marisela Trevin

Which Way Forward for the Trotskyist Left, by Fernando Scolnik and Matías Maiello

The Partido Obrero (PO, Workers Party) of Argentina is experiencing a major crisis. In this article, two leading members of the PTS, which is part of the Workers Left Front (FIT) alongside the PO, take a look at the crisis of the PO to begin a discussion about which strategy is needed to build revolutionary parties today.

A Brief History of the Workers Left Front, by Octavio Crivaro and Matías Maiello

Bread and Roses: Gender and Class Under Capitalism, by Andrea D’Atri

This book has been published in Spanish, Portuguese, Italian, French, and German. An English translation will be published by Pluto Press in early 2021.

Feminism for the 99%—A Debate About Strategy, by Andrea D’Atri and Celeste Murrillo

At the beginning of 2018, U.S. based activists and intellectuals* called for the construction of a “feminism for the 99%.” This idea, inspired by the Occupy Wall Street movement of 2011, gave shape to the manifesto signed by Nancy Fraser, Cinzia Arruzza, and Tithi Bhattacharya, which appeared on March 8 of this year. We publish some reflections on the new wave of feminism and the anti-capitalist perspective proposed by its authors.

Women’s Emancipation in Times of Global Crisis, by Laura Lif and Andrea D’Atri

The crisis of global capitalism reminds us that the rights oppressed people have obtained are not set in stone, but are subject to cuts imposed by bourgeois governments and international financial institutions. Our rights are subject to the ups and downs of power relations in global capitalism. The economic crisis deepens social polarization, reviving the most reactionary sectors of society to express their virulent xenophobia, homophobia, and misogyny. Knowing this, how can we fight for women’s liberation?

What Kind of Party?

Debates about Syriza in Greece

SYRIZA and the Position of Revolutionaries, by Philippe Alcoy

Revolutionaries and the Question of the “Government of the Left,” by Claudia Cinatti

Syriza and Podemos: A Necessary Balance Sheet, by Diego Lotito and Josefina Martinez

Chile and the New Cycle of Class Struggle in Latin America

Revolt and Revolution in the 21st Century

From Fragmentation to Hegemony: Turning Points in Class Struggle Today

Revolutionary Theory and Practice after the “End of Ideology”

The Struggle Against the Pandemic

Pandemic and Capitalism: The Two-Pronged Struggle of the Working Class, by Matías Maiello

On the Front Line to Make the Capitalists Pay for the Pandemic and its Brutal Consequences, statement by the FT-CI

Coronavirus and the Healthcare Crisis: Our Lives Are Worth More than Their Profits!, statement by the FT-CI