On Monday, March 30, Chris Smalls helped organize and lead 50 workers in a walkout at the Amazon warehouse in Staten Island, New York. Workers took action because the company is failing to protect them. One of their coworkers tested positive for the coronavirus the week before; the company claims this is the only case, […] 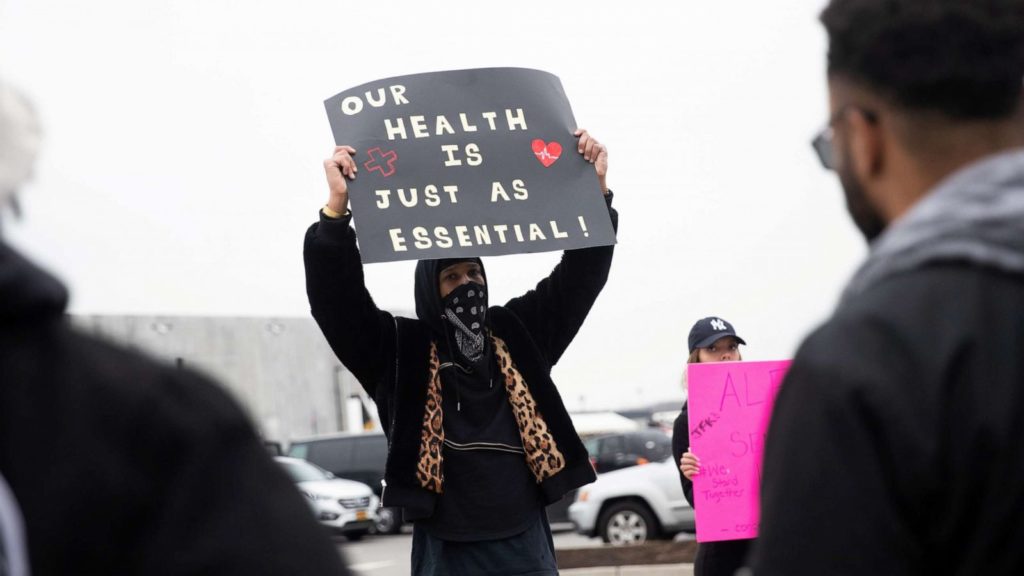 On Monday, March 30, Chris Smalls helped organize and lead 50 workers in a walkout at the Amazon warehouse in Staten Island, New York. Workers took action because the company is failing to protect them. One of their coworkers tested positive for the coronavirus the week before; the company claims this is the only case, but workers say there have been at least 10 and that management has failed to notify them or properly clean the warehouse. They aren’t being given PPE and there isn’t social distancing inside the warehouse.

Voices from the Amazon Strike: Today in Staten Island, Amazon workers walked out demanding the shut down of the warehouse.

Left Voice spoke to Chris Smalls at the walkout yesterday.

The walkout organized by Smalls garnered a great deal of media attention. The Amazon warehouse joined workers mobilizing for protections all over the country, like those at Whole Foods, as well as Pittsburgh garbage workers and others.

Later on Monday, the company fired Smalls for “violating social distancing guidelines and refusing to remain quarantined …” It’s a particularly striking indictment of how capitalism truly functions when a worker is fired for the very thing he’s fighting against. There is no limit to the bosses’ contempt for the rest of us.

Workers in the logistics sector — from Amazon to Instacart — are under assault not only from COVID-19 but also from companies that put profits before human needs. These workers are serving a vital role as many people cope with the pandemic by staying at home. Healthcare workers are only part of the “front line” against the outbreak. Logistics workers are another part. They’re delivering vitally needed food and other items to homes around the country.

Their companies are putting them at unique risk. These workers cannot work from home. Most of them are either gig workers or paid very low wages. Missing work means not being able to sustain themselves. They work in crowded fulfillment centers with thousands of others. Critically important protective supplies such as hand sanitizers and disinfectant wipes are rationed or unavailable. As the Verge recently reported, “Workers at 19 warehouses have tested positive for COVID-19, according to local news reports. So far, Amazon has closed facilities only when forced to do so by government order or worker protest.”

Chris Smalls and all other workers fired under similar circumstances must be rehired immediately. Firing Smalls is a warning to Amazon specifically, but it’s also a threat to all other sectors of workers: If they choose to fight, they’ll be fired.

But the rest of us won’t stand idly by either. Everyone who shops at Amazon should demand Amazon to #ReHireChrisSmalls. Unions and other sectors of workers must take up this demand as well.

But given the scale of the crisis, we need more.  We need these logistics workers to be able to continue working — as long as they are willing to, regardless of what the bosses say. And they need to be working safely: with protective gear, with social distancing, with hazard pay.

Already, the bosses have shown that they can’t guarantee even the most basic safety measures for workers. So, workers need to take our safety in our own hands: take the warehouses from Amazon, and the grocery stores from the big companies, and put workers in charge of everything — not just the work itself, but also emergency measures to ensure health and safety of workers and customers alike. If that means shutting down a warehouse to give it a thorough cleaning before reopening under workers’ control with new safety protocols, so be it. No doubt, the great majority of people will gladly wait a few extra days for shipments if it means other human beings will be safe.

Meanwhile, whether Amazon workers have been fired, laid off, or are still working, their wages must be paid in full. In fact, they must be given immediate wage increases as hazard pay. And those who decide to stay home must be paid in full, too. There’s plenty of money in Jeff Bezos’s personal bank account to cover that!

As Chris Smalls said when speaking to Left Voice yesterday, “Stand up. Don’t be afraid. We the power. This building cannot work without us.” In fact, nothing can work without us, the working class.

Worker’s voices from the Amazon walk out