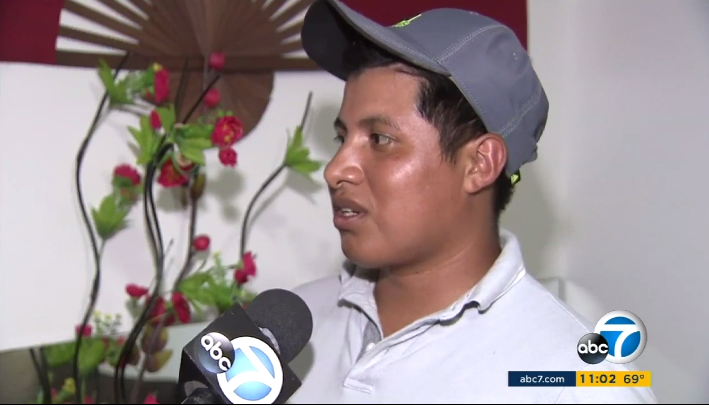 On Monday, July 24, street vendor Benjamín Ramírez was on a quiet corner in Los Angeles selling elotes, a delicious and popular street food. People literally line up to eat the corn on the cob with chili powder, cheese and mayonnaise made fresh. For so many of the eloteros. who are often immigrants from Latin America, police harassment and more recently racist attacks are a daily occurrence.

That day, Ramírez was assaulted and his elote cart toppled by racist, Carlos Hakas. Hakas had been harassing Benjamín for weeks, so the vendor decided to film the encounter. The video shows Hakas and Ramírez having a heated exchange in Spanish. Hakas is shown advancing toward the cart, threatening Ramírez with a stun gun. Hakas claimed that the elote cart was “in his way,” as he and his wife, Holly Covelle were walking their dog, but he obviously had the option of walking around it. When the vendor refused to move his cart and accused Hakas of racism, Hakas proceeded to hurl ableist insults at the vendor: “I’m not racist, I’m Argentinian, you retard.” Ramírez responded by spraying Hakas with chili powder, and Hakas abruptly overturned the truck.

The incident has since gone viral and Los Angeles has rallied around the elotero worker and exposed Carlos Hakas.

Hakas, an Argentinian native, makes his living as a musician and is a member of musicians’ union Local 47. Since the incident, Local 47 has been [forced to address his racist behavior . Many other news stations and articles have covered the story .

Left Voice stands with immigrants from all countries and wholly condemns the actions of Carlos Hakas and other bigoted bullies like him. We work in conjunction with the international news network Mexico .

For us, the working class has no borders. We side with oppressed people, such as Benjamín Ramírez and wholly condemn racist bullies like Carlos Hakas, who believe they can get away with such attacks. Many people, including some immigrants, buy into the racist, xenophobic beliefs, in order to gain a leg up in the “pecking order,” or elevate their status by aligning with white supremacy, rather than standing against racism and in solidarity with oppressed people.

This event, while only occurring between two people, is an everyday experience for immigrant street vendors and working class immigrants. It is emblematic of the escalation in hate crimes against Blacks, immigrants, transgender and Muslim people. It is undoubtedly linked to the government’s open war against undocumented people, with the number of arrests in 2017 already upwards of 37 percent higher than last year .

People like Hakas, who side with white supremacy and act as enemies of the working class have nothing in common with combative working class in Argentina and around the world.

Because Ramírez is a Mexican immigrant, it is likely that Carlos Hakas thought he could get away with his attack. He was wrong. Since then, thousands of dollars have been raised to support the vendor and several hundreds attended a rally on Thursday, July 27 in Los Angeles to support all street vendors and to condemn the harassment by bigots and police. Left Voice was there with thousands of other supporters. Bigotry will not be tolerated in LA. We protect our eloteros!

Our diverse editorial staff of Asian, Black, white, Mexican, and Argentinian workers and activists defend food vendors and the working class against bullying behavior. Not only do we side with Ramírez, but we hope to try his delicious elotes con más sabor because it is made with love by vendors and support of the Los Angeles working class.