Since April 3 massive mobilizations have been taking place in Haiti, in different points of the country, against the increase in the prices of basic foods. 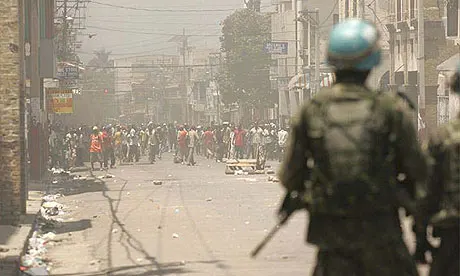 UN blue helmets of Cristina, Lula and Tabaré, out!

Stop the repression against the Haitian people!

Spontaneous mobilizations that had begun in the southern city of Les
Cayes were brutally repressed by the National Police and the blue
helmets, troops of the Stabilization Mission in Haiti (MINUSTAH). The Prime Minister’s communiqué, that blamed the disturbances on gangs of narcotics traffickers, only inflamed the spirits of poor people and spread the demonstrations through the main cities of the country. Thus, on April 4, in Cayes Gonaives, Jeremie, Petit Goave and Port au Prince, the capital, the population not only rose up against hunger, but also demanded the resignation of President Preval and withdrawal of the UN troops. The “hunger crisis” caused the resignation of the Prime Minister through parliament. From the side of the poor and
working people, the toll is 5 deaths and dozens of wounded, some of
them with extremely grave wounds.

We socialist revolutionaries declare our most energetic repudiation of
the repression by the blue helmets, made up of Latin American troops,
from Argentina, Chile, Brazil, Uruguay and Bolivia. The “Uruguay
Battalion” has been singled out by several human rights organizations
as the main leader of this repression. At the same time, together with
all the democratic and anti-imperialist forces of the continent, we
call for solidarity with the struggle of the people of Haiti, who have
been suffering and are the victims of the cruel plunder and oppression
by the IMF, the transnational corporations, the governments, each in
its turn, all of them supported by the UN occupation force.

We denounce the hypocritical speech of Cristina Kirchner, Lula, Tabaré
and Evo, who justify the presence of Latin American troops on Haitian
soil to bring “democracy, development and stability” to our sister
nation. The MINUSTAH troops have brought only repression, sexual abuse
of women and girls in the poorest neighborhoods, and corruption. They
act like a real occupation force serving the interests of the Haitian
big bourgeoisie.

After days of silence and after a big demonstration headed for the
Presidential Palace to demand the resignation of President Preval, he
finally addressed the population in a speech. There he admitted that
the country’s situation is: “the result of twenty years of mistaken
policies.” The cynicism here has no comparison. As if Preval had
nothing to do with Haitian politics in recent years! René Preval, who
had himself called the “father of the poor” and is the leader of the
center-left movement Lavallas, is the one who administers the alliance
of bankers and transnationals that run assembly plants, and is the one
mainly responsible for the looting of Haiti in the last two years.

At press time, the MINUSTAH troops were imposing terror with their
tanks and weapons in the poorest towns of the land. It is now more
than obvious that Latin American solidarity cannot come from the hand
of Lula, Cristina, Evo or Tabaré. Real solidarity comes through us,
Latin American workers and campesinos mobilizing in support of the
people of Haiti to expel imperialism from the continent and overthrow
puppet governments like that of Preval, and the immediate withdrawal
of UN troops.