Revolution at the Ballot Box? Socialism and Elections

Is the Democratic Party a place for socialists to run for office? A look at the ideas of Karl Marx and the Communist International, with some modern examples of independent socialist campaigns. 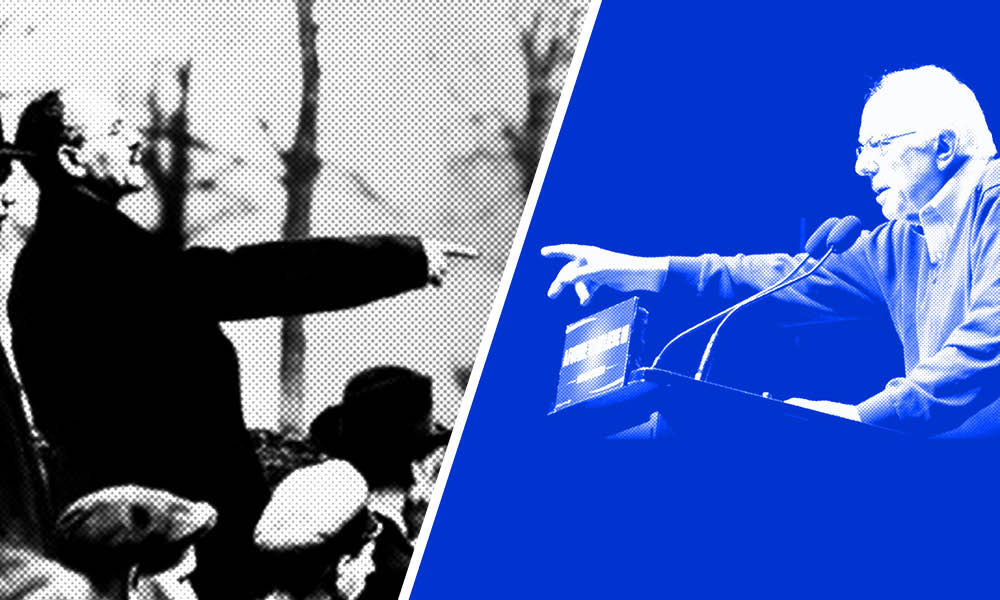 Since the early days of modern socialism, the movement has been concerned with how to use bourgeois elections in service of the working class. The starting point of socialist electoral strategy has been the need to forge class independence. Early revolutionary leaders such as Karl Marx and Friedrich Engels clearly understood that the working class movement would be easily constricted and coopted so long as it didn’t have a political vehicle of its own. As Marx wrote in the 1871 position piece “Resolution of the London Conference on Working Class Political Action”:

against this collective power of the propertied classes the working class cannot act, as a class, except by constituting itself into a political party, distinct from, and opposed to, all old parties formed by the propertied classes; That this constitution of the working class into a political party is indispensable in order to ensure the triumph of the social revolution and its ultimate end — the abolition of classes.

Marx identified the fundamental necessity of working-class political independence. Without an independent party of its own, the working class cannot shape a strategic vision contrary to the power of the capitalist class. The historical failure of the U.S. left to build such a vehicle has severely limited the strength and organization of our side.

What role can bourgeois elections play for such a party? How do elections fit into a socialist party’s overall strategy? Marx answers these questions as follows:

Even when there is no prospect whatever of their being elected, the workers must put up their own candidates in order to preserve their independence, to count their forces and to lay before the public their revolutionary attitude and party standpoint.

This short statement gets to the heart of a revolutionary approach to electoral work. Participation in bourgeois elections as a separate party actualizes the principle of political independence of the working class. The workers’ party asserts its opposition to the bourgeois parties concretely through its mass work, with elections as a part of its overall strategy. Furthermore, campaigning in elections allows the workers’ party to connect with a wider layer of working-class people.

A document written and adopted by the Communist International in 1922, “Communism, the Dictatorship of the Proletariat, and the Utilization of Bourgeois Parliaments,” otherwise known as the Theses on Parliamentarianism, provides a clear and concrete framework for approaching electoral work in the context of the revolutionary struggle for socialism.

The theses emphasize that “[t]he most important method of struggle of the proletariat against the bourgeoisie, i.e. against its state power, is above all mass action.” Demonstrations, strikes, riots, and other forms of struggle utilized by the organized working class are the fundamental force which drives social transformation, rather than the number of seats the socialist party (even a consistently revolutionary one) wins. The primary function of a party is to aid the organization of the masses in their workplaces and communities in order to intensify and focus the class struggle. Electoral work ought to be subordinate to that consideration at all times—it is just another tactic in the broader arsenal of an organization of struggle.

The theses then outline the role which socialists politicians can play in relation to the party and the class:

Revolutionary elected representatives consistently support struggles against oppression and exploitation at every turn, they promote revolutionary ideas and demands, and they expose the entirety of the system at both the structural and individual level. Consequently, a revolutionary politician does not engage in the sort of politicking that is the lifeblood of reformist and bourgeois parties alike. Fundamentally, a revolutionary politician seeks to destabilize and delegitimize the bourgeois parliamentary structure, while pointing to working class struggles as the locus of real power. As the Theses state,

Every communist member of parliament must bear in mind that he is not a legislator seeking an understanding with other legislators, but a Party agitator who has been sent into the enemy camp in order to carry out Party decisions there.

When political or economic crises hit, the role of the revolutionary politicians can be even more important. As the Theses state:

The Communist Party does not enter these [bourgeois parliamentary] institutions in order to carry out organic work there, but in order to help the masses from inside parliament to break up the state machine and parliament itself through action (for example the activity of Liebknecht in Germany, of the Bolsheviks in the Tsarist Duma, in the ‘Democratic Conference’, in Kerensky’s ‘Pre-Parliament’, in the ‘Constituent Assembly’ and in the town Dumas, and finally the activity of the Bulgarian Communists).”

Note how alien this strategy is to the one practiced within the Democratic Party today.

While the supporters of the ballot-line strategy have argued that communists neglect the role of parliamentary struggle in favor of an anachronistic model of “insurrection,” the Theses on Parliamentarianism and the whole policy of the early Communist International contradict the assertion. Communists have always recognized that electoral work can act as an important component of the struggle for socialism. In fact, one of the key debates at the Comintern’s Fourth Congress revolved around the hypothesis that a worker’s government, based on a parliamentary majority, could serve as a starting point for the seizure of power by the working class.

Thus, the debate is not one between electoralism and insurrectionism. It is between those who believe that the capitalists’ state machinery can be transformed from within vs. those who believe the state must be smashed and a workers’ state built in its place. While reformists aim to place the bourgeois state under workers’ control, communists participate in bourgeois institutions to delegitimize and destroy them.

Clearly, the Left cannot implement the electoral theses of the early Communist movement word-for-word. Both conditions and the organization of the Left have changed. The Theses on Parliamentarism were written to instruct Communist Parties, many of which already had a significant mass base, how to utilize bourgeois elections in the context of imminent revolutionary upheavals. In contrast, we on the U.S. left do not even have a mass reformist organization, let alone a mass communist one. Thus, our implementation of a communist approach to electoral work must be adapted to the capacities and needs of our movement today.

In the United States, our preeminent task is to forge a party which can both represent the interests of the working class today and prepare the final struggle which topples capitalism. As long as the Left is tied to the Democratic Party, even to its progressive elements, we will lack an organization which can help to revolutionize our society. While our main orientation has to be towards the struggle of our class in the workplaces and within social movements, pursuing a complementary electoral strategy can speed up the process of revolutionary left recomposition and give us a much-needed voice in the overall radicalization. We should look to contemporary implementations of these strategies, such as the Workers Left Front (FIT) in Argentina as well as the few examples today which are closer to home. The FIT, an electoral alliance between four Trotskyist organizations, has demonstrated that revolutionaries can develop a mass working class base through electoral work. In the recent Argentine elections, the FIT used their national platform to popularize a plethora of demands with the aim of forging a workers’ government through “struggle and organization.” The FIT has used the bourgeois electoral system to complement their aim of overthrowing that very system.

Ellie Hamrick’s campaign for city council in Athens, Ohio has provided a glimpse of revolutionary electoral work in the U.S.. Her campaign, sponsored by the Athens Revolutionary Socialists, openly attacked the landlords and the capitalists who run the poorest county in Ohio, notably through her program “Operation Slumlord Smackdown.” She has called for the complete defunding of the police and the redistribution of wealth from the rich towards social services. Finally, she has given a platform not just for a robust set of revolutionary positions, but she consistently emphasized the fundamental role of the working class in bringing about the transformation of society. She correctly argues that even the best electoral representatives cannot transform the capitalist system; rather, her campaign is only as useful as the degree to which it furthers the consciousness and organization of working people. Running electoral campaigns like these can contribute to building the organization we need to advance the struggle of the U.S. working class. Putting forward our own candidates can give us a wider audience for revolutionary politics, can train our members as organizers, and can give us a platform to denounce the establishment.

While we are still far away from constructing the kind of organizations we need to channel working-class struggle towards the overthrow of U.S. capitalism, there are huge opportunities for us to begin this process. As we continue to build up our organizations, put forward our ideas, and intervene in the class struggle, we must also reject reformist strategies like the ballot-line and the dirty break, which will only lead us to a dead-end. Resurrecting a communist approach to electoral work, while difficult, will prepare us for the tasks we face in a period of increasing working class struggle, mass mobilization,and ruling class political crisis.

Coco is an organizer with Central Ohio Revolutionary Socialists