Révolution Permanente in France: A Militant Newspaper on the Rise

This article is from the French website Arrêt sur images [Freeze Frame] about the important growth of Révolution Permanente in France, first in the heat of the Yellow Vests struggle and now in the movement against the pension reform. This militant newspaper, part of the international network La Izquierda Diario (of which Left Voice is a member), has already won the respect of activists and the vanguard in struggle. 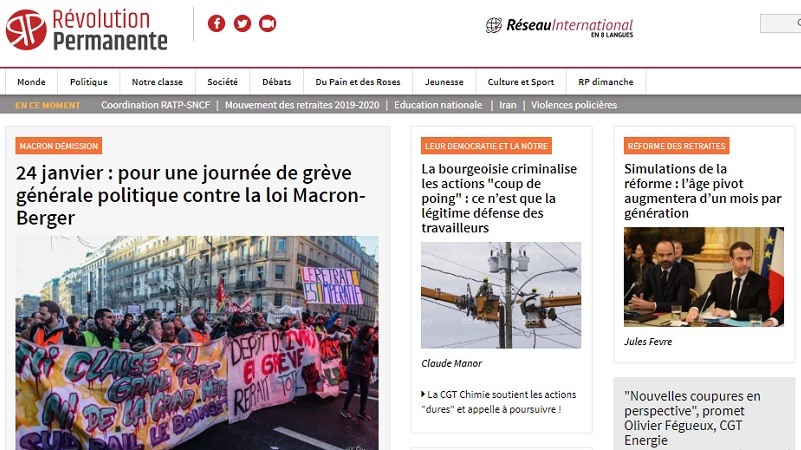 With journalists flocking to the picket lines, and before that to the marches of the Yellow Vests, one news site linked to the New Anticapitalist Party (NPA), Révolution Permanente, has earned a prominent position in the world of militant media.

The news site leans explicitly to the extreme Left, and is run by one of the currents within the NPA. It is widely read by the Yellow Vests, despite their great distrust of all political parties. This is the paradox of Révolution Permanente, a site created in 2015 by the Revolutionary Communist Current within the NPA (which is part of the “Trotskyist Fraction–Fourth International”). With a major presence on social media, including short videos and live feeds, this militant news site also publishes many news articles on current events and analyses of the movements in struggle. It also publishes articles from “friendly” anti-capitalist media, such as those from the La Izquierda Diario network in Latin America.

The Strikers Can No Longer Do Without Révolution Permanente

While the site’s journalists and editors work on a completely voluntary basis, the site differs from others linked to political parties by a strong inclination toward on-the-spot reporting and by its professional style and focus on social struggles—which differentiates it from the official NPA news site. “We want to be a real newspaper, not just a party site,” Flora Carpentier, a member of the Révolution Permanente editorial board, told Arrêt sur images (ASI).

After having covered the Yellow Vests intently, Révolution Permanente now deals extensively with the current movement against the pension reform. “We have an editorial committee of about 20 people,” Flora Carpentier explains. “Two or three people meet every day to spell out our line and choose the topics we’ll cover. Typically, that’s only Tuesday through Saturday, but in the current context it has become a daily occurrence.”

Members of the Revolutionary Communist Current, whether they are workers or students, write about the sites of struggle that directly concern them (a student would write about the occupation of their university, say, and a worker about the picket line at their employer), or would go elsewhere (a student, for example, might go interview striking workers). 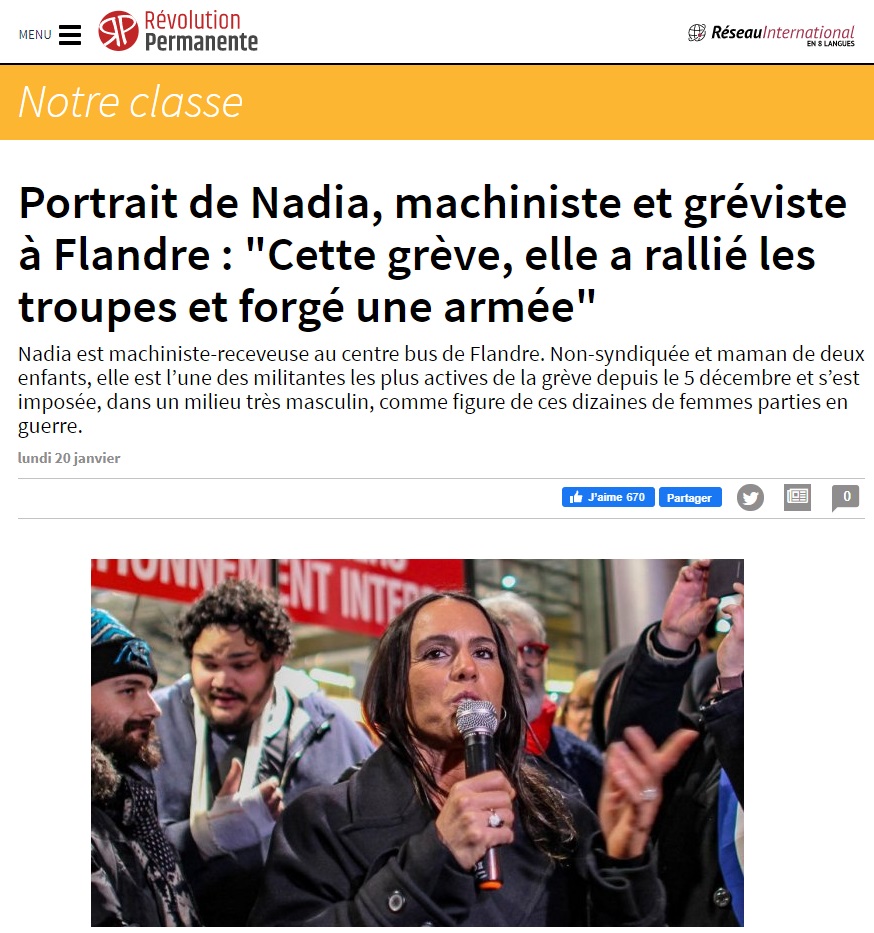 “The Révolution Permanente journalists are with us on the picket line every day, Mehdy—a CGT trade unionist from the RATP bus depot in Ivry-sur-Seine—told ASI. “They write well, they are reliable, and we need more like them.” The CGT militant, a leader of the movement at the Ivry depot, explained that he discovered the site during the movement against pension reform, and he can no longer do without it. “Thanks to Révolution Permanente, we can find out what’s going on at the other depots. Then we can pass information on to the General Assembly and let our colleagues know what’s happening elsewhere, to give them a boost.

At the Ivry depot, Révolution Permanente filmed the big melee that ensued when on December 9, 2019 police came to evict striking employees who were trying to block the depot.

The activist news website published a long report on January 8 about the daily picket line at the same depot. The article recounts the workers’ demands, of course, but it also discusses the links being created in the struggle, how the spirit of trade unionism is being conveyed between older and younger people, and about a striker—a former cook—simmering couscous as a way to attract as many people as possible to the picket line.

Before the current movement began, the news website wrote of the troubles faced by Ahmed Berrahal, an RATP machinist and CGT militant. As a member of the committee for health, safety, and working conditions, he had inspected buses leaving Belliard depot in the 18th arrondissement [district of Paris] and found that 70% of the vehicles did not meet safety standards. RATP management’s response to the inspection was to summon the employee and threaten him with dismissal.

“I had talked about my situation on Facebook,” Berrahal told Arrêt sur images. “Flora Carpentier saw it and called me about it. At the time, I didn’t know RP. But after they ran articles on my case and the state of the buses, the big media came [e.g., the France 3 and BFMTV TV channels, and L’Humanité and Ouest-France newspapers]. The first deputy mayor of Paris even had to react.”

The upshot was that while Ahmed Berrahal risked dismissal, he was suspended for only one day. “It was thanks to the media uproar caused by RP that the RATP could no longer punish me,” the trade unionist says. He’s become an unconditional fan of the website as a result. 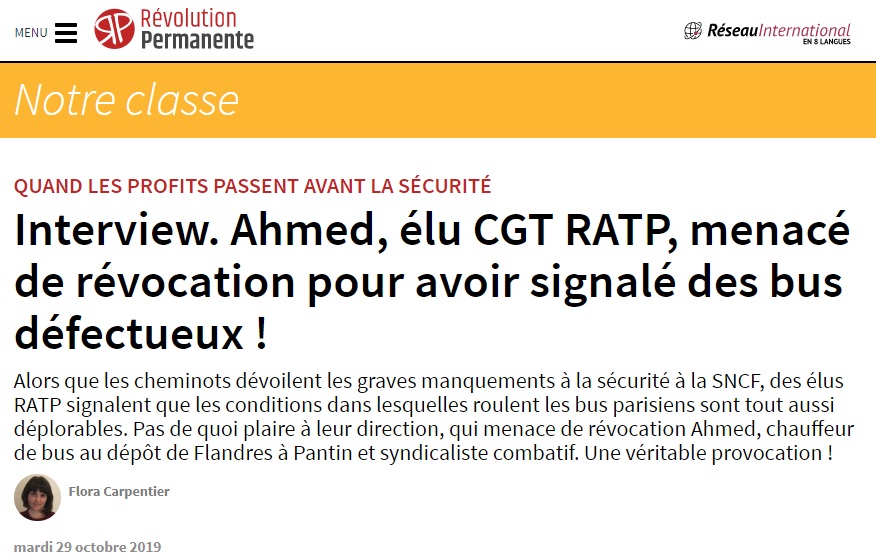 “The journalists from Revolution Pérmanente are on the picket line with us from 4 am, voluntarily. They are almost more motivated than us,” Berrahal continued. “They were also the ones who advised us to set up a strike fund for our depot, assuring us they’d spread the word. Since then, we’ve collected 50,000 euros!”

For Berrahal, RP is a new tool that provides information quickly about the entire struggle. “In previous social movements, we didn’t really know what was happening elsewhere.”

The effectiveness of this tool, he says, can be measured by the aggravation it arouses in the management of RATP depots. “They can no longer bear to see RP people on the picket line every morning.”

While Révolution Permanente gladly gives a voice to rank-and-file trade unionists, it is not kind to their leaders. The site has harshly criticized Philippe Martinez, leader of the CGT, for his attitude towards the Yellow Vests. The CGT’s current policy of agreeing to sit at the negotiating table with the government was met with a scathing response.

“Activists don’t want negotiations, they just want the reform to be dropped,” says Carpentier. When striking militants took over the headquarters CFDT [another French trade union confederation] and the CGT leadership condemned the action, RP—from the pen of a CGT militant—responded by accusing the CGT leadership of going “in the direction of the government and the bosses.” In live broadcasts, interviews, and meetings organized by RP, the floor is given to rank-and-file trade unionists, not to the leadership.

“We wouldn’t be inviting Philippe Martinez, for example,” Carpentier says, “but if we did invite him, it would be to question his positions—so I don’t think he’d accept!”

Before the current movement erupted, the Yellow Vests were another high-profile moment for Révolution Permanente.

In January 2019, the site had 2 million unique visits, surpassing Paris-lutte.info and Lund matin, the biggest sites of France’s extreme Left. But that success was not a foregone conclusion: the Yellow Vests claim to be distrustful of all political parties. Being linked to one of them, even a revolutionary party, was not necessarily the way to start off on the right foot. But everyone does not necessarily know PR’s affiliation.

“For me, it was last December, while watching a live appearance by Anasse Kazib [recently profiled by ASI], that I learned he was a Trotskyist linked to the NPA,” said Jérôme Rodrigues, one of the Yellow Vest leaders regularly interviewed by Révolution Permanente.

As Flora Carpentier sees it, “The Yellow Vests understood that we were on the side of the oppressed. We go against the mainstream media, which has tried to stifle the movement.” Being seen this way doesn’t prevent the site from standing firm on its positions, which the Yellow Vests do not necessarily share. “We’re working to build a revolutionary party, and we own up to it. In the elections, we campaign for the NPA.”

Even once he found out, Rodrigues wasn’t bothered by Révolution Permanente’s affiliation. “When I’m given the floor, I take it.”

Without fear of being “coopted”?

“This movement is unshakeable,” laughs the man who lost an eye from a police flash ball in January 2019 during a Yellow Vests demonstration.

Révolution Permanente posts videos—of the marches, police violence, and interviews with demonstrators—on social networks from cities throughout France. “Videos on social networks are very popular, and we’re betting that they will lead people to our articles,” explains Carpentier. Révolution Permanente also draws inspiration from formats that were a success during the Yellow Vests movement. “Presenting Yellow Vest personalities live is an idea we’ve taken up for the current strike movement.” This has included live streams by Anasse Kazib, the charismatic NPA militant from the left-wing trade union SUD Rail.

The Error on Tolbiac, and Correcting the Salpêtrière Story

Jérôme Rodrigues and other trade unionists interviewed by ASI praise Révolution Permanente for its reliability, which had taken a hit when RP published a rumor about a person being seriously injured when police evicted protesters occupying the University of Paris 1 center in Tolbiac. “Since then, we have been taking many more precautions,” says Flora Carpentier. “Like everyone, we’re not immune to mistakes, but when you see how BFM [a French TV news channel] covers the strike movement, for example, I’d say we’re a lot more reliable.”

The Pitié Salpêtrière Hospital episode is a case in point. Christophe Castaner [France’s Interior Minister] had claimed on May 1, 2019 that demonstrators had “attacked” the hospital. RP was one of the first to counter this false narrative, with videos of nurses in support. Meanwhile, mainstream radio and TV had been sucked in to the ministerial version.

First published on January 22 in French on Arrêt sur images.