Rush Limbaugh is the worst. 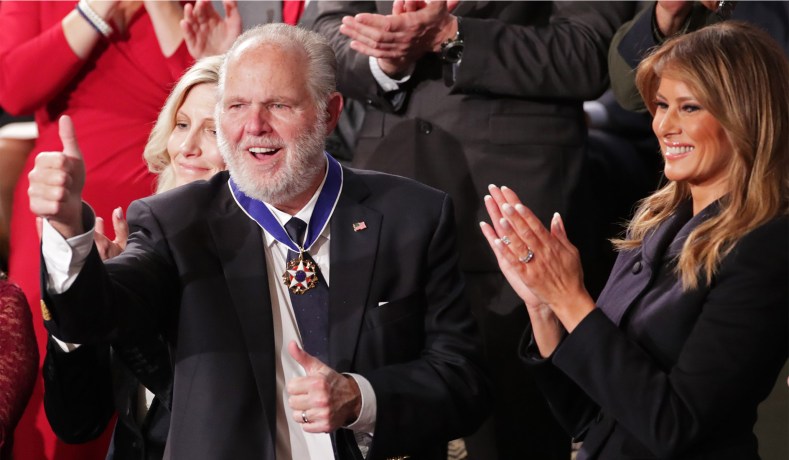 Donald Trump surprised many by awarding far-right talk-show host Rush Limbaugh the Presidential Medal of Freedom during the State of the Union on Tuesday night. Limbaugh helped create the current state of right-wing media through his popular talkshow, on which he has advocated for the most bigoted and reactionary form of conservativism since 1988. He has spoken out against women, people of color, LGBTQ+ people , and immigrants. It should be no surprise that Trump singled him out to honor him. Limbaugh’s “no holds barred” open bigotry radicalized many of the voters who would go on make up Trump’s radical right wing base. Below are some choice quotes from the man that Donald Trump chose to honor in an address the nation:

“They’re out there protesting what they actually wish would happen to them sometimes.”
— on women protesting sexual harassment

“What does it say about the college co-ed Susan Fluke [sic] who goes before a congressional committee and essentially says that she must be paid to have sex — what does that make her? It makes her a slut, right? It makes her a prostitute.”

“When a gay person turns his back on you, it is anything but an insult; it’s an invitation.”

“Let the unskilled jobs that take absolutely no knowledge whatsoever to do — let stupid and unskilled Mexicans do that work.”

“There are more American Indians alive today than there were when Columbus arrived or at any other time in history. Does this sound like a record of genocide?”