Sanders in Queens: A Working-Class Revolution… at the Ballot Box?

Senator Bernie Sanders held a giant rally in Queens where he got the endorsement of representative Alexandria Ocasio-Cortez. He made many progressive demands—but claimed that these can all be achieved by voting. Impressions from a reporter at their first Sanders rally. 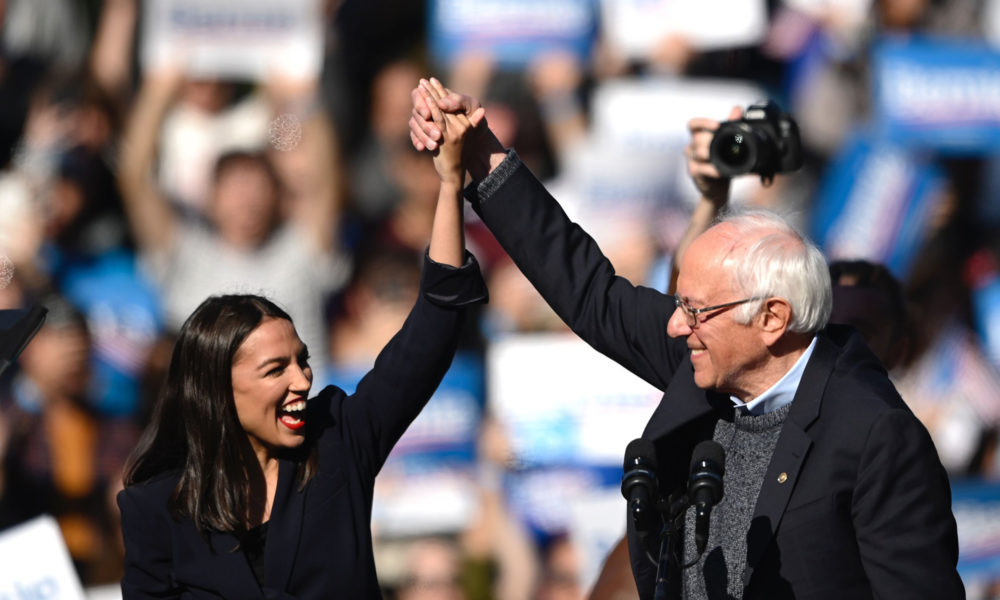 As I approached Queensbridge Park on Saturday morning, the line to get into the rally snaked for hundreds of yards. The sun was shining bright, but partially blocked by the Queensboro Bridge looming above. Bernie Sanders was holding his first campaign rally since his hospitalization for a heart attack two weeks earlier. He was getting the endorsement of representative Alexandria Ocasio-Cortez.

This was my first time seeing Bernie Sanders live. I have often heard it said that Sanders is inspiring a “movement” with a “class-struggle perspective.” I wanted to see for myself. There was certainly a large crowd gathered to watch him speak: The park was closed after 20,000 people had been let inside. More were standing outside the barriers to listen.

The crowd was similar to the one that Elizabeth Warren drew to Washington Square Park last month—both were somewhat younger and quite a bit whiter than the city itself.

I spent three hours listening to Sanders, AOC, Tiffany Caban, and other Democratic Party politicians. There was no lack of progressive demands: Medicare for All, the cancellation of student debt, or higher taxes on the rich. Sanders has evolved since 2016, and made clear that wealth inequality does not affect everyone equally: Black and Brown workers are far more exploited than white workers are.

However, in three hours there was not a single word about a movement of working people fighting for their own interests. Just to make sure, the rally’s organizers had prohibited all but the official signs from being taken inside. Socialists who wanted to organize around the Sanders campaign were forced to stand outside. People cheered at certain demands, but since there was nothing more for us to do, thousands of people left before the end.

Every once in a while, my ears perked up. Alexandria Ocasio-Cortez said: “We need a mass mobilization of working-class people.” But then she quickly added: “… at the ballot box!” And this kept happening! “We need a working-class revolution … at the polls!” These “democratic socialists” of the Democratic Party want to sound radical, but in the end, the only thing they encouraged these 20,000 New Yorkers to do was vote for a capitalist party.

It is such an exciting time to be a socialist. But this rally appeared to take place in a parallel universe where there are no politics outside of voting for progressives. There was no mention of the ongoing strikes at GM or in Chicago. There was no mention of the mass mobilizations that forced the government to retreat in Ecuador. No mention of the mass protests shaking Chile that very minute. Speakers did mention Trump’s racist and colonial treatment of Puerto Rico—but they avoided talk of the 12 days of protests that toppled a corrupt governor.

Sanders has been credited with popularizing socialism in the U.S., but he avoided the term entirely during his speech. The only reference to socialism came from director Michael Moore, who has a very strange definition of the concept. He said that Americans already do like socialism, because the fire department is socialist—anything funded by taxes, in Moore’s view, is socialist. He shares this misunderstanding with the not-very-liberal commentator Bill Maher, who refers to socialism as “capitalism plus.” Moore said that socialism is what the Democratic Party did 70 years ago. He failed to mention, of course, that this was also the Democratic Party of Jim Crow, internment of Japanese-Americans, and atom bombs.

Sanders and AOC want billionaires to “pay their fair share” in taxes. But how can capitalism be “fair”? If someone works for Jeff Bezos for an hour, they might generate 100 dollars in profits, but only receive 15 dollars in wages. The rest is taken by Bezos and Amazon shareholders. Does this exploitation suddenly become “fair” if those shareholders pay a few more dollars in taxes?

Unfortunately, Sanders and AOC have both made clear that they respect the private property of capitalists and have no plans to take it away from them. Therefore they have no plan to end the exploitation of wage labor, which forces working people to sell themselves to the highest bidder. That exploitation might be alleviated a bit through reforms like free health care and free education, but at the end of the day, that would just be a reformed version of capitalism, in which capitalists still control the vast majority of society’s wealth.

Socialism is not just the fire department or the post office. Socialism is a radically different kind of society in which the wealth created by the labor of all is controlled democratically, by everyone. This kind of society cannot be won at the ballot box, using the existing state apparatus. The state and all its institutions—including parliaments, courts, political parties, police and military—exist to protect the rule of capital. In other words, American “democracy” was always designed to protect the capitalists. That is precisely why we need a revolution; and that means more than just winning an election.

I did not leave the Sanders rally feeling inspired. It was good to hear thousands of people cheering for progressive demands. But there is no way that any of these demands are going to be implemented by voting for Democratic Party politicians. What does inspire me is the protests in Ecuador or Chile or Puerto Rico or Lebanon—they show how progressive change can be won.

The rally, if anything, showed the limits of this kind of democratic (party) socialism. The problem is not just that Sanders represents a non-movement. By attempting to corral young people into the despised and discredited Democratic Party, it is more of an anti-movement. And that is nothing to be excited about.