Last night protests continued in Minneapolis. While killer cops remain safe and comfortable in their homes, the national guard has been called to repress protesters. While the media demonizes the protesters as criminals and looters,it is clear that the real criminals are the killer cops and the National Guard protecting them. 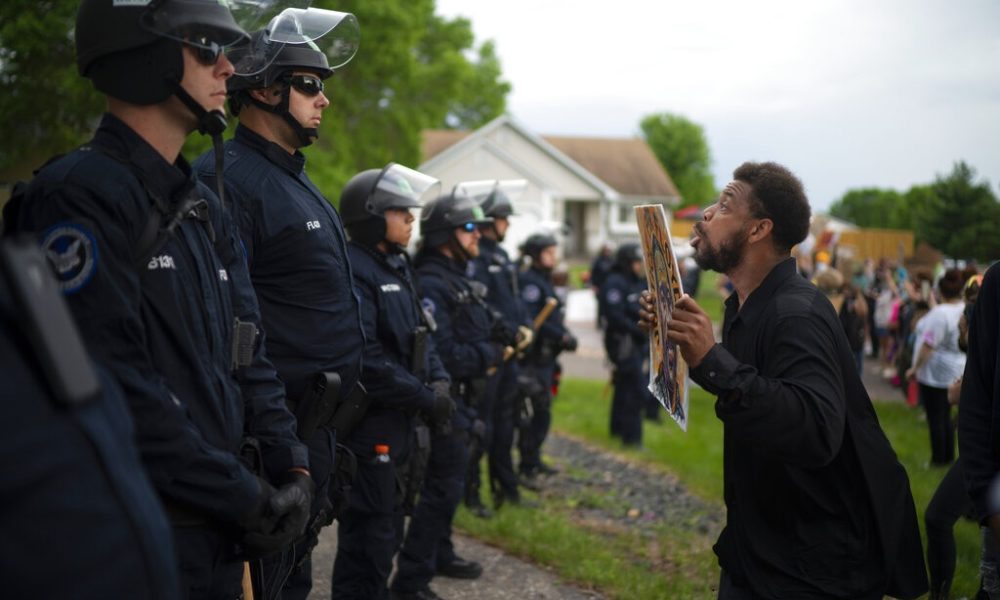 But the real looters and criminals aren’t the folks chanting Black Lives Matter in the streets last night.

The murder of George Floyd has gained national and international attention following the viral spreading of a video of his death. In the video, Floyd was brutally suffocated by a Minneapolis police officer who pressed his knee into Floyd’s neck for several minutes. Like Eric Garner, Floyd called out “I can’t breath” over and over again. Even as bystanders pleaded for the cops to stop, the officers continued to choke Floyd. After ten long minutes of torture, Floyd, a 40 year old bouncer, died at the hands of the Minneapolis Police Force.

The four police officers involved in the murder were fired, but none have been arrested, despite the overwhelming video evidence that they intentionally murdered Floyd. The Democratic Mayor of Minneapolis, Jacob Frey argued for the arrest of the officer whose knee was on Floyd’s neck— while ignoring that it was four cops who executed Floyd even if it was only one man’s physical knee. And Frey didn’t speak out about the continued police violence at the protest. And now, after this second night of protests, he is calling in the National Guard to repress the protesters. The hypocrisy is astounding: he calls for justice, but then calls in the National Guard to further terrorize the Black community.

The first night of the Minneaopolis protests brought thousands to the streets as they marched to the 3rd police precinct. They were tear gassed and shot with rubber bullets. There was a stark contrast between the actions of the police against Black Lives Matter protesters and the armed white protesters that raided the Michigan state capitol and yelled at cops. No tear gas or rubber bullets were thrown at them– after all they had the support of Trump and key sectors of capital, like the Wall Street Journal.

The day after the powerful protests in Minneapolis, a smaller group of protesters gathered outside Derek Chauvin’s house, writing “murderer” on his driveway. One person posted on facebook that food delivery workers refused to bring him food when they found out who he was. Now, the National Guard is stationed  outside the house of this killer cop. This is a stark reminder that the oppressive role of the state: rather than arrest a known murderer, the National Guard is protecting him.

In the meantime, Minneapolis has begun to build a wall around the 3rd police precinct made out of roadblocks and a chain link fence— correctly evaluating that there would be more protests. This too shows the priority of the state. Rather than simply arresting the men who killed Floyd, they instead chose to build barricades around the police station.

The city of Minneapolis is literally BUILDING AN ENTIRE WALL around the 3rd Police Precinct on Minnehaha Avenue. They are more concerned about protecting a building than they are with the sanctity of Black life. #JusticeForGeorgeFloyd pic.twitter.com/tNgl9xHtCB

But Minneapolis was not the only city to see protests last night. In Los Angeles, a march against police violence was called, with protesters taking the 101 freeway. A cop car forced its way through a crowd of protesters and accelerated while someone was on the car—injuring the protester. The murderous LAPD tweeted out “We hear your anger & your pain. We will always facilitate freedom of speech. Period. All we ask is that protests are held in a safe & legal manner.” Such concern means little when it comes from a police force known for its brutality against the black community and repressing mobilizations.

Protesters, most wearing masks, shut down the 101 Freeway tonight near downtown LA to protest the death of George Floyd in Minneapolis, who died after a police officer stood on his neck while detaining him pic.twitter.com/rgI36eXOys

In Minneapolis on the second night of protest, the police quickly escalated actions against protesters who were out in smaller numbers than the night before. Once again, the police donned riot gear and tear gassed protesters early in the evening. The police brought out the cavalry– a team of horses, to confront the protesters in an attempt to suppress the protests.

As the night wore on, the crowds grew to thousands expressing the rage of being oppressed by a murderous police force and at the complete injustice of the entire system and it’s brutality towards Black people. As the police rained tear gas on protesters, an Autozone was set on fire. Looters broke into several businesses, including a Target store in South Minneapolis, and armed white vigilantes, some of whom carried chainsaws, came out to supposedly “protect businesses from looting.”

As one might imagine, the right wing is having a field day with the images of Black people torching businesses and taking things from Target. Tucker Carlson argued on Fox News that “Ugly opinions, police brutality, rude entitled ladies in Central Park– all of that is bad, but none of that is nearly as bad as what you just saw….  Rioting is a form of tyranny. The strong and the violent oppress the weak and the unarmed. It is oppression. ”

Although Tucker Carlson is perhaps the most disgusting kind of ultra-right winger, what he said is indicative of an even broader way of thinking: endangering the private property of Target and Autozone is worse and “more oppressive” than murdering Black people.

And suddenly, in Carlson’s perverse universe, Black youth, systematically criminalized by the police and underemployed in the job market become “the strong and powerful” oppressors. Taking a lamp, or some clothes or even a TV from Target makes you a criminal— a looter that endangers democracy. It is the story the media will play and replay all day today.  And it’s the reason the national guard is being called in to repress protests before the killer cops were even jailed.

Taking a TV makes you a criminal. But being a massive corporation taking small business funds, or a massive corporation bailed out by the government— that’s business as usual. So, we should ask ourselves: who are the real looters? Target, which pays employees $11 an hour to make massive profits for their CEO, whose net worth is almost 57 million dollars? A select group of people 8 people who own half the world’s wealth and exhaust the world’s resources? If you watch the mainstream media, they will make sure that the narrative is that black youth who takes a 100 dollar TV from Target.

That’s why we need to recenter the blame squarely where it belongs: Derek Chauvin and the three cops with him are murderers who should be jailed. Their crime is on tape. But because they are cops, we need to mobilize for even this most basic demand.

Everything about this case highlights the complete injustice of the racist, capitalist system. The killing of George Floyd was already an egregious crime— one that is only exacerbated by every second that the killer cops are allowed to spend in the comfort of their homes instead of locked away in the same  prisons where countless people of color and poor people are incarcerated for much, much less. It highlights the way that private property is valued over Black lives — and in fact, as the coronavirus has demonstrated, working class lives.

In this moment, it is key to raise our voices in protest— to take the streets when we can, demanding the jailing of killer cops and an end to all police brutality. The examples of the unions who have made statements is also a key step in the right direction. But, we need more. We are in the midst of an uptick in class struggle and the Black Lives Matter movement can deepen, strengthen and radicalize such a movement. We need the unity of the working class and oppressed, taking up the demand that Black Lives Matter— against police violence, but also demands regarding the coronavirus crisis, which has disproportionately affected people of color.  This unity, the working class and oppressed, organizing strikes, pickets and marches is the social force that can crush this system.