Sixteen hundred South Korean workers are on strike against SK Broadband as part of a struggle against irregular jobs and low wages. They demand job security, safe workplace and living wages. 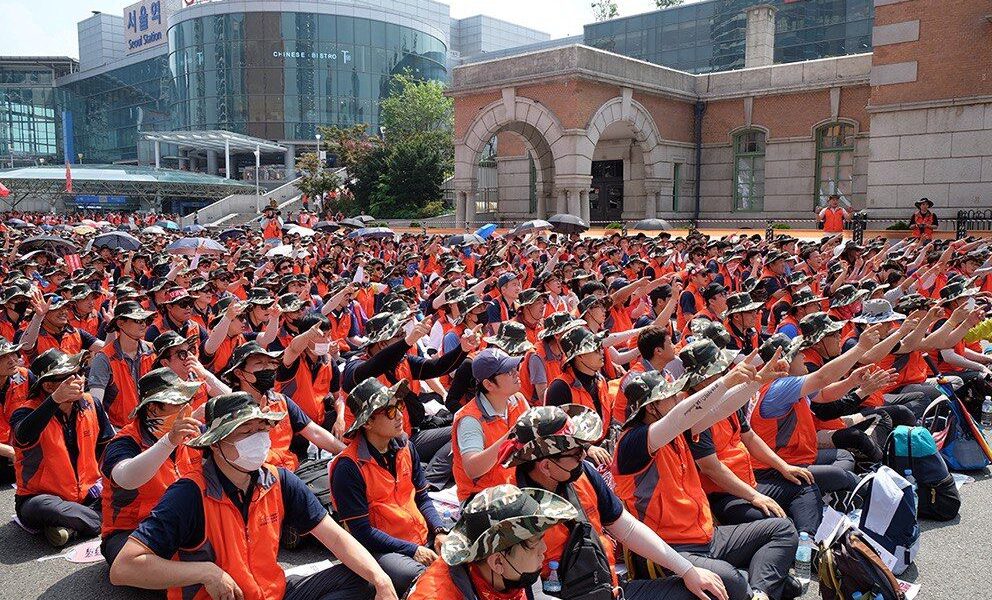 After a four-hour blitz strike on June 28 that took management by surprise, SK Broadband workers pulled off a 48-hour strike that ended June 30 with a 1,500-person-strong demonstration. They also set up an occupation tent in front of the company headquarters in Seoul.

Over a year ago, the telecommunications giant promised to convert the status of precarious employees. To that end, the company “regularized” them by making them the employees of a new subsidiary, Home & Service, in June 2017. But the workers saw no improvements in their wages or working conditions, so they decided to take action.

What is the status of the strike?

After successful strikes in June, we are continuing partial strikes this month. We have over 60 union locals all over the country, and the partial strikes are taking place every day at the unit or local level. Negotiations with the company have not yet resumed.

Why are you on strike?

As soon as President Moon Jae-in took office, his government promoted a “regularization policy” for the public sector, meaning that irregular workers would be made full employees. He visited Incheon Airport and declared the regularization of 10,000 workers there. Some capitalists in the private sector, such as SK Broadband, followed this policy to promote good relations with the government. SK’s CEO decided to regularize all 5,200 irregular (subcontracted) workers working in SK Broadband by establishing a subsidiary company.

We wanted direct employment by SK, so we had a bad feeling about their plan, but our union accepted it because many workers thought that job security would be guaranteed and assumed that the wage would increase to reach that of regular employees. As subcontracted workers, we make only about 35% of the current regular workers’ wage at SK Broadband. The company promised us that they would not cut our wages and that they would make serious efforts to improve our working conditions. 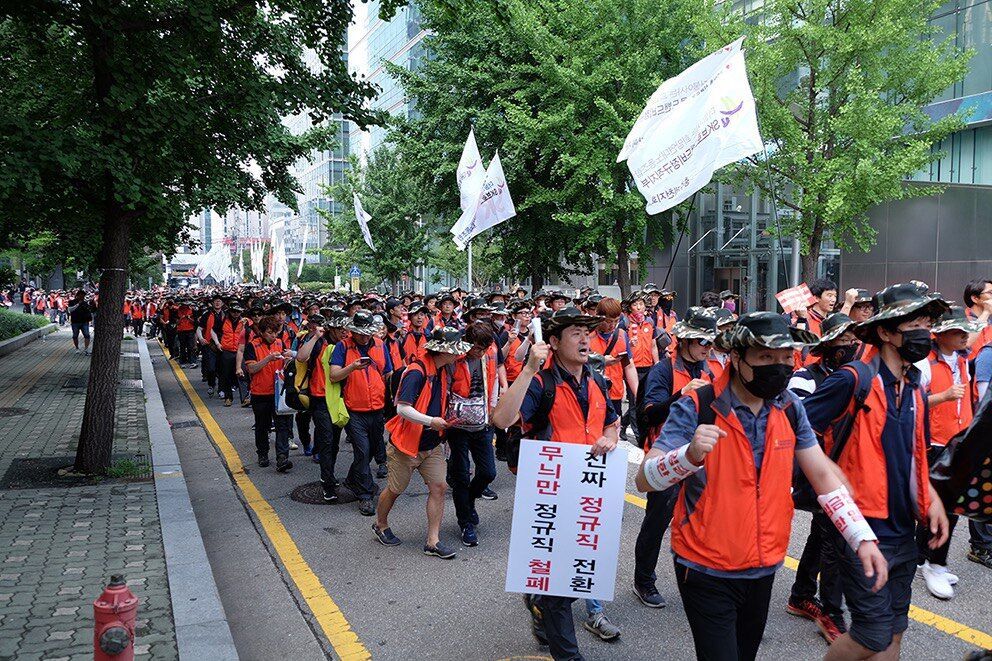 But it did not take long for the truth to be revealed. When they established a subsidiary company, they deliberately divided us, preventing some of our coworkers from five different centers from joining the new company. This division made the organizing more difficult for us. The company’s monitoring and control of our labor has become even worse. In some cases, wages fell to even lower levels.

Deaths by accident at the workplace are still common. In the process of negotiating with the company, they ignored us. They even told us to quit the company if we were unsatisfied with the wage. We could no longer negotiate with them. There was no option left but to fight them.

How much support did the strike have among the rank and file?

We did a survey of union members last winter. Almost eighty-five percent of them said they were still precarious workers, and more than 64% said nothing had improved.

The rank and file strongly supported the strike. Last month, we organized a poll among members of the SK Broadband Irregular Workers’ Union, and more than 97% of them participated in the vote. The result was an overwhelming 91% in favor of the strike.

Around 1,500 union members from all over the country gathered in Seoul for a rally on June 29. The workers felt energized by the actions and emboldened by the massive size of the strike. Since the last time we went on strike, in 2014, we had been unable to gather that many people, because that strike was really tough.

During six months, we faced repression, company lockouts, and detentions. The company hired thousands of scabs, and we didn’t have many resources. But this time, union members decided that they would not take it anymore. During the 48-hour strike on June 29, workers were emboldened, and they felt proud to see what they can do.

Since the units are scattered throughout the country, it’s not easy to maintain strike discipline. But union members still have a strong will to fight. Against the oppression of managers in the workplaces, our members are trying to organize more workers into the union during the strike, and many workers have recently joined the union. 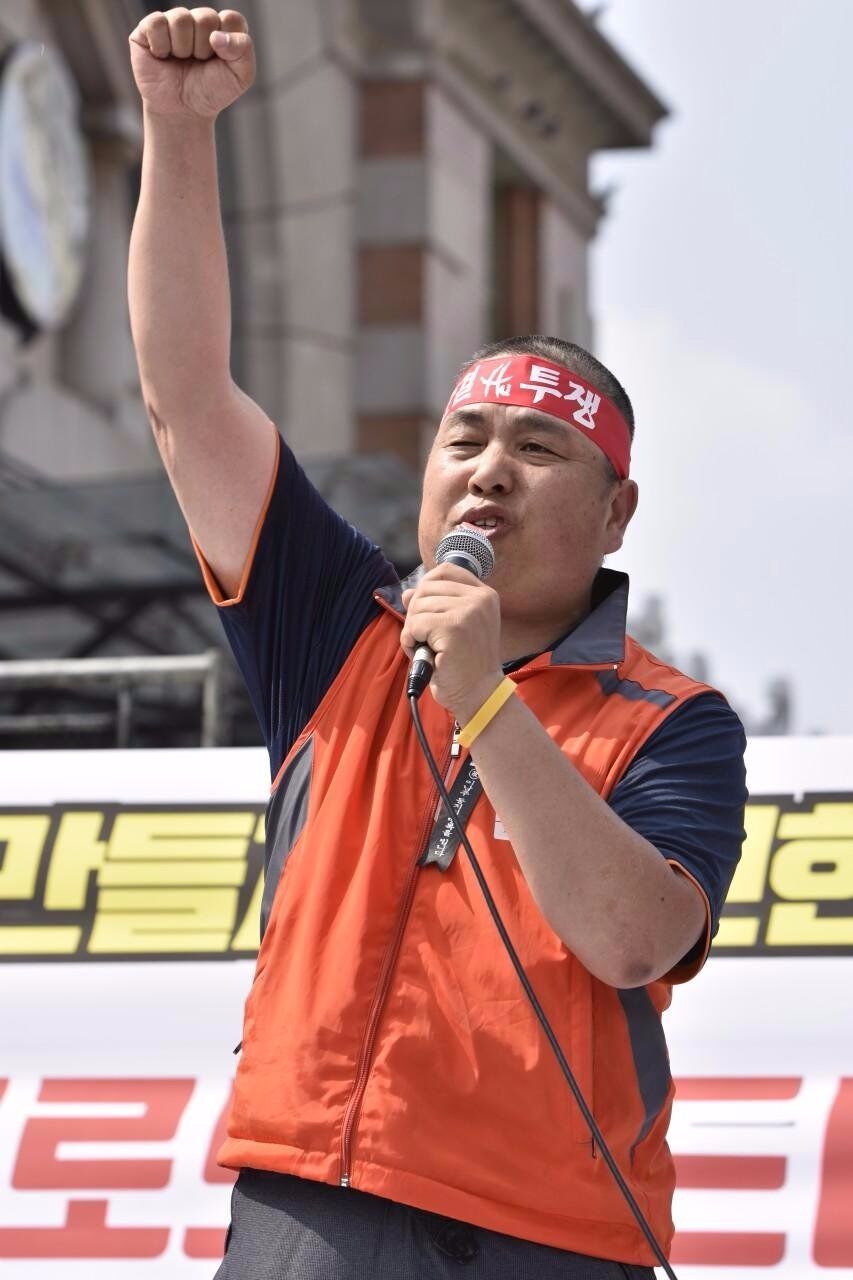 Beom-Chae Jeong speaking at a rally in Seoul.

Which unions are active in SK Broadband, and whom do they represent?

The SK Broadband Irregular Workers Union has 1,600 members. It was created during our strike in 2014. Our union represents combative workers in SK Broadband, expressed by our slogan, “Fighting workers are true workers!” It is affiliated with the Korean Confederation of Trade Unions (KCTU), which is the more combative of the two labor federations in Korea, and which represents about 800,000 workers nationally.

There is also a yellow union, which represents 761 workers. It was created by workers who left our union and opposed the struggle against the company. They often disparage us for our emphasis on fighting the bosses. But even among their members, 200 workers voted for the strike. So they unwillingly planned a strike (for two hours) to maintain their influence among their members.

There is another yellow union of permanent (regular) workers. They are not interested in the situation and the struggle of irregular workers.

How has the company responded to your demands?

They always say that the company is in a difficult financial situation. They rejected our grievances and accused us of making excessive demands. For example, when a fellow worker died while working, we demanded that the company take safety measures, such as “teamwork,” when we perform dangerous tasks. (We usually do the work alone.) But the company did not accept our demand and blamed the accident on “personal carelessness.”

They did not yield at all to our wage demand. They now call us “regular workers,” but we still earn only one-third of a regular worker’s wage at SK Broadband. They just wanted to improve the company’s image, not our lives.

We did win a small victory. Last year, the company did not allow all of us to join the subsidiary company. This was an obvious attempt to divide us. To maintain our unity, we fought their plan, and after the strikes in June, the management acceded, bringing our fellow workers into the same subsidiary company. This was a result of our struggle. Now all our union members are in the same company, and we can fight together under the same conditions.

But overall, the company is still stubborn. Lately, they have started using “substitute workers” (scabs) to break our strike. So in discussions with our fellow workers, we are trying to find a way to expel scabs from our worksites.

President Moon Jae-in pledged to end irregular jobs during his electoral campaign. Has he delivered on this?

This is not all. While the Moon Jae-in government declared that it respects labor, it pursued and supported restructuring at GM, which led to the closing of the Gunsan plant, leaving workers on the streets. Three workers have already committed suicide. So rather than becoming regular workers, irregular workers at GM factories are getting fired.

In addition, Moon also broke his promise to raise the minimum wage. The teachers’ union, meanwhile, has still not been officially recognized. So more and more workers are getting angry at the government’s deception. On June 30, there was an irregular workers’ rally, in which about 100,000 workers gathered in Seoul.

Where will the struggle at SK Broadband go from here?

Overall, our union has been stagnant for several years, and we are going to gradually strengthen our struggle. We know very well that the capitalists will not give up easily. But the will of our comrades is solid. Our union members do not intend to withdraw easily, and they know that the struggle will not end in just a month or two.

The government and the capitalists are deceiving us hand in hand, so we can’t trust the government. At the same time, we don’t believe that we can on our own. We need to fight together with workers from other companies who are now waging similar struggles, such as those at Samsung Service and LG Uplus.