Some ex-Trotskyist members of the New Anticapitalist Party in France are manuevering to split the organization now that they’ve lost their majority and militant rank-and-file members are pushing for a more revolutionary perspective. Our comrades in France reveal what’s really going on — in response to a leading French newspaper’s coverage of the story. 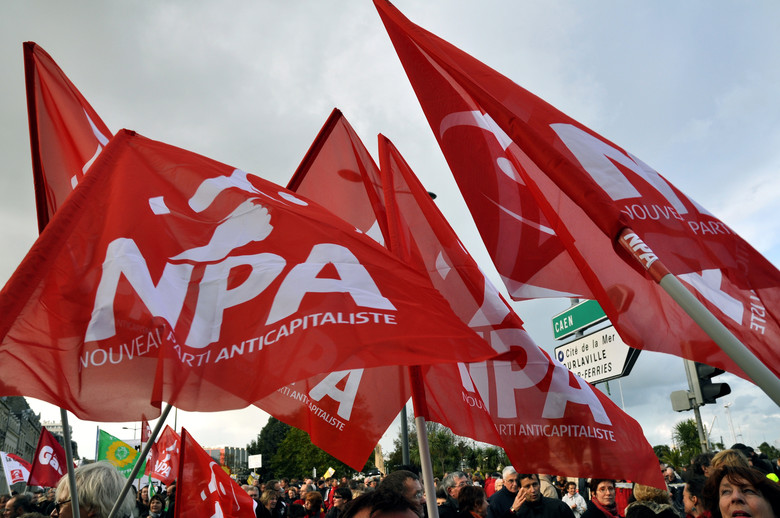 An article by Sylvia Zappi published on July 27 in Le Monde raises the threat of an “implosion” within the New Anticapitalist Party (NPA). It is a rather biased account of the causes and characteristics of the crisis, one that omits the decisive elements discussed here.

The article, based on an internal bulletin to which the author had access, explains that the high level of tension surrounding the NPA’s precongress debates is mainly the result of a “series of electoral and strategic setbacks” since the 2017 presidential elections and the fact that the party has “isolated itself politically by building itself in opposition to all left-wing currents.”

We do not know whether this interpretation is the personal bias of the author, but it is certainly shared by a number of former members of the LCR or even of the NPA itself, many of whom are now in LFI, the PCF, or the PS.1 Such reasoning flows from a logic, based on the elections and the relationship to the institutional Left, that is not the class struggle and revolutionary perspective that animates a large majority of NPA militants. The account in Le Monde of an opposition that accuses the historical leadership of the NPA of “wanting to get closer to Jean-Luc Mélenchon’s friends and that has been judged guilty of abandoning ‘revolutionary purity’ in favor of reformism” is without a doubt a convenient explanation, but one that is also false and masks what is essential.2

It is false precisely because that is not what’s at stake. Contrary to what Zappi writes, no one accuses the leadership of “wanting to get closer to Jean-Luc Mélenchon’s friends.” Comrades who were seduced by that perspective have already left the NPA to do so, in several waves of departures of NPA militants and leaders to the Left Front and then LFI.3 It masks what is essential because reality is much more complex. The sources of the current crisis of the NPA can be found in the incapacity of its former majority current to assess the historical mobilizations of the last few years — the movement against the Hollande Labor Code;4 actions by SNCF workers;5 the Yellow Vests; and then the Macron pension reform)]] — and build itself on that basis, and more generally in the failure of the NPA’s founding plan.

What Is Really behind the Current Crisis?

The main thing to understand is why the former leadership is now considering a split — which some people hope will be “amicable.” It is because the former leadership has become a minority within the organization’s rank and file. And, as the next party congress approaches, its coming out of the 2018 congress with only a plurality provides zero optimism.

This assessment is not so much about upcoming elections as it is about the NPA’s intervention in the most recent events of the class struggle and in the face of newly emerging political phenomena. Beyond the often correct interventions in the media by Olivier Besancenot, a founder and main spokesperson of the NPA, the party and its leadership have had tremendous difficulty understanding the unfolding situation, intervening correctly, and appearing as a credible alternative in the eyes of the thousands of people who were mobilizing.

On the other side, though, things are less negative. Most of the activists with “influence with certain youth mobilizations or with the radical fringes of the social movements,” as the article puts it, are on the same side as Gaël Quirante, also mentioned in Le Monde. He played a leading role in the mobilizations of postal workers and other workers in the Paris suburb of Hauts-de-Seine.

This is notably the case of our comrade Anasse Kazib, a leading figure in the struggle of railway workers against the 2018 Railway Pact6 and the historic strike of transport workers that was part of the movement against pension reform last December and January. He became a spokesperson for the RATP-SNCF Coordinating Committee,7 which played a decisive role in maintaining the transit strike, and thus the movement, at a time when union leaders were calling for an end-of-year truce.

This is also the case of the activists who were at the origin of the Pôle Saint-Lazare demonstration, through the Intergare (a collective of unionized and nonunionized railway workers that emerged from the fight against the 2018 Railway Pact) and its links with the Adama Committee.8 Pôle Saint-Lazare brought together thousands of militants from the labor movement and working-class neighborhoods to demonstrate alongside the Yellow Vests.9 They went on the offensive at the very time union leaders were doing everything possible to avoid a convergence between the labor movement and the Yellow Vests — going so far as to condemn the “violence” of the Yellow Vests in a December 6 communiqué, to which part of the NPA leadership unfortunately adapted.

It is no surprise, in this context, that most of the comrades who joined the NPA as a result of the latest mobilizations, both in workplaces and among the youth, did so at the invitation of comrades who were members of tendencies other than that of the leadership of the former LCR.

A major problem for the former LCR current is that it no longer participates in struggles with a politics independent of the trade union and political bureaucracies, of gaining the confidence of those engaged in these struggles through concrete militant acts, and of inviting these activists to join and build a party that defends a revolutionary alternative and a communist perspective. Those politics — considered “old school” — have been replaced with the illusion that running a good candidate in the elections will automatically lead people to join (and vote for) the “anticapitalist party.”

Relatedly, the more general problem facing the NPA is the failure of its founding plan, which was based on these illusions but also on conceptions developed over years by the international grouping that claims to be the “Fourth International” — which most activists continue to refer to by its original name, the United Secretariat (USec). The draft of this plan, born in the early 1990s, consisted of building “broad,” “strategically undefined” parties — that is, parties that do not take a clear position between reform and revolution, between the “progressive” reform of capitalism and the revolutionary overthrow of the system from a socialist or communist perspective.

This approach, leading to various types of alliances with so-called left-wing reformist currents, has also led to a series of disasters for the organizations of the USec — from the loss in Brazil of an organization (“Socialist Democracy”10) that supported and participated in Lula’s social-liberal government in 2003, to the recent recantation of Podemos in the Spanish State, and in Italy to the disaster of the “Communist Refoundation,” now dead and buried.11

It is this conception of party building from which we must break today, definitively, if we want the 12 years of the NPA’s existence to have advanced the revolutionary movement and not end in a complete failure — like the experiences cited above.

“If You Want to Kill Your Dog, Say It Has Rabies”

The outgoing leadership seeks to mask a contrasting reality: the currents on the Left within the NPA are advancing, reaping the fruits of their interventions in the class struggle, while the relative weight of the former LCR majority diminishes after each successive party congress. As part of their desire to avoid a real political balance sheet of the NPA some 11 years after its founding, they engage in maneuvers — such as trying to prevent new members who joined the party after the last major uprisings from voting in the run-up to the next congress, or scapegoating and using pretexts, such as “tendencies” that would challenge decisions and not pay their fair share of dues.

What’s really going on is that the majority of those who came from the LCR are unprepared to accept being a minority in an organization that they founded. Nevertheless, most NPA militants oppose the split. They intend to keep the NPA going and reestablish it on the basis of an analysis that accounts for the radical changes in the situation that have taken place, the strong return of class conflict, and the prospect of major social uprisings to come with revolutionary potential. All that challenges the vague strategic delimitations of the NPA’s founding and demands clarification.

Under present circumstances, the NPA’s disappearance as an independent anticapitalist organization would benefit the institutional Left, the LFI in particular, which is already eyeing the upcoming presidential election and would like to run without there being a candidacy to its left that would gain real attention.

That is why LFI, in the person of Adrien Quatennens,12 wrote to the NPA leadership a few weeks ago and proposed a meeting to discuss the presidential election — in which it thinks it could get Mélenchon to the second round, betting that the threshold will be lower than in 2017.13

Contrary to the logic of split and division, which would lead to a small party with almost no presence in the workers’ movement or even to the outright disappearance of the NPA, the political situation ought to be pushing anticapitalists in a completely different direction. The existence of independent anticapitalist and revolutionary organizations will be, more than ever, a decisive factor in the new situation, which is marked by a resurgence of the class struggle on a global scale and in which there will be a fierce battle over who will pay the costs of the health and economic crisis, in which the institutional parties have less and less credibility among the masses, and in which a new urgency has emerged to put an end to this racist, patriarchal, and environmentally destructive capitalist society.

None of this means the NPA is perfect. Far from it. But it can become a tool for the recomposition of a Far Left that fights for a mass revolutionary party, nourished by militants from different traditions and by the thousands of workers and young people who have awakened politically in the last mobilizations. It can “weigh in” not on the side of LFI and EELV,14 but on the side of struggling workers and in their interests, for the overthrow of the capitalist system and for a society without exploitation and oppression.

Far from proposing the simple continuation of the “debates among tendencies,” which has been responsible for the crisis of the NPA, we believe that a period of class struggle such as the one that has opened up since 2016 offers a new opportunity for building a mass revolutionary party in France. It is time to take account of the militants and various sectors that have stood up courageously in the uprisings of recent years, and to open the doors of the party (rather than close them) for a discussion of the strategic balance sheet of recent struggles and the potential for rebuilding an anticapitalist and revolutionary far Left that is equal to the tasks ahead.

That is the political approach that the militants of Révolution Permanente intend to defend within the NPA, alongside other tendencies, at the next congress and beyond.

First published in French on August 3 in Révolution Permanente.