With the temporary moratorium on evictions expiring, many states have announced plans to resume evictions. This is a heartless move that criminalizes poverty and increases the risks for spreading the coronavirus even further. 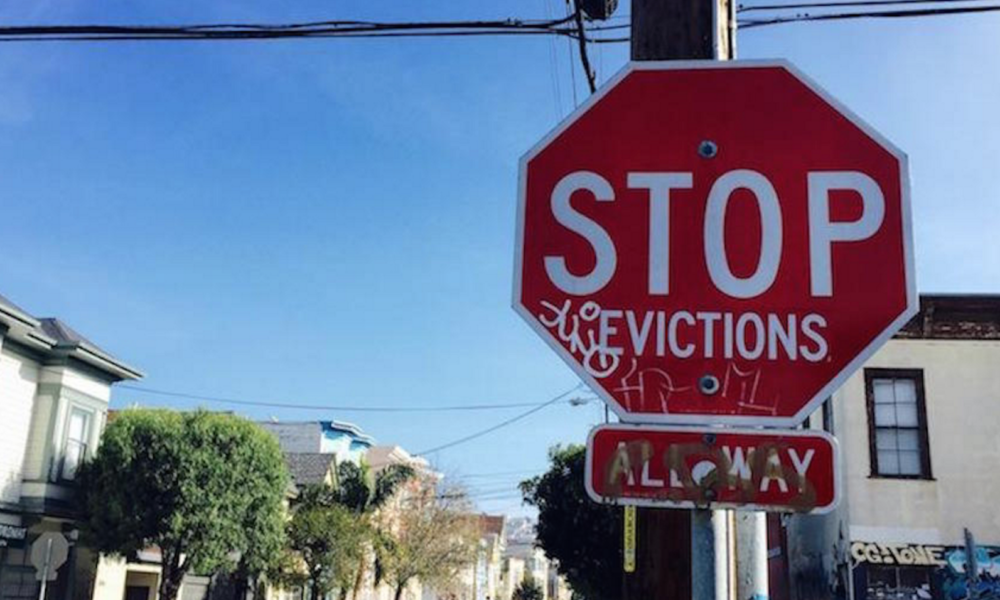 When the coronavirus pandemic first began to reach deadly heights in the U.S. in March, many states bowed to public pressure and placed a moratorium on evictions. However, this eviction moratorium did not nearly go far enough in protecting those who are at risk of homelessness because of the coronavirus-related shutdown — as well as those who were at risk before the current crisis. The nationwide eviction moratorium only applied to a small fraction of properties, and states had to implement their own, often qualified, moratoriums. Additionally, the moratoriums never prevented landlords from filing new eviction notices even during the eviction period. So, these notices built up while the courts were closed, and now they can all be handed out en masse now that states across the country are re-opening.

On May 19, the Oklahoma County Sheriff’s office posted the following tweet, which quickly went viral:

This is difficult but we want to give as much notice as possible. Deputies will start serving judicial eviction notices this week & enforcing evictions on May 26, 2020. Once the order is served tenants have 48-hrs to leave. We will be compassionate & respectful during evictions. pic.twitter.com/8T7naHkk9X

Not surprisingly, the most common response to this message was outrage. To throw people out of their homes in the midst of both a pandemic and an economic crisis and then claim to be behaving with “respect” or “compassion” is laughable. The fact of the matter is that people will almost certainly die because of this decision.

A recent study found that the massive unemployment that has resulted from COVID-related shutdowns could cause the homelessness rate to grow by 45%. Even before the current crisis, over half a million Americans were homeless, with Black and Indigenous people massively overrepresented in the homeless population. The connection between eviction and homelessness is clear. Eviction was one of the three leading causes in a recent study of homelessness in San Francisco, after job loss and drug use. Eviction rates have been rising in several U.S. states even before the pandemic. A recent report from Michigan showed that a staggering 1 in 6 tenants faced eviction in 2018.

In the age of the coronavirus pandemic, the homelessness crisis is now also part of an even greater public health crisis. Scientific American recently published an article titled “Coronavirus Presents Unique Threat to the U.S. Homeless Population” in which they showed that individuals experiencing homelessness are especially vulnerable to respiratory diseases such as COVID-19. Homeless individuals are forced to choose between sleeping on the street or entering crowded shelters. In addition, because states are reopening early, it is highly likely that we will see another spike in coronavirus cases, which will only increase the risk factors for homeless people and the rest of the working class. This is the context in which states are deciding to resume evictions.

Furthermore, evictions criminalize poverty, poverty that has been caused by a capitalist crisis. Individuals and families who are unable to pay their rent are forcibly removed from the premises by the police, who are acting on behalf of the landlords. Even in “normal” times, this process is a prime example of the depravity of capitalism. Evictions also have long term negative consequences including potentially limiting the ability to find new housing accommodations. It is a heartless and deadly tactic used by landlords to continue the exploitation of their tenants.

As we are seeing now, the eviction moratoriums put in place at the beginning of the current crisis were not enough to protect people from evictions. Additionally,  the lack of rent freeze or rent forgiveness has brought many closer to the crisis point of eviction. A report out this week shows that 23.7% of the March workforce is now unemployed. We are in the midst of the greatest economic crisis since the Great Depression. Drastic measures must be undertaken now to demand protections for the working class. There must be nationwide rent forgiveness, guaranteed housing for all people, a total moratorium on evictions, a quarantine wage to all workers, and hazard pay for all essential workers.

The capitalists and their politicians are, once again, revealing their true colors during the midst of this crisis. They want us to pay for their crisis, and they don’t care if we live or die. The police are perfectly happy to work for landlords and have no problem throwing working class and unemployed people out into the street, without regard for the fact that displaced people are significantly more likely to contract coronavirus. Landlords, most of whom are big real estate companies and not individuals, can’t profit off of people who aren’t paying rent, so they are throwing out vulnerable people to potentially fall ill and die, all so they can protect their own profit margin. This is a terrible crisis that demands radical solutions. Stop The Evictions Now!