Striking German Dockworkers Attacked by the Cops and Courts

Thousands of workers at Germany’s major container ports mounted a 48-hour strike on July 14 and 15. Police attacked the demonstrators, and the courts have banned further strikes until the end of August. 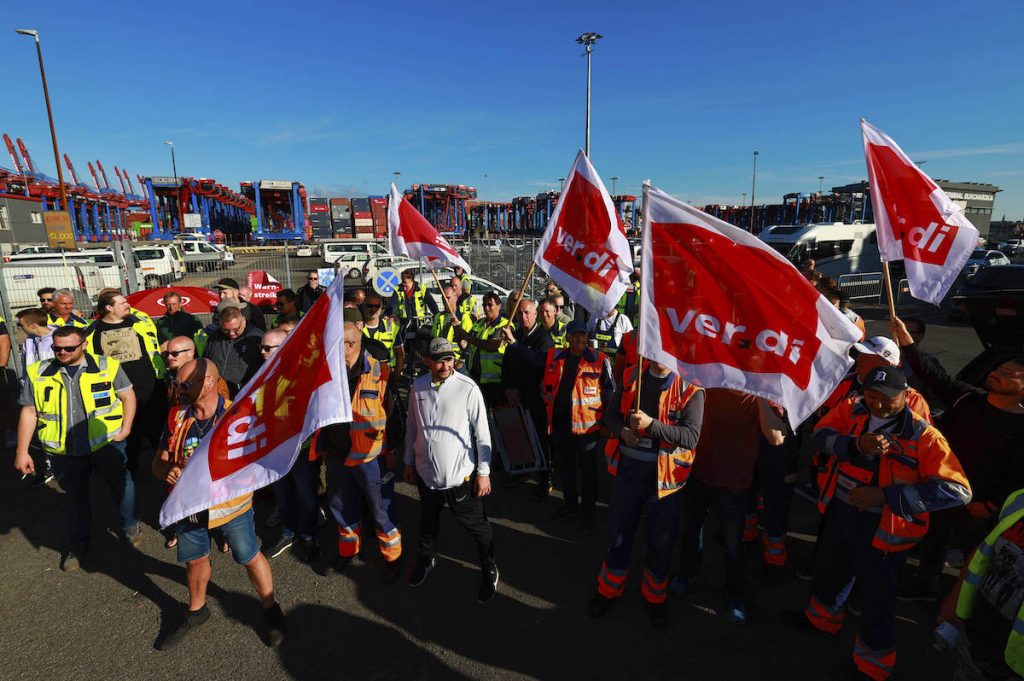 Beginning on Thursday morning, July 14, Germany’s North Sea ports were hit by the longest dockworkers strike in 40 years. On Friday morning, thousands of strikers gathered for a main demonstration in the city of Hamburg.

The ver.di union is negotiating for a wage increase for 12,000 employees at ports in Hamburg, Bremen, Bremerhaven, Brake, and Wilhelmshaven. The union is demanding an inflation adjustment of about 7.8 percent, a wage increase of 1.20 euros per hour, and further supplementary wages for a year depending on the work classification. All told, this amounts to a demand for an increase of as much as 14 percent. The Central Association of German Seaport Companies (ZDS) is offering 12 percent, and a contract of only 24 months. The union is rejecting this offer, which would force workers to bear the risk of inflation in the contract’s second year.

On Thursday, the Hamburg port logistics company HHLA and its Bremen-based competitor Eurogate went to labor courts in Hamburg, Bremen, Oldenburg, and Wilhelmshaven seeking temporary injunctions banning the strikes. These courts permitted a 48-hour action but banned further work stoppages in Hamburg and Bremen until August 26. While the plaintiffs and ver.di officially reached a “settlement” in the Hamburg labor court after the court questioned formal elements of the union’s strike resolution, this ruling constitutes, de facto, a legally enforced ban  serving the bosses’ interests.

“We are taking the streets because the right to strike has been broken,” declared Deniz Askar, spokesperson for shop stewards at Eurogate Hamburg.

The legal attack on the strikers is only the beginning. On Friday, police unleashed a violent attack on the strikers at the demonstration, beating and pepper-spraying dockworkers. A video shows angry workers pushing back the helmeted police officers. Other footage shows police officers roughing up a worker pinned against a police vehicle during an arrest. Our correspondent from Klasse Gegen Klasse was also attacked by the cops.

Images like that haven’t been seen in Germany for many years; strikes have been mostly peaceful. It’s a sign of how much the mood has changed. The strike isn’t just about a small increase in pay; it’s about who is going to pay for the crisis.

The strike has already taken on historic proportions. Such action at the ports means that central sectors of German and European logistics are entering the fray for the first time in decades, in the midst of an extremely tense situation fueled by the war in Ukraine, inflation, and the energy crisis. The German government wants to pass on the costs of this crisis to the workers and the poor. The dockworkers are striking against the continuing decrease in their real wages, challenging the government’s course.

Several workers interviewed by Klasse Gegen Klasse emphasized that their fight is not only to win their own wage demands, but also for the German people as a whole. As one worker, Angelo, put it, “We’re here because we’re tired of the authorities continuing to line their pockets so much while there are fewer and fewer jobs for our co-workers, and the money we have keeps shrinking. We have to buy gas, bread, and butter. We stand for money being distributed reasonably.”

The ver.di union has also launched a popular initiative to address the issue of arms exports. Dockworker Jana K. told Klasse Gegen Klasse, “We know arms exports are taking place at the docks, but we can’t verify it. Dockworkers in Genoa [Italy] have taken on the same issue and managed to shut down the exports. That should be our goal as well.”

Today’s port strike makes it clear that the momentum of class struggle in Germany is growing. This strike’s demands go a bit beyond the “social partnership” the trade union bureaucracy is always trying to mediate between the workers and the bosses. Workers are not content to moderate their demands “responsibly” to serve the companies’ interests.

Centered in logistics, this strike actively challenges the war and the logic of the German federal government’s approach to the crisis — sending a signal to other sectors. Collective bargaining for the metalworkers and electrical workers begins this fall. The government is calling for restraint and has already invited the unions and corporate associations to a roundtable. But the demand of IG Metall — Europe’s largest union — for an 8 percent pay increase certainly promises a dynamic round of strikes.

First published in German on July 15 in Klasse Gegen Klasse.