Once again, Black America has surged to the front lines of the global struggle. The US had been an example of right-wing lunacy, political breakdown and murderous incompetence. Now it’s the setting for a simultaneous, spontaneous offensive of the oppressed. We are republishing this view from socialists in Australia. 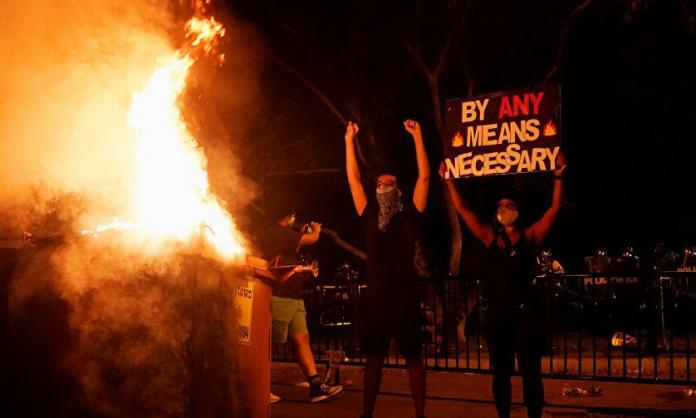 Once again, Black America has surged to the front lines of the global struggle. This year, the United States has stood out primarily as a leading centre of right-wing lunacy, political breakdown and murderous incompetence in the pandemic. Now, it is showing the world something else: the potential for sudden eruptions of mass resistance that can change everything.

Trump’s election was an historical turning point. So was the pandemic. But living through turning points can be frightening, painful and dangerous. For most of this year, the oppressed working class of the United States has experienced one new nightmare after another: mass graves, mass unemployment and the ghoulish spectacle of armed protesters demanding the economy be reopened. As is inevitable in the United States, each of these phenomena devastated Black workers more than anyone else. They die in greater numbers during the pandemic, their economic situation deteriorates more in periods of high unemployment and they have the most to fear from armed far-right militias.

But the riots have added something new to the balance sheet: now, the oppressed are making history, rather than just suffering from it.

Starting in Minneapolis, the protests spread with incredible speed, consuming dozens of cities around the United States. Led by Black people, they have drawn support and participation from people of all races – as has been the pattern in previous US riots, from the rebellions of the 1960s to the Los Angeles riot of 1992. The movement has shown that many thousands of people around the US are willing to take over the streets and to destroy symbols of oppression – police headquarters, police cars, courthouses, statues.

“What are you changing by tearing up a city?”, mayor Keisha Lance Bottoms of Atlanta asked. But the protesters know what they are changing: themselves, each other, and the world in which they live. “May 26, 2020 changed my life forever”, Kayla JuNaye Johnson, a 21-year-old student in Louisiana told the New York Times. “I stood on the front line shouting, ‘Hands up, don’t shoot!’ Now I finally know how us African-Americans felt during the civil rights movement. I am a part of history.” Jason Phillips, a 27-year-old who joined the protesters in Manhattan, put it similarly: “I’m really just tired of sitting at home and just doing nothing, basically watching this happen. I need to be a part of history”.

This movement has involved peaceful protests as well as street-fighting and property destruction – rioting. Both peaceful protests and riots are ways to make symbolic statements. They’re also both practical organising tools. Symbolically, they highlight the desires and demands of the oppressed – in their choice of assembly points, targets and slogans. Practically, they prove to the participants how many people are on their side and what they’re willing to do, providing a direct measurement of the potential collective power that exists. And when rioters burn down police headquarters or storm the fences of the White House, they add another layer of symbolism, inspiration and potential for future action.

Riots illustrate the depth and breadth of popular hatred of the establishment, of the alienation from its institutions and of the willingness to fight – “by any means necessary”, as Malcolm X famously said, and as is written on placards at some of the demonstrations.

When mass anti-racist riots and protests broke out in the last few years of Obama’s presidency – beginning in Ferguson, Missouri, and Baltimore, Maryland, before becoming an ongoing movement –it was a breakthrough. Obama’s presidency was supposed to defuse Black fury at the permanent racial inequality, poverty and police brutality. But Ferguson proved that even the enormous symbolism of a Black President of the US could not contain the anger felt by the poor and working-class Black population.

The riots today are different. They are not a rerun of the movement that became known as Black Lives Matter. They take place in a different United States. The last wave of Black rebellion occurred in a society that seemed to be stable but fraying at the edges, held together by the charismatic neoliberal technocrat Obama, and slowly but surely emerging from recession. The United States today is experiencing an economic crisis with no precedent. It is in the middle of a pandemic that has claimed 100,000 lives, yet it is about to reopen the economy and suspend many economic protection measures – risking both an increase in the death rate and a collapse in living standards. It is several years into a political crisis symbolised by an incompetent maverick president connected to the far right and detested by the working class in most major cities.

The uprising in the United States may come to signify the opening of a new phase of the crisis: it has made the US the setting for a simultaneous, spontaneous offensive of the oppressed.

Given that the protests were directly inspired by police killing Black people with apparent impunity, the protesters have shown extraordinary courage and social responsibility in besieging police stations. These protests are unplanned, but they are not anti-social. The media can fixate on acts like looting. That can create a misleading impression that the rioters are individualistic, selfish, and just looking out for a chance to break stuff and take things. But anyone who watches any of the hundreds of hours-long livestreamed broadcasts circulating on social media will see the truth. The riots are remarkable for the friendly camaraderie and maturity shown by the participants. From late night until dawn, the streets have been taken over by an ever-evolving community of people who are trying to transform their cities from racially segregated sites of oppression into free and open sites of resistance and collaboration.

I spent hours watching a livestream from Minneapolis that ran until 5:00 am local time. The rioters were calm, happy and friendly. They sat down together on the street to watch police buildings burn. They pulled up on bikes to ask each other for news and offer each other drinks. They swapped jokes and stories. They weren’t scared of each other. Why would they be? For most people, the streets were probably safer than they’d usually be at that time of night. This was not a crazed outbreak of sociopathic violence: it was a collective uprising targeting, in the main, very specific symbols of oppression.

“The violence is planned, organised, and driven by anarchic and far left extremist groups using Antifa-like tactics”, according to US attorney-general William Barr. That’s a reassuring lie, both for anarchist sects who think that their conspiratorial black-bloc style adventures have anything in common with a mass uprising, and for the right-wingers who’d like to think that the uprising is a conspiracy that can be uprooted with a few targeted arrests. But the reality is obvious: this is a mass movement of the oppressed. The US ruling class, the political elite and the “progressive” bureaucracies that try to keep social discontent within peaceful and legal methods are faced with an inconvenient truth: ordinary people want to burn cops out of their lairs in the pursuit of a just society.

What next? Peaceful mass marches are symbolic, and so are riots. Burning down the cop shop shows what you want – but the flames themselves can’t deliver it. Neither the police nor the system they protect can be beaten in the long run by spontaneous rebellions or property damage. As a famous aphorism of the left reminds us, “you can’t burn down a social relation”. These riots, and their symbolic destruction of police property, are important because they pose the question of how to deal with the US state – not because they answer it. But just as a well-timed rock through a window can trigger a riot, a well-timed riot can inspire broader and deeper upheaval. Riots can spread and radicalise social movements.

When US cities were consumed by riots in the mid-1960s, the movement for Black civil rights was pushed in a revolutionary direction. When, in 1968, French students spent a night fighting cops in the streets, they sparked the biggest general strike in history – millions of young workers were inspired to match and then exceed the defiance of the students. And two years ago, in France again, the street-fighting Yellow Vests movement spent weeks engaging in mass urban combat with the police. That helped to inspire a revival of rank-and-file left-wing trade unionism, led by workers who wished their organisations would fight that hard.

Hong Kong’s heroic youth movement helped inspire a wave of global protests by showing the world how to combine street combat with mass protests: how to mix courage and daring and hatred of the police, with collectivity and cooperation in the struggle for a better world. Already, the “essential workers” of the US have acted in solidarity with the rioters: some bus drivers, one of the sections of the working class most exposed to the dangers of COVID-19, refused to transport arrested protesters to jail.

We wrote in March that the coronavirus was born into a world “ready to explode”: a world in which political traditions were disintegrating, waves of rebellion were growing, and an attempted revival of reformism seemed to have reached its limits, leaving a generation to seek other political frameworks in which to achieve the dream of social equality.

The explosion is here, in the world’s most influential and powerful country. As we learned throughout 2019, movements like these can inspire imitators around the world. A modern international socialist movement will have to take the fighting spirit and fearlessness of the rioters into the warehouses, bus depots and abattoirs of the “essential workers”. Thank you, rioters: you’ve provided new role models in the global crisis.