The Battle of Seattle: Shaking Capitalism

Twenty years ago, protesters from across the world descended on Seattle to protest against the World Trade Organization, sparking a movement against neoliberalism that is still with us today. 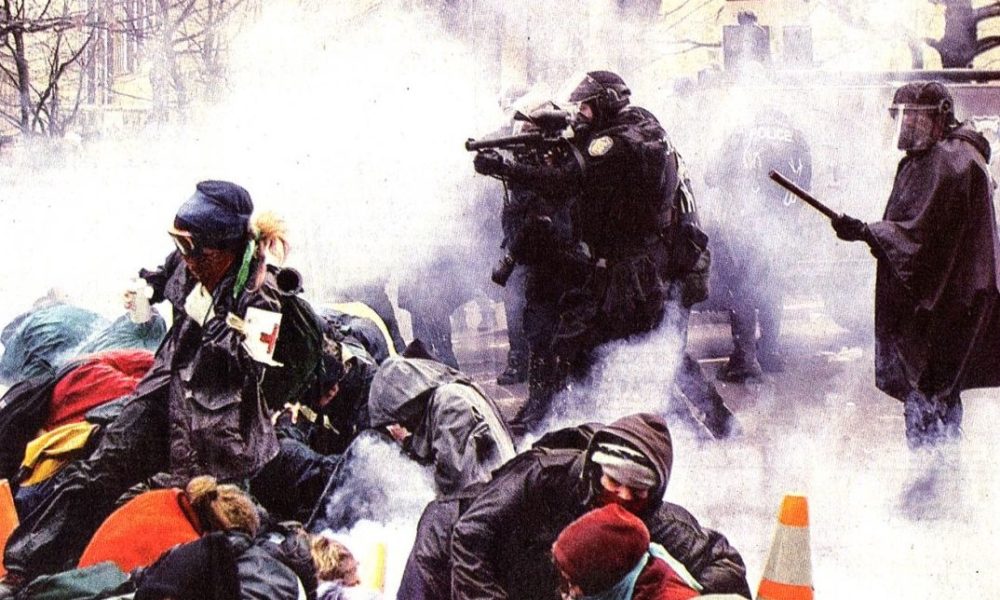 Two decades ago, the WTO organized a worldwide summit in the city of Seattle in the midst of a neoliberal consensus and the deepening of global inequalities. The summit took place between November 29 and December 5, 1999. The WTO was created in order to advance the global free trade demands in those years from the world’s major economies in the face of the new challenges posed by globalization. This type of meeting meant a leap in the control of trade by the most powerful states, which tried to safeguard the interests of large national companies in the race to the world market.

In the United States, as in the rest of the world, the workers suffered the consequences of the NAFTA agreement, which precarized and deteriorated working conditions at a global level. The AFL-CIO called for a massive mobilization against the WTO summit. A wide range of trade unions, youth, environmental, indigenous, feminist, Christian and human rights organizations came together in a historic counter-summit that gave rise to a global movement aimed at anti-capitalism.

On November 29, five demonstrators were arrested by the police. On November 30, the historic mobilization is known as “The Battle of Seattle” took place, with tens of thousands of demonstrators. The march was organized under the slogan “Against Economic Inequality and Foreign Debt; Against Profit Over Life.” This slogan expressed the demonstrators’ opposition to the agreements that had been brewing in the WTO by the big corporations. In order to prevent the meeting of WTO delegates, the demonstrators decided to sit down and occupy the main streets of the city center. In a historic event, trade unions came together with youth activism, environmental activism and an enormous arch of social organizations. This was a fact that was underlined by many demonstrators who “had never thought that one day they would march together.” The police unleashed fierce repression and an all-day pitched battle in the streets of Seattle. The WTO had to suspend its inaugural act and the authorities declared a curfew. Protests and clashes with the police continued for another three days, awakening solidarity amongst youth and workers around the world.

The Seattle counter-summit was the founding act of the anti-globalization movement that would continue to develop with different intensities, marking important moments of resistance like the subsequent counter-summits in Davos, Washington, Prague, Genoa. Seattle was also the starting point of new youth activism characterized by the rejection of neoliberal policies and the domination of big multinationals.

This first great resistance to the advance of capitalism and imperialism broke the idea of harmonious globalization. The anti-globalization movement contributed to challenging the institutions of capitalism such as the WTO and the later G8, G20, WB, and IMF. It also contributed to the development of international solidarity as response neoliberalism and hyper-exploitation of the working class on a global scale.

The combativity of the movement called into question the idea of capitalism and all-powerful imperialism as incapable of being challenged by the people. The Battle of Seattle is the emblem of youth who, at the end of the nineties, already resented the effects of neoliberalism: the precariousness of work, the privatization of public services. The yoke of free trade was a heavy burden for millions of young workers and students around the world. This generation was inspired by the Zapatista rebellion of 1994 in Mexico. It participated in the student revolts in Indonesia against the Suharto dictatorship in 1998 and in the 1999 UNAM strike in Mexico in defense of public education. Youth revolts are contagious and the anti-global revolt was no exception. From the streets of Seattle and the Zapatista rebellion also emerged the growth of independent media. One cannot understand Occupy, the Indignados movement in Spain or the young people of Tahrir Square in Egypt self-summoned through social networks without the foundational groundwork put in by the generation of Seattle.

Although enormously disruptive, the anti-globalization movement could not break the neoliberal order. In Seattle, the rebellious youth and the working class acted in common on the street. However, the participation of working-class organizations was not decisive and this put limits to the movement. On the one hand, the union bureaucracy refused to push for a strike to stop the repression in Seattle and for the movement to be strengthened. The workers, without leadership, participated in a diluted way. This was also the case of the anti-globalization actions that spread to Canada and Europe. On the other hand, the working class and its organizations were very weakened as a result of the neoliberal offensive. This meant that the social power of the working class based on its organizations and workplaces was not a determining factor. Another element that played against the development and triumph of the movement was the fact that socialist ideas were totally discredited. The Soviet Union had fallen, and the youth did not identify with the Stalinist monster that everyone called “real socialism.” The delegitimization of socialism also resulted in the discrediting of socialist organizations. In that framework, the anti-globalization youth did not find a revolutionary political alternative and the reformist organizations channeled all the anger towards the renewal of the institutions of the capitalist order.

The legacy of the brave young people of Seattle who confronted the state and the police in order to challenge the inequality and misery of capitalism has a fundamental place in these moments where all kinds of discourses of “the misery of the possible” take place. Capitalism has only become more cruel, more unequal and even more capable of destroying the planet and the living conditions of millions. As in those days, young people are on the front line facing the neoliberal order in Chile, Lebanon, Iran, Iraq, and other countries. What is new is that the youth revolt is motivating the working class and the masses to go out and fight. In the United States, socialist ideas are taking on a new impulse that hasn’t been seen in a long time. We have to prepare ourselves to challenge the imperialist order once again revitalizing revolutionary ideas within the new international awakening of youth and masses.