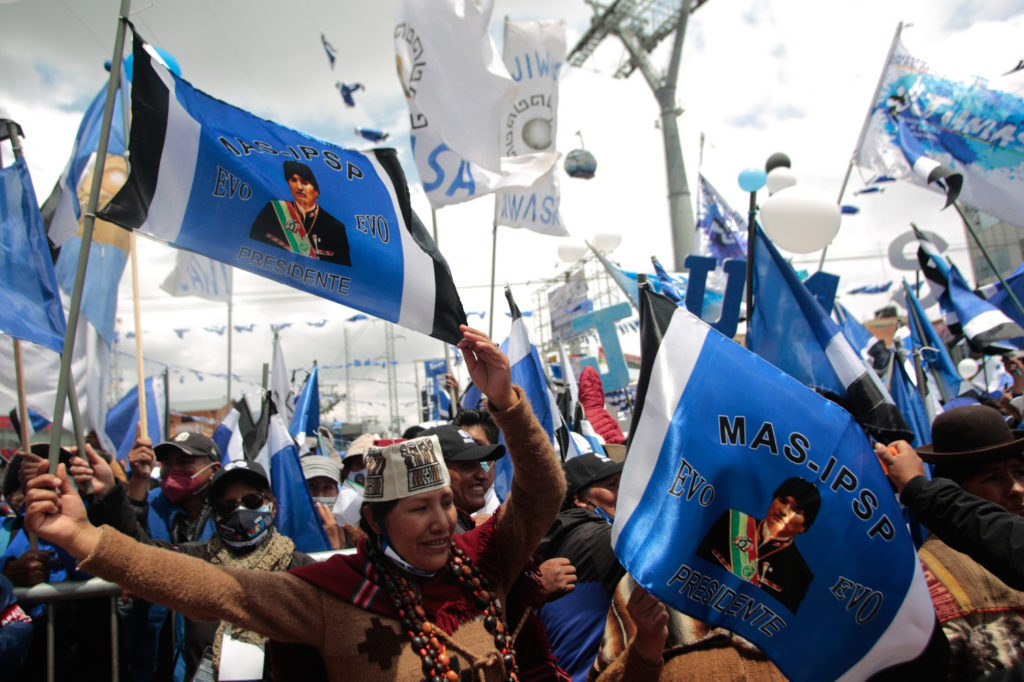 On Sunday, the Movement for Socialism (MAS), the party of former president Evo Morales, won the first round of the presidential elections in Bolivia. Winning 52.4 percent, according to initial results, MAS candidate Luis Arce will not have to go to a second round. He easily beat the moderate Right candidate, former president Carlos Mesa, with 31.5 percent and the fascist Right of Luis Fernando Camacho with 14.1 percent.

The MAS got a better result than in the elections of October 20, 2019, which marked the beginning of the right-wing coup. One year ago, 47 percent of Bolivians voted for Morales, but opponents of the MAS accused the government of fraud. The Organization of American States (OAS) referred to “clear manipulation,” but even now, no fraud has ever been proven.

The Bolivian Right began to mobilize, with the support of Donald Trump in the U.S. and Jair Bolsonaro in Brazil. After several weeks of growing tension, the Bolivian army “suggested” that Morales resign, and he was forced to flee the country on November 10.

Before long, the coup plotters had installed a minor right-wing politician named Jeanine Añez from the Democrat Social Movement as “interim president.” Christian fundamentalists declared that the bible had returned to the presidential palace in La Paz, while police officers tore the wiphala, the indigenous flag, off their uniforms.

Resistance against the coup sprang up across the country. Police and army forces committed a massacre during a blockade at the Senkata gas plant in El Alto on November 19, killing 11. A further 11 were killed at a protest of coca farmers in Sacaba in Cochabamba on November 15.

But it wasn’t just the Right in the U.S. As Shawn Gude points out in Jacobin, liberal publications in the U.S. celebrated the coup as well: The Atlantic referred to an “inspiring victory of the Bolivian people,” whereas the New York Times presented it as a necessary evil. The only major U.S. politician who called out the coup as such, in fact, was Bernie Sanders. (This was a welcome change from Sanders’s support for the Trump administration’s imperialist offensive against Venezuela.)

There is a striking bipartisan consensus in the U.S. on Latin America: Liberals and conservatives alike treat the continent as their “backyard.” So much of the U.S. foreign policy establishment is lining up behind Biden because Democrats stand for the same imperialist policies — but are more “diplomatic” and therefore more effective. Trump’s clownish national security adviser John Bolton did an almost laughably terrible job trying to foment an armed rebellion in Venezuela. Compare that with the Obama / Clinton team, who successfully organized coups against progressive government in Honduras in 2009 and in Paraguay in 2012. In a certain sense, Trump’s incompetence makes him the less dangerous imperialist.

The basis for this consensus was made clear by billionaire Elon Musk, who needs access to Bolivia’s lithium reserves in order to build supposedly “green” cars. Musk tweeted: “We will coup whoever we want.” — a case of a capitalist saying the quiet part out loud. “We,” in this case, refers to both parties of the U.S. capitalist class.

A Defeat for the Right

As André Barbieri argues on our sister site Esquerda Diário (in Portuguese), the election results represent a “humiliating failure” not just for the Right in Bolivia, but for right-wing forces in the entire region. Jair Bolsonaro and the Brazilian military brass did their utmost to install a Christian fundamentalist, racist, and pro-imperialist government in the neighboring country.

Things are also looking bad for the right in Colombia, where the government of Ivan Duque was confronted by giant youth protests against police violence. And the day of the vote in Bolivia, October 18, marked the one-year anniversary of the uprisings against the government of billionaire Sebastián Piñera in Chile, with protesters taking to the streets en masse again. All this, combined with the dim prospects for Donald Trump in the elections of November 3, signals the limits of the right-wing offensive in the region.

Yet what can be expected of a new administration of Arce and the MAS? Morales came to power in 2006 as Bolivia’s first indigenous president. His election was a delayed result of the revolutionary mobilizations against privatizations in the early 2000s. Neoliberal policies had impoverished the (mostly indigenous) masses of Bolivia in the service of a (mostly white) elite. Morales’s government was able to significantly reduce poverty in the Andean country, since a commodities boom filled the state’s coffers. Like all the “Pink Tide” governments in Latin America, the MAS was able to give to the poor without disrupting the capitalists’ profits.

The MAS, along with all the “anti-neoliberal” in the region, largely maintained the same model of capitalist accumulation as their neoliberal precursors. The emphasis on the exploitation of natural resources (in a context of high prices for raw materials) and social assistance programs for the poor created what some scholars call a “compensatory state.” The negative impact of the exploitation of natural resources, especially by foreign capital, was compensated with cash transfers for the poor. This led to some conflict with indigenous populations, like the ones that inhabit the TIPNIS region whose lands were to be destroyed for agri-business.

At the same time, the MAS was able to co-opt mass organizations of the workers and peasants. The Bolivian trade unions of the COB (the Bolivian Workers Central) who have been incomparably militant throughout the twentieth century, were finally brought under state control. The MAS helped create a corrupt union bureaucracy that acted as a police force against the workers’ movement, while restricting independent unions.

Faced with a coup, Morales stuck to his policy of holding back protests and directing them into electoral channels. The MAS was responsible for demobilizing the resistance against the coup at key points, such as when the blockade at Senkata gas plant threatened the functioning of the energy system in large parts of the country. In the run-up to the elections, the MAS leaders called on their supporters to respect the results, whatever they may be. The fact that the MAS won such a large victory is not because of their pacifistic policy of negotiating with the Right, but in spite of it.

Now, Luis Arce will come to power without a huge surplus from exporting raw materials, which Morales used to get support for his government for 14 years. On the contrary, Arce will face an unprecedented social, economic, and health crisis. In the next year, Bolivia’s GDP is expected to contract by 11 percent. The masses of workers and peasants, who were able to drive back the forces of the coup, will now expect a lot from what they perceive as “their” government.

The fascists in Santa Cruz around Camacho are not going anywhere. The police, who grabbed at the first chance to burn the Wiphala and murder so-called “Indians,” are still in place as well. The army who carried out the coup remains in power. Above all, U.S. imperialism retains its countless levers of power to dominate Latin America, including military bases, multinational corporations, and the IMF.

For 14 years, the MAS government negotiated with the Right, never once acting against the interests of the imperialist corporations and large landowners that make up the social base of reaction. The coup forces have suffered a serious setback for now — but they will regroup to strike again as soon as they see a chance. The only way to eliminate that possibility is to expropriate the Bolivian and international capitalists who need to keep the masses of Bolivia down. This is the only way to break with the legacy of colonialism in Bolivia.

Álvaro García Linera, former guerrilla fighter and Morales’s vice president, referred to the government’s program as one of “Andean capitalism.” Yet experience has shown that this program leaves a deeply repressive, racist, and pro-imperialist state apparatus in place. Only a program of socialist revolution, starting in Bolivia but spreading across the continent, can put Bolivia’s immense riches at the service of the working people in the country.

This is why Trotskyists in Bolivia, including the Revolutionary Workers League—Fourth International (LOR-CI), have never supported the MAS politically. They have fought against the coup and in defense of basic democratic rights, but simultaneously worked to build up an independent party of the working class that fights for socialism. That is our task in the United States as well.