The Cops: Racists and Strike Breakers

Cops are not workers; they are tools of capitalist oppression, and as such they have no place in the labor movement. Unions should stand with the protesters against racist police violence. 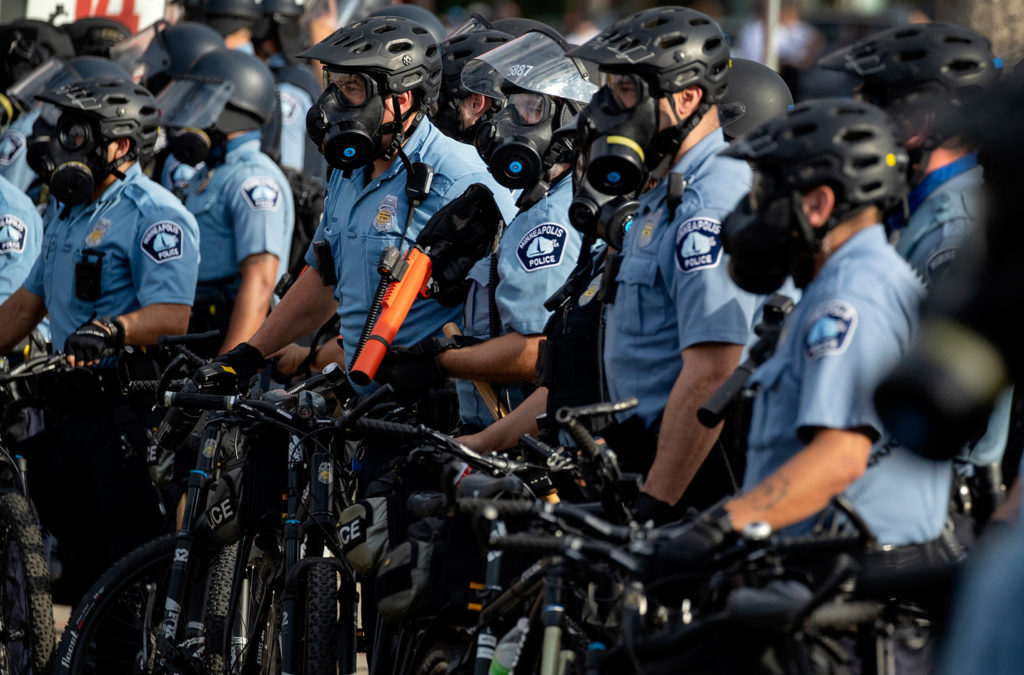 With the uprising in Minneapolis after the police murdered George Floyd, and the backlash from the capitalists’ media and the Right, there is bound to be a lot of bewilderment as to who our friends are and who are our enemies.

I know some union members are confused about the nature of the police and might take the wrong side on this issue. After all, aren’t there police unions? Correctional officers are one of the most heavily unionized sectors in the country. Aren’t they just public sector workers like firefighters or teachers? The differences stem from their functions.

Like the motto, the police do “protect and serve” — they protect property and serve the rich. That is their role. The origins of the police go back to slave catchers and strike breakers.

The first modern police force was formed when British merchants pooled money to hire professional guards to deter theft and control the tens of thousands workers on the docks. In the United States, Southern slave owners needed a force to track down “property” that had escaped North — a force that would later be used on workers as they started to organize and strike after the Civil War.

Policing appeared during the industrial revolution because capitalism requires a body of armed people to make sure that the growing number of have-nots don’t just take what they need from the haves. In the racist capitalist system of the United States, the bottom-most layer of the have-nots are Black workers. This is a consequence of the hundreds of years of chattel slavery, the use of the Thirteenth Amendment to maintain slave-like conditions through the prison-industrial complex, the use of Klan terror etc. Police terror against Black people is nothing new — it is a function of the system.

The confusion of some union members might stem from their own experience. With decades of docility in the labor movement, the experience of the average picket line — usually something called an informational picket where the goal is only to raise awareness and not physically stop people — involves a few officers overseeing the protest from a distance. Sometimes, if it gets a little rowdy, they might intervene to move the line to another part of the sidewalk or they’ll direct traffic. But for the most part they play the role of keeping things safe and harmless. Sometimes, they even support the demands of the workers — albeit they’ll say so in hushed tones to the staff organizer or whoever is designated to speak to the police. During the 2011 Wisconsin protests against attacks on collective bargaining, there were no arrests and a whole lot of fraternizing, since police technically “work” in the public sector too.

All this obscures their repressive nature.

If we go back a few decades, few workers had these illusions. During the height of the labor movement in the United States, the police killed workers with impunity. Just this week, eighty-three years ago, was the Memorial Day Massacre.

On May 30, 1937, Chicago Police fired into a crowd of strikers and supporters of the Little Steel strike. And they continued firing into the fleeing masses until they had killed ten people, permanently disabled nine, and injured another 28. Many of the casualties were shot in the back. The killings were declared “justifiable homicide.” President Roosevelt, who many reformist socialists today see as a model, said a “Plague on both your houses” in response to the massacre. No officer was ever arrested.

A few years before, in July of 1934, there were two bloody days: “Bloody Thursday” on the San Francisco waterfront and “Bloody Friday” in Minneapolis. In San Francisco, after police utilized tear gas and mounted charges, they turned shotguns onto the crowd. At the intersection of Steuart and Mission streets, Howard Sperry and Nick Bordoise were murdered. That evening, the police continued their offensive by firing into the union hall full of injured strikers and supporters. Again, no officer was ever arrested.

During the Minneapolis Teamsters Strike in 1934, workers employed flying pickets where they would pile into a truck and rush to anywhere there might be scabbing. On July 20, police baited workers with two scab trucks unloading merchandise. When a picket truck appeared, they fired their shotguns into it, wounding 67 and killing John Belor and Henry Ness. An investigation ordered by the Minnesota governor determined that “police took direct aim at the pickets and fired to kill. Physical safety of police was at no time endangered.” Yet again, no officer was arrested.

In more recent times — only 20 years ago — the police of Charleston, South Carolina, baton charged picketing longshoremen, arrested the majority Black union leadership, and threatened them with up to ten years in prison. The video is shocking with the sheer amount of repression against striking workers. Only a sustained international movement was able to defend the Charleston Five from years of prison time.

As recently as 2011, when police were fraternizing with demonstrators in Madison, police and longshoremen of the ILWU battled it out in Longview, Washington. The police not only brought in turreted armored cars and armored boats, they also took to arresting union leaders about town and not even at the picket lines.

These are just some examples of the real history between police and union workers. Knowing this, shouldn’t we be fighting alongside our Black sisters, brothers, and siblings who are being murdered in the streets by the armed thugs of the state?

As a final example: Philando Castile, a Teamster brother, was shot and killed in front of his girlfriend and daughter by a cop who had pulled him over. This murder was livestreamed on Facebook for all to see. Yet the murderer was acquitted of all charges. The best the Teamsters could do was write a letter. They never mobilized their membership into any kind of action, and how could they when they organize police into their affiliated Teamsters Law Enforcement League?

After all of these murders, the least we could do is fight to kick the police out of the union movement. Beyond that, we should be organizing within our unions to take a lead in the struggle against police violence. We can stop racist terror with mass workers’ actions like strikes, but only if we organize to do that.