“The Day After Tomorrow” Is Here. Mass Flooding in NYC

If you’ve ever seen the apocalyptic film The Day After Tomorrow about an enormous “superstorm” which sets off catastrophic natural disasters throughout the world and results in a modern day ice age, you’re familiar with the terrifying images of flooded New York city streets filled with floating trucks and cars and horrified New Yorkers clamoring […] 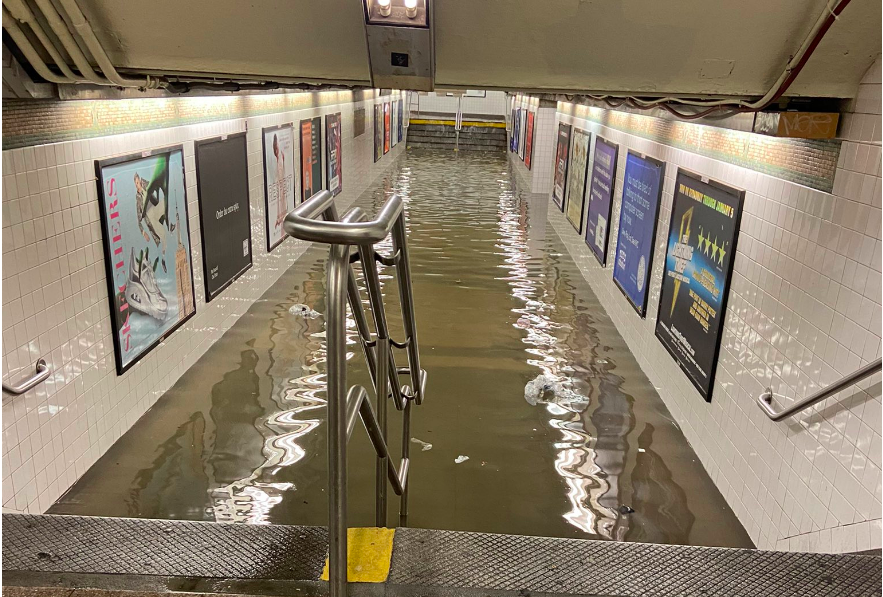 If you’ve ever seen the apocalyptic film The Day After Tomorrow about an enormous “superstorm” which sets off catastrophic natural disasters throughout the world and results in a modern day ice age, you’re familiar with the terrifying images of flooded New York city streets filled with floating trucks and cars and horrified New Yorkers clamoring to find appropriate shelter. Today, as New York City faces the after effects of Hurricane Ida, these types of scenes are no longer relegated just to the movies. They are real life and they are affecting the working class of New York in a dramatic way.

Across the city subway stations have been destroyed, commuters have been evacuated from their trains, cars have been seen floating down the sidewalks, and building pipes and plumbing systems have burst and exploded, flooding people’s homes. The National Weather Service estimates that 3.15 inches of rain fell in New York City andparts of  New Jersey from 8:51 p.m. to 9:51 p.m. In an historic move, the MTA announced that all subway lines have been suspended due to the flooding, leaving workers and other New Yorkers stranded for the night.

But none of this comes as a surprise. The subway has been in disrepair for decades and the budget continues to get gutted year after year. Meanwhile, the MTA spent 250 million dollars to add 500 more cops to arbitrarily patrol the subways as opposed to actually fixing the crumbling infrastructure.

This summer has seen disastrous climate events around the world unlike any other year. Massive wildfires erupted on the West Coast, as well as in countries like Greece and Turkey. Flash flooding devastated parts of Germany, China, and even New York earlier this summer. Much of New Orleans remains without power as it continues to reel from Hurricane Ida.

The flooding in NYC is just a taste of the devastation that climate change will continue to bring to the city and the world and it’s clear that the city isn’t ready for what is to come. Capitalism and it’s insatiable thirst for profits has demolished infrastructure and decimated the environment.

These are the effects.