The Fires in the Amazon Were Set on Purpose

Brazil’s National Institute for Space Research (INPE) reported a record total of 72,843 fires this year, an 80 percent increase compared to 2018. Almost 10,000 of those fires were spotted in the last week. These fires were set on purpose and Bolsonaro is to blame. 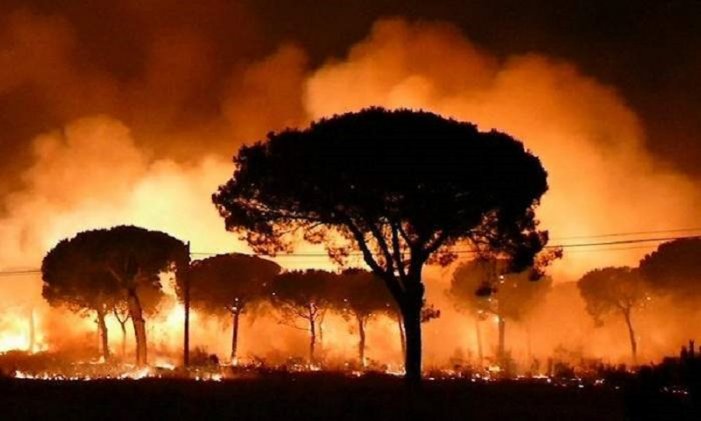 For the past week, one of the world’s largest and most precious forests, the Amazon, has been burning at record rates. Though deforestation-driven fires have increased exponentially since the election of Jair Bolsonaro, little attention has been brought to this crisis by bourgeois media outlets until a few days ago when smoke began covering major Brazilian cities.

São Paulo, the Western Hemisphere’s largest city, is currently covered in so much smoke from the fires that the city was covered in a blanket of darkness in the middle of the day. As Esquerda Diario reports:

According to weather sites, dusk was expected at 7pm in the city of Sao Paulo, but by 3pm the city was already so dark that at various points the lights that automatically turn on the streetlights were already on. And not only in São Paulo, other cities in the interior of the state also record this ‘phenomenon,’ generating various posts on social networks about what happened.

CNN gets it half correct. They say, “Blame humans for starting the Amazon fires, environmentalists say.” They are right, these fires were set on purpose. But it’s not all humans who are to blame: it is the humans in the capitalist class. And the Bolsonaro administration is criminalizing another set of humans: the indigenous people whose lands have been encroached on.

?Just a little alert to the world: the sky randomly turned dark today in São Paulo, and meteorologists believe it’s smoke from the fires burning *thousands* of kilometers away, in Rondônia or Paraguay. Imagine how much has to be burning to create that much smoke(!). SOS? pic.twitter.com/P1DrCzQO6x

Bolsonaro Is to Blame

These are fires set as part of deforestation project, supported by Bolsonaro’s government. They are part of the Brazilian agribusiness thirst for profits, setting fires to open land for soy production and logging. In fact, loggers were organizing “fire days” to take advantage of loosened regulations. This is part of Bolsonaro’s project from Brazil: destroying the Amazon rainforest to maintain massive profits for agribusiness while criminalizing dissent, particularly by indigenous activists.

Scientists warn that this could be the tipping point for an ecosystem that plays a key role in reducing pollutant levels in the atmosphere. This “lung of the world” accounts for more than half of the world’s remaining rainforest.

Already in Brazil we are seeing the potentially catastrophic health impact of increased pollution induced by a mismanaged forest. Official data from the Ministry of Health show that deaths from cardiorespiratory problems have increased by 14% in the last 10 years, due to air pollution.

While Bolsanaro and his government blame nonprofits for staging the fires, it’s clear that Bolsanaro’s weakening of environmental policy is to blame. The Brazilian environmental agency has drastically cut penalties for breaking environmental laws, with statements that essentially provide carte blanche for loggers to do what they will. The mining and farming industries are enormous sources of revenue in Brazil and are rapidly expanding in previously protected areas.

The head of Brazil’s space agency was fired due to a controversy about satellite data that showed alarming rates of deforestation in the past few months: up 88% in June compared with 2018, and up 68% in the first half of July compared to all of July 2018.

Agribusiness was an important sector of the coalition that brought Bolsonaro to power, and he has not disappointed this sector of his base. His environment minister, Ricardo Salles, has been accused of environmental crimes, and of legalizing the use of potentially carcinogenic pesticides (several of which are banned in other countries). He amended the Forest Law, claiming to cut through the bureaucracy to allow licenses to clear the rainforest. And he has targeted the Brazilian environmental enforcement agency with $23 million in budget cuts.

In the meantime, indigenous groups that are fighting for their lands and against the destruction of the environment are increasingly criminalized. On July 23, for example, an indigenous tribal leader was murdered, with the UN characterizing the murder as “a symptom of the growing problem of encroachment on indigenous land—especially forests—by miners, loggers, and farmers in Brazil.

The Brazilian group Movement of Revolutionary Workers said in a declaration,

The phenomenon is a direct result of each of Bolsonaro’s incentives to deforestation and his actions to make the environmental code more flexible, allowing the rural capitalists who, incited by the president, make the Amazon burn in flames, increasing their large massive estates throughout the region. It is the result of the policies of all previous Brazilian leaders including Lula and Dilma, who gave billions to agribusiness, that sought more land for pasture and for soy.

The trail of fire visible from space is a result of the expansion of agribusiness, leaving a trail of the indigenous peoples’ blood, as well as decimating the native fauna and flora. The zones and conflict over land are growing, while Bolsonaro encourages rural capitalists to respond with violence to indigenous activists, criminalizes the movements that fight for agrarian reform, calling the Landless Movement [MST] a “terrorist organization”, and discussing loosening gun-contol in the countryside, in order to increase the assassination of leaders of the movement for land.

Célia, a member of the Pataxó indigenous community, said in a video that went viral, “Look what they’ve done to our reservation. For two years we’ve been fighting to preserve this land, and now those troublemakers come here and set fire to our village. As if that were not enough, the Vale mining company kills our river, our people, our source of life, and now they’ve come and set fire to our reservation. We won’t stay quiet! Tomorrow we will close the road, and we want the media to defend us!”

Imperialist Profit from the Destruction of the Amazon

The attacks from the Bolsonaro administration are an extension of the climate denial of the global right wing, led by Donald Trump and his administration: a right wing that wants to break even the most tepid climate agreements in order to expand the profits of Brazilian and U.S. based agribusiness. But it wasn’t just the right wing who created these conditions: even the Workers’ Party made coalitions with agribusiness, financing their expansion and access to land in the Amazon.

As Brazil continues an economic downward spiral in the context of the global capitalist crisis and trade wars, the hyper-exploitation of the Amazon becomes increasingly central. The MRT statement reads: “Within the context of trade war and fierce nationalist competition between countries, the comparative advantage of the Brazilian bourgeoisie lies in the high productivity rate of the countryside, which it seeks to expand and hyper-exploit. In this context, the Amazon rainforest, a unique heritage of the world’s biodiversity, becomes yet another more intense stage for disputes over capitalist geopolitical interests.”

The policies being put in place are entirely in the interest of global capitalism. Agribusiness in Brazil is entirely dominated by imperialist traders who dominate the distribution of transgenic seeds, pesticides, fertilizers, silos, and logistics. The four traders who dominate the country are not Brazilian: two come from the United States, one from France, and one is Dutch. These four companies alone hold 80% of the soy trade in Mato Grosso but face growing competition from Chinese and Japanese companies. Even the supposedly “environmentally friendly” Norwegian capitalism profits from the Brazilian devastation; the largest fertilizer company in the world—the Norwegian, state-owned Yara—has more than 25% of its world turnover in Brazilian agribusiness.

So although some countries attempt to position themselves as environmentally friendly, the entire capitalist class is invested in and profiting from this environmental destruction. #PrayForTheAmazon began trending around the world as the horrific images of the Amazon in flames emerged. But prayers won’t confront the rise of the right or the capitalist greed that is destroying the Amazon and threatening the whole world with impending climate catastrophe.

We need mass mobilizations around the world to defend the Amazon, to defend indigenous lands, and to defeat the right-wing climate deniers. But we need more than this: There is no such thing as green capitalism, and we need to organize against the system that is threatening all life on earth.

According to the MRT’s statement,

The current stage of capitalist development demonstrates the conflict between the accumulation process of capital and the construction of sustainable alternatives. But modern capitalism also opens up the technological possibilities and the social subject, the workers, who can overcome this system. Technological development is in the service of predatory use of resources and environmental destruction. Competition among nations transforms environmental discourse into demagogy so that developed nations, at the same time the world’s major polluters, blackmail the growth of developing countries with goals of sustainability.

The transformation of this reality necessitates a radical change of the society in which we live. There is no possible historical conciliation between profit-oriented production, whose inexorable dynamic is the accumulation of capital, and anything similar to the rational and environmentally correct use of natural resources. Only the organization of a society emancipated from the clutches of capital and, therefore, a society based on the freely associated producers will be able to overcome the predatory exploitation of nature, the environmental crisis, and the social misery to which we are subjected.