With the giant container ship MV Ever Given blocking the passage of ships through the Suez Canal, capitalists around the world are scrambling to figure out how to deal with yet another blow to their global supply chains that have been hard hit by the coronavirus pandemic. 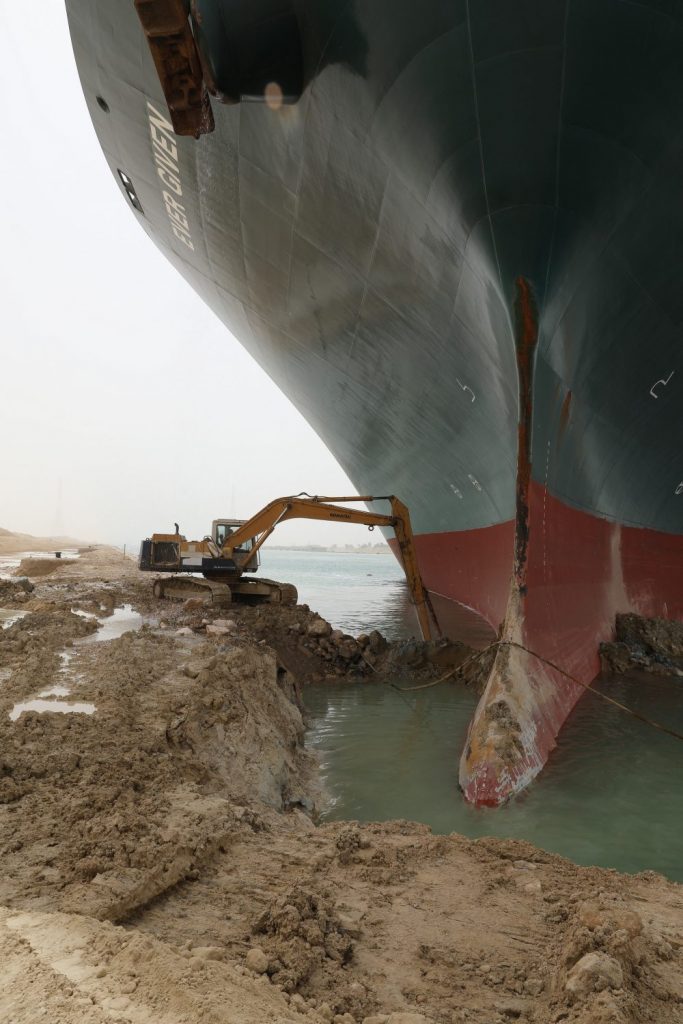 You’ve likely seen the memes: what appears as a tiny bulldozer at water’s edge, moving the earth in an effort to dislodge a giant container ship. It has come to represent everything from taking a daily walk in a coronavirus-riddled world to the effort required in the struggle to complete a PhD dissertation.

But for global capitalism, there’s no joke.

One of the world’s largest container ships, the Taiwan-owned MV Ever Given (Evergreen) has lodged itself sideways in the narrow waterway of Egypt’s Suez Canal after running aground when a gust of wind blew it off course on Tuesday, March 23. The ship is longer than four football fields, almost as long as New York City’s Empire State Building is tall. The nearly quarter-of-a-mile-long, 247,000-ton ship is blocking the southern entrance to the canal from the Red Sea, bringing marine traffic to a standstill along one of the busiest trade routes on the planet.

As dredgers, heavy earth-moving equipment, and tugboats work around the clock to free the ship, salvage experts are warning that it could be weeks before traffic can resume again. That is likely the truth, despite the Egyptian president’s advisor on seaports — who also happens to be the former chairman of the Suez Canal Authority (SCA) — telling Agence France Presse on Thursday that navigation through the canal “will resume again within 48–72 hours, maximum.”

The SCA’s pronouncements seem to be little more than wishful thinking. On Wednesday, the agency allowed 13 ships to enter the canal’s northern end from the Mediterranean Sea, but they made it only as far as a mid-canal lake where they have just been “idling.”

What looms for global capitalism is to be forced to reroute cargo ships around the southern tip of Africa, which would be a devastating blow to global supply networks that have already taken a huge hit from Covid-19. Going through the Suez Canal saves nearly nine days of travel from Singapore to Rotterdam, for example, shaving off some 6,000 kilometers of travel. By contrast, a trip through the canal takes about six hours.

Beyond the obvious costs, the environmental impact is significant. The canal route cuts carbon dioxide emissions by nearly half.

Nearly a third of the world’s shipping container freight on any given day passes through the Suez Canal, which is about 12 percent of the total goods traded globally by volume, according to Reuters. The shutdown has an acute effect on Egypt, which counts on canal traffic for much of its hard currency — some $5.6 billion in 2020, even with the generalized slowdown of global trade due to Covid-19.

The blockage of the Suez Canal — which is holding up about $9.6 billion in goods every day and costing an estimated $400 million per hour — is exacerbating the crisis of capitalism. It has caused crude oil prices to jump — more than 10 percent of the world’s crude oil passes through the canal — and is expected to force major price increases on just about everything that typically makes its way between Asia and Europe, regardless of the direction the goods are headed.

This could not have come at a worse time for the capitalists. As the Financial Times explains, the accident “has drawn attention to the inherent fragility of tightly stretched global supply chains at the very moment when they are already being buffeted by a pandemic and in an era when the philosophical underpinnings of global trade are being challenged. The strains created by Covid-19 … have exposed problems in the global trading system. Those difficulties could plausibly push governments and businesses alike to rethink a just-in-time supply-chain model that has arguably wrung efficiencies from the system at the cost of resilience.”

The pandemic, the article continues, “was already exposing vulnerabilities in global supply chains. Container shipping rates have more than tripled as companies that control shipping lines took out capacity in expectation of falling demand. Now it costs about $4,000 to ship a 40-ft container between east Asia and the U.S. west coast, up from $1,500 at the start of 2020.”

That’s extra money the capitalists do not want to be spending — even with goods moving. To expend such resources so ships can sit idly in the Suez Canal does nothing to help expand the field of profit-making and exploitation global capitalism desperately needs to sustain itself. But, as one supply chain consultant put it, such situations seem unavoidable: “The industry’s supply chain is several miles long, but only an eighth of an inch deep.”

Stuck in the muck, desperately trying to dig out of a crisis — it’s a metaphor for capitalism, especially since the start of the Great Recession in 2008. When the ship will be freed is anyone’s guess. The one thing we can be certain of is that whatever that costs the capitalists, they will find a way for you and me to pay the price.