Fernando Rosso, director of La Izquierda Diario, on the challenges of a leftist news portal. It’s been 25 years since a left party in Argentina last attempted to introduce a general-interest newspaper with big aspirations, but it seems the Socialist Workers’ Party (PTS) is giving it another shot. 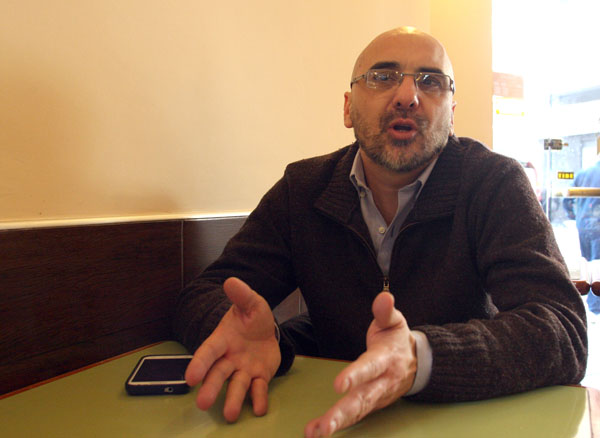 Over the last few weeks, the La Izquierda Diario news portal has published a number of colourful and thought-provoking interviews with some of the country’s top media editors, provoking a large, surprising reaction from readers. The “mastermind” behind the move was journalist Fernando Rosso, the head of a 20-strong newsroom staff.

Sitting in a café just metres away from the National Congress, Rosso talked to the Herald about the renewed challenge of going after the masses in the era of Twitter, Facebook and Google.

When did you decide to set up a media outlet aimed at a broader audience?

I guess it’s part of the Left’s political growth over the last few years. One of the reasons behind the decision was our goal of not having to depend on electoral campaigns for visibility — we try to keep a voice of our own that goes beyond the structure of elections. The final aim is to carry the ideological fight to expand our audiences. (Vladimir) Lenin once called for the launch of a nationwide newspaper as a way of adopting the most advanced technological expression of the time — well, now that would be the Internet and social networks. Our weekly print newspaper used to have 3,000 subscribers, and now we’re getting 90,000 visits to our webpage. Besides that, we now have lots of spontaneous correspondents.

How do you combine these ‘spontaneous’ posts with a certain level of professionalism?

We had to learn how to do that. We’ve searched for professional advice to better manage our social networks, we’ve offered training courses for journalists… our level has improved. There’s a whole section within the newsroom working to give a journalistic feel to stories we receive from factories and other workplaces. We strive for quality.

What experiences can be drawn from the stories of other left-wing newspapers aimed at broad audiences? I’m thinking, for instance, of the Noticias newspaper in the 1970s, the La Voz daily or the Communist Party-sponsored Nuevo Sur newspaper published between 1989 and 1990.

We know about these experiences. They have things in common with what we want to do, such as this more journalistic-oriented form of news coverage. But there are also differences.

This is a completely different era. I recall (lawyer Manuel) Gaggero talking about the problems he had with a similar case, that of the El Mundo daily run by the PRT-ERP (NB: a party from the revolutionary left-wing in the 1970s), the large staff needed to produce the newspaper, the technical problems they would have… now, with social networks, we’re getting spontaneous reports from people all over the country, so journalists in a way feel more accompanied. We’re now publishing some 2,000 news stories a month, but our goal is to increase that figure to 3,000. We want to engage in dialogue with the country’s largest newspapers, hence our section “Dialogues on the Argentine transition” which includes interviews with (La Nación columnist Carlos) Pagni, (Página/12 columnist Horacio) Verbitsky and (Clarín columnist) Julio Blanck. We want to hear what they have to say about the Left and pose them questions the Left wants to know about. So our ultimate goal is to avoid being “underground” but to do something above it, more visible.

How generalist do you want your news coverage to be?

I know Sports and Arts are not our strongest sections, but we sure want to expand sections such as Science, Technology, Society… gender issues are also important for us, to deal with them from a leftist point of view.

How much of the online content gets to the print edition?

Our print edition comes out on a weekly basis and is specifically targeted at the working class, at factories. We have two separate newsrooms.

We have a permanent staff of 20, including those managing our social networks. Now that we implemented a three-shift rhythm we have extra volunteers from the party helping out.

Are there any paid positions within La Izquierda Diario?

Yes, some 10, 12 people. All the rest is volunteer labour — otherwise it would be unsustainable.

Where do you get ideas for sections? Do you “steal” ideas from commercial media outlets in order to make the site more attractive to readers?

For the series of interviews we got the idea from La Nación’s “Conversaciones” section but also from the lengthy interviews published in Crisis magazine. We liked this idea of getting the “staunch” Left to talk with right-wing editorialists while at the same time, trying to find a journalistic balance to make it attractive. We keep an eye on what big media outlets are doing — they might use that for their political and commercial interests, but we don’t want to stay out of it claiming it’s a “bourgeois” tactic… we need to use all available tools.

We need to make a political analysis here. On one hand, a good part of the media system set up by Kirchnerism fell to pieces after it stopped receiving government advertising. On the other, in order to fight the Macri government we’ve joined the mobilizations that the dominant media characterized as “the pot-banging protests by Kirchnerites and leftists,” in attempts to play down the event’s importance. Kirchnerites are experiencing a crisis of political representation because Peronism is shifting towards the right — including the clear attempts by leaders such as (Florencio) Randazzo, (Sergio) Massa and (Diego) Bossio to become “moderate” Peronists — and Kirchnerism is losing power due to its role in corruption cases. Disenchanted Kirchnerites may find consistent ideas on the Left.

What do Workers’ Party (PO) leaders, your allies in the Workers’ Leftist Front (FIT), think of your open approach to media?

When I see the PO I see political conservatism, they’re still publishing their weekly and only slowly beginning to renew their webpage. I read a column by (PO leader Jorge) Altamira and some comments by PO activists saying La Izquierda Diario was a general interest newspaper that gives a voice to Kirchnerites. Well, our slogan during the last elections — where (presidential candidate) Nicolás del Caño beat Altamira in the front’s primary — was a call to “renew and strengthen the Workers’ Leftist Front.” A leftist party resisting renewal is a contradiction in terms. When we began this project everyone said we wouldn’t be able to cope with the daily routine and that the project would die soon, but we made it through and now many people are adding it to their daily routine, it now ranks among the news portals they check every day. Today, the vanguard thing to do is to go online, not to insist on a print newspaper at a time when all workers have Facebook or have joined WhatsApp groups.

Have you got any plans oto translate news stories from abroad into Spanish?

We haven’t been able to do so so far, but it would be a tremendous service for the left wing in Argentina. We’re discussing, for instance, the possibility of translating pieces from the (political academic journal) New Left Review.

What is the outlook for the Left in the 2017 elections?

Two things to bear in mind. One: they’re midterm elections, which means the voter “feels” he or she is more free to vote whoever he or she wants and that the left usually fares better in this kind of legislative elections. Two: Kirchnerism is going through a deep crisis. Save that they come up with a new political party that defends the ideals promoted by Kirchnerism, we’ll be dealing with a whole set of people who in the past sympathized with the Victory Front (FpV) and now want to vote for the left. We have good chances of getting national lawmakers elected in the city of Buenos Aires, Buenos Aires province, Córdoba and Mendoza.