Today the NYC City Council full of Democrats voted funding for the NYPD and attacks on the working class and oppressed. 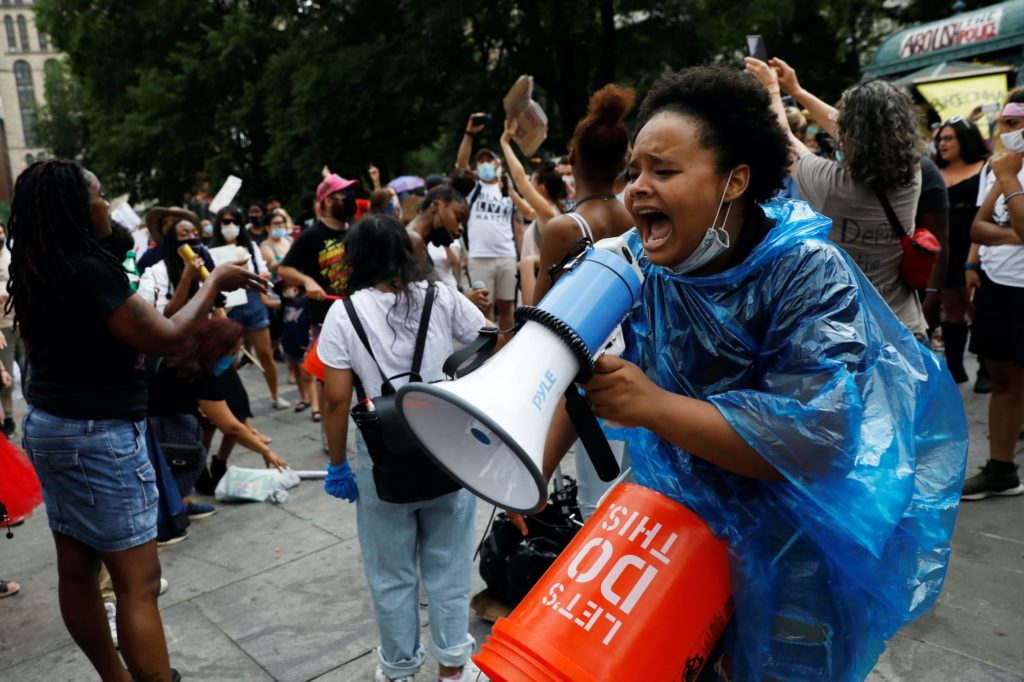 Tonight, the nearly entirely Democratic New York City Council voted on a budget that continues to fully fund the NYPD. Furthermore, the budget is an attack on the working class and implements austerity, which will inevitably lead to layoffs. The City Council members paid lip service to Black Lives Matter, pretending to be on the side of the movement, while voting for cops to continue to terrorize the Black community. Some Black members of City Council used the worst identity politics to demand that protesters “check their privilege” and accept their yes votes to this disgusting budget.

The City Council was under pressure from the thousands of people camping in front of City Hall— but even that was not enough to deter them. The occupation was called by a nonprofit, VOCAL-NY, demanding a 1 billion dollar (17.8%) cut to the police budget. However, those at the occupation are demanding much more than 1 billion: many are demanding to defund to 0, while others such as the DSA are demanding a 50% cut to the budget with a goal of eventual abolition.

Despite the empty rhetoric, we should make no mistake, the budget that the City Council voted does not defund the police by 1 billion dollars, no matter what DeBlasio says. It maintains New York as the city with the country’s largest police budget. And it is an austerity budget, with deep attacks on the working class. It is important to note that these are Democrats voting the budget. The final tally was 32-17. There are only three Republicans on the City Council.

Is City Council Defunding the NYPD By $1 Billion?

In short, no. The City Council is funding the racist killing machine known as the NYPD.

Almost half of these “cuts” are achieved by moving certain costs — such as school safety officers, traffic enforcement, and homelessness “outreach” — out of the NYPD budget and under the purview of other city agencies. In terms of real cuts to NYPD activity, not just costs moved to other departments, DeBlasio and the City Council are voting on a cut that only amounts to $382 million compared to fiscal year 2020 — not even a 7% budget decrease. While the other agencies will no longer be paying money into the NYPD for these services, NYC will still have school security officers, traffic enforcement, and “quality of life” programs that criminalize homelessness. They will instead just be administered by different departments. The New York Times calls this “a budgetary sleight of hand.”

In DeBlasio’s televised announcement of the budget, he cited “approximately $430 million in cuts” when discussing “NYPD reinvestments.” Based on the documents issued by the City Council, this “approximately $430 million” is actually $422 million in cuts compared to DeBlasio’s previous NYPD budget for 2021, not compared to the 2020 budget. The city budget process always includes three formal versions of the budget: the preliminary budget (created by the Mayor’s office), the executive budget (a revised version after receiving feedback from City Council), and the adopted budget (the version that actually goes into effect). Essentially, DeBlasio proposed a slight budget increase for the NYPD ($5.644 billion) in the executive budget proposal (see page 2), and now expects credit for “cutting” the NYPD by agreeing to reduce the earlier, never-implemented number.

DeBlasio’s “$1 billion” comes from that $430 million, which misrepresents the nature of the “cuts,” and a pledged shift of $537 million in capital funds from the NYPD to NYCHA youth programming and Broadband service. However, the city council notes in their executive budget summary report that due to delays caused by the coronavirus, the NYPD has only spent about 44% of their capital budget for 2020 and is unlikely to be able to spend all of their capital funds for 2021 either. So, even if these youth programs and Broadband upgrades do manifest, it is unlikely that New York City’s youth and public housing residents will see the benefits for a long time. Furthermore, regardless of these specific investments, DeBlasio’s executive budget proposed $2.3 billion in cuts to capital spending over the next 4 years, including delaying financing for 20,000 affordable housing units and repairs to roads and bridges.

On top of that, in his press conference on the matter, DeBlasio implied that the construction of the new 116th Precinct was being put on hold in response to demands to reinvest NYPD funds into youth services. However, the Council’s executive budget summary report (see page 9), dated May 14, 2020, states that the project was already on hold due to Covid-19 and that these funds were already likely to be rolled over into 2022.

Lastly, the budget for fiscal year 2020 (see the bottom of page 72E) reveals in a footnote that the actual amount of money spent on the NYPD this year is not $5.606 billion at all, but $10.9 billion. This is because fringe benefits, pensions, and debt service paid to the NYPD come from other corresponding areas of the budget, even though the money is still spent on police.

Even if Mayor DeBlasio was accurately representing the cuts included in the budget adopted tonight — which again, to be clear, he is not —  even a $1 billion cut would still be shockingly marginal (only 9.2% of the total expense budget paid to the NYPD) when these additional funds are included.

When announcing this insulting budget, Mayor DeBlasio made sure to compliment the murderous police force:  “The NYPD did a hell a good job in saying, ’Ok, here’s a bunch of things we could do while still keeping this city safe.”

The budget proposed was very clearly an austerity budget, including “drastic cuts to city services,” as the New York Times puts it. And many of us have already been feeling this austerity — after all, CUNY is already making mass layoffs.

The budget that was voted includes cutting almost a billion dollars from schools. It also includes cuts a composting program, closing city pools over the summer, and reducing trash pickup and tree stump removal services. Worse still, the budget comes along with possible — or even likely —  layoffs and other attacks on the working class. DeBlasio’s spokesperson argues that there needs to be  “$1 billion in labor savings or face 22,000 layoffs, unless the federal government comes through with aid or the state grants the city borrowing authority.” Additionally, 9,000 more jobs may be cut and workers may be forced to pay more for healthcare.

Furthermore, while the Health and Hospitals Corporation is receiving a nearly 50% increase in funding compared to last year, the new budget provides no additional funding to the Department of Health and Mental Hygiene. In fact, the department will face a slight cut compared to the current fiscal year ($2 million). While the cut is small, all healthcare services ought to be receiving significantly more funding during this time, not less. There are many important healthcare services aside from hospitals, including mental health clinics, substance abuse programs, and public health programs. Most significantly, the Department of Health and Mental Hygiene oversees the city’s Disease Control and Epidemiology units. Under this budget, those programs are also defunded.

The City Council argued that these austerity measures were necessary because of the deficit created by the coronavirus. But that’s bullshit — if austerity measures were truly necessary, they would also apply to the NYPD. And further, they refuse to increase taxes on the mega rich who live and hyper exploit workers in New York City. While Jeff Bezos is becoming a trillionaire and firing workers for organizing here in New York City, the City Council pretends that there is no money.

This was a pro-austerity, anti-Black, and anti-worker budget. And tonight, it was voted on by the Democrats in City Council. We should be horrified. We should be enraged. And we should take action.

First and foremost, it is high time for us to break with the Democratic Party that tear gasses, represses, and votes for austerity budgets. They clearly represent the cops and capital, not the working class and oppressed.

Now is the time to unite and shut down the city, with protests and strikes against this austerity budget, against all attacks on the working class and oppressed, and against racist police violence. We won’t accept this budget. We aren’t going home. No Justice, No Peace.