The NYC Hometown Heroes Parade Does Not Represent Essential Workers

The parade ignores the fact that many of the essential workers lauded as “heroes” with this parade worked throughout the pandemic without adequate resources, adequate pay, adequate protections, and adequate staffing. 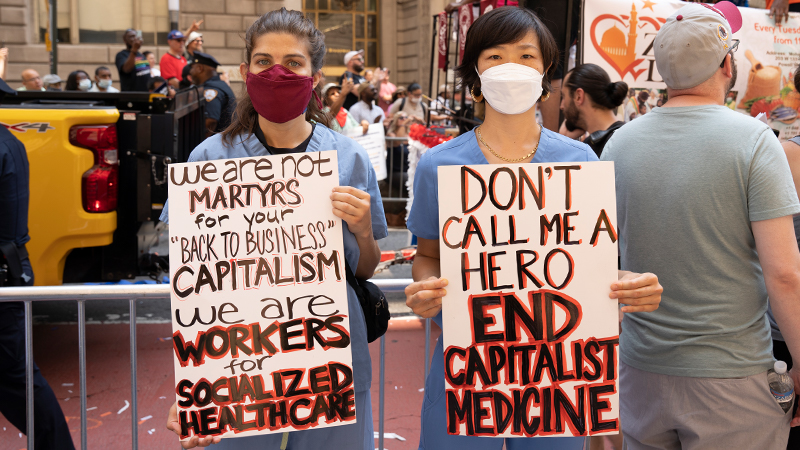 When New York City Mayor Bill de Blasio announced the Hometown Heroes Parade, the city’s first ticker-tape parade since the onset of the Covid-19 pandemic, we as healthcare workers could see through it immediately — as a disingenuous attempt to glorify us in order to celebrate a return to capitalist business as usual and rewrite the failures of the Democratic establishment during the peak of the pandemic.

The parade ignores the fact that many of the essential workers lauded as “heroes” with this parade — from grocery workers to nurses — worked throughout the pandemic without adequate resources, adequate pay, adequate protections and adequate staffing. We still lack that support today. Without rent relief and universal healthcare, many of us had no choice but to work in order to put food on the table and keep a roof over our heads, each day risking that we would bring Covid-19 home to our families. As we clock in to our work shifts today, many of us still pass by photocopied photos of our coworkers who died from coronavirus. Many of us still have health complications from Covid-19. Many of us lost family members.

The parade, which took place today in downtown Manhattan, was a “who’s who” of corporate entities that profited off the pandemic, such as Walgreens and Pfizer, and union bureaucrats who have only mobilized the pandemic for nominal gains, such as the new “safe staffing” legislation that allows individual hospitals to define what constitutes “safe” nurse-to-patient ratios.

New York City’s firefighters boycotted the parade, noting that the city is celebrating the “end” of the pandemic at the very moment one of their union members is in a hospital intensive care unit with Covid-19 pneumonia. The city’s two largest EMS unions also boycotted the parade, citing that they’ve been working without a contract for three years and didn’t receive a penny of hazard pay during the pandemic. New EMTs in New York City are paid just over $35,000 a year, barely more than the poverty threshold for a family of four. Some union members were seen on the sidelines of the parade carrying signs demanding, “Pay EMS.”

The Metropolitan Transit Authority was celebrated in the parade, but public transportation remains one of the most dangerous places to work in the city, and 156 transit workers have died from Covid-19 — some 17 since January 2021.

Day laborers, home health laborers, and grocery workers were celebrated, despite the fact that many work without health insurance and live in precarity, at constant risk of losing their homes. The many immigrant laborers without papers in these sectors have received no public assistance, forcing them to take dangerous jobs that put them at high risk of contracting the virus.

Public school teachers were celebrated, but of course with no mention of the teachers who demand smaller classroom sizes and more resources to rectify racial disparities for Black and Latino New York City students — disparities that were exacerbated by the pandemic.

To no one’s surprise, the parade also featured a police contingent, despite the fact that the NYPD ignored mask regulations themselves while violently enforcing city mask mandates in Black and Brown neighborhoods, arrested essential food distribution workers striking for a $1/hour raise in Hunts Point, arrested delivery workers for being out past curfew during the Floyd protests, and received new uniforms and equipment within days of the the protests breaking out in NYC. In contrast, healthcare workers languished with reused masks for the first month of the pandemic.

Hospital healthcare workers have received pittance for hazard pay and scant mental health support, while health insurance companies have doubled their profits. The pharmaceutical giant Pfizer, which was given a float in the parade, is forecast to make $26 billion this year from a vaccine developed with public money. There was no promised hazard pay or student loan forgiveness, only billboards and empty legislation and photo opportunities.

In New York City, as they lionize us healthcare workers , the powers-that-be have just completed the plan to close Kingsbrook Hospital, a plan that serves real estate and corporate healthcare interests while leaving a largely Black neighborhood with fewer hospital beds. In New York City, as they call us heroes, they have left all of us who lost family members without financial assistance, those of us who can no longer work due to the disabling long-term symptoms of Covid without options, and those of us who suffer from PTSD symptoms without sufficient mental health support, working in high-stress environments that no doubt have contributed to three suicides of resident physicians at Lincoln Hospital in the last seven months.

To the public that thanks us and supported us throughout this ongoing pandemic, we thank you. To the government officials of this city, we reject your platitudes that aim to rewrite history and make yourselves look good. We hate you.

Essential workers don’t need your parade. What we need are tangible improvements in our lives and working conditions. We need control over our own workplaces, so that our administrators and bosses and legislators cannot take advantage of us ever again. We need revolution.