The OAS in Bolivia: A Tool for US Imperialism

The Organization of American States supported the coup d’état in Bolivia. It’s no wonder. The OAS is a tool of US imperialism. 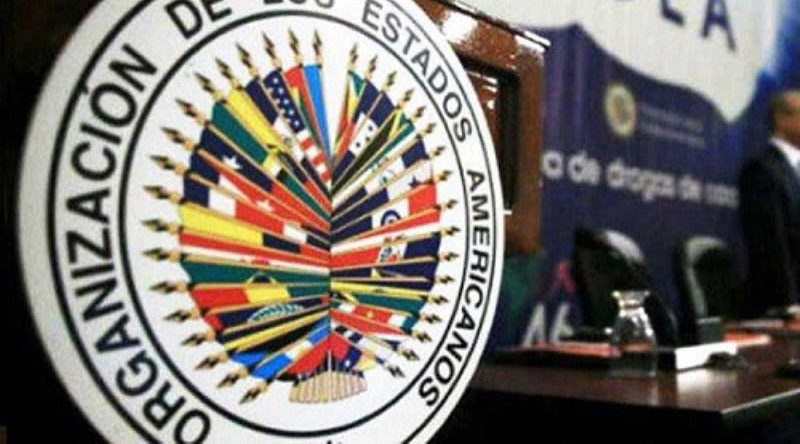 The Organization of American States (OAS), led by Luis Almagro, endorsed the coup that ousted Evo Morales on Sunday. Early Sunday morning, the institution issued a communiqué justifying the call for new elections and pointing out the “irregularities” in the electoral process of October 20. This came in the context of increasing right-wing mobilizations on the streets of Bolivia organized by the ultra-religious, anti-indigenous and homophobic right wing with the support of the Catholic Church and agro-business. It came after the police sided with the right-wing protesters and as indigenous people had already begun to be targeted. And the OAS provided another call to action for the coup plotters, accelerating the coup supported by the military and the police.

It is a lie that the OAS cares about “undemocratic” elections. The OAS, far from being an organization that guarantees the defense of democratic liberties and human rights, acts as a direct agent of the interests of imperialist capital and the government of Donald Trump.

It has continuously acted in the interests of U.S. imperialism. At the beginning of the year, while a coup attempt was underway in Venezuela—supported by right-wing regional governments, like those of Argentina’s Mauricio Macri and Brazil’s Jair Bolsonaro—the OAS openly supported Juan Guaidó, who was not democratically elected. Rather, he was selected by U.S. imperialism to oust Nicolás Maduro. In this sense, it is clear: The OAS doesn’t care about democracy when it comes to defending imperialist interests.

In the last month, the organization supported the government repression in Ecuador and Chile as well. On the other hand, the OAS did not denounce the brutal repression that President Lenín Moreno initiated on the protesters in Ecuador—repression that left hundreds dead, wounded or detained. Nor did it denounce the austerity and poverty that catalyzed the massive mobilizations.

The OAS did, however, find the time to blame the governments of Venezuela and Cuba for the mass demonstrations. In a statement, Almagro said that “the recent currents of destabilization of the hemisphere’s political systems have their origin in the strategy of the Bolivarian and Cuban dictatorships,” through what he called “exporting polarization and bad practices, to essentially finance, support and promote political and social conflict.” He claimed “the breezes of the Bolivarian regime driven by Madurismo and the Cuban regime bring violence, looting, destruction and a political purpose of directly attacking the democratic system and trying to force interruptions in constitutional mandates.”

The OAS sees the protests as conspiracies, not as rage as concrete material conditions. Almagro’s statement is absurd by any standard.

A Blind Eye to Repression

Twenty days ago the Chilean people rose up and said loud and clear: “Chile despertó” (Chile awakened). During these three weeks, workers, students, women and a large sector of the Chilean people took to the streets against the government of President Sebastián Piñera and the regime inherited from the Pinochet dictatorship.

From the beginning—some very minor concessions notwithstanding—Piñera’s response was repression and the violation of human rights. Denunciations of humiliation, sexual crimes, deaths and rampant repression have mounted.

During these weeks, however, the OAS did not condemn the repression, the detentions or the tortures. On the contrary, it remained noticeably silent in the face of enormous repression—repression that has resulted in more than 200 people going blind after being hit by police ammunition.

The double standard of the organization led by Almagro is clear. The repression of U.S.-friendly governments—however terrible they may be—are shown to be in the service of “democracy.”

The Coup in Bolivia

On Sunday, the political crisis in Bolivia advanced after the military asked for the resignation of Evo Morales. There are countless examples of that this is a right-wing coup: Luis Fernando Camacho, leader of the racist and xenophobic civic committee of Santa Cruz, Bible in hand speaking to the right-wing protests. Police ripping indigenous symbols off their uniforms. People burning the whipala flag. People destroying the residence of Evo Morales with a rhetoric of racial hatred.

The coup d’état was planned by Bolivian right-wing groups representing agribusiness and was executed by repressive forces with the mutiny of the police. Ultimately, the military was the last straw for Morales.

In this situation, the OAS once again showed its role and legalized the coup d’état. The OAS, with a hypocritical discourse, condemned the irregularities during the electoral process without saying a word about the ongoing military coup. Almagro tweeted congratulations to the OAS only a few hours after the ousting of Morales: “My congratulations to the @OEA_Official team that carried out the audit of the elections in Bolivia. They did an excellent job. #OEA in Bolivia #OEA complies”

As if there was any doubt left, U.S. Secretary of State Mike Pompeo on Saturday gave his support to the report of the audit of the elections in Bolivia, to which he gave his “total support to ensure the true democratic process.”

President Donald Trump declared that the resignation of Evo Morales was “a significant moment for democracy in the Western Hemisphere.” In addition, he stated that “the United States applauds the Bolivian people for demanding freedom and the Bolivian Army for protecting the Constitution,” and that “these events send a strong signal to the illegitimate regimes of Venezuela and Nicaragua.”

The OAS is not an impartial agency helping to establish the normal functioning of democratic rights in Latin America. Its role on the continent has been to endorse the plans of the U.S. government, to reaffirm its dominance in the region and to support puppets who are attentive to the interests of U.S. corporations. U.S. imperialism wants to impose a relation of forces in South America favorable to its interests in the region, but the masses are courageously resisting this offensive. And make no mistake, as the uprisings continue around Latin America, the OAS will consistently side with imperialism against the working class and oppressed.