What’s Behind the Popular Uprising in Chile?

The explosive unrest in the streets of Chile is the backlash against decades of the most extreme neoliberal policies. The political regime inherited from the military dictatorship is in deep crisis. 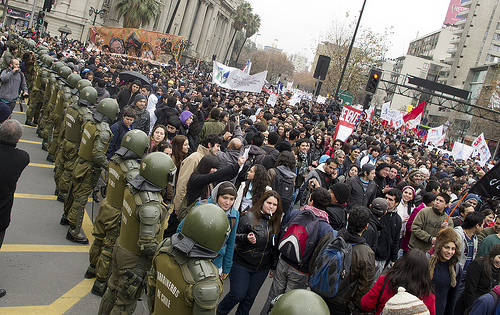 In the span of a week, everything turned upside down in Chile. On Monday, Oct 14 things looked like any other day in the Southern country. Three days later, in response to a price hike in the transportation fees, mass protests rocked Santiago and other big cities across the Chilean territory. Riot police cracked down on protesters, who in turn resisted the blows and fought back. President Sebastián Piñera declared a state of emergency and later established a curfew, but these measures were unable to contain the popular outburst. On Saturday, Piñera backtracked on the transportation fare hike, but protests continued unabated.

Over the weekend, there were lootings and mass protests defying the curfew in Santiago, Valparaiso, and other cities. The deployment of the military was widely repudiated because it is a painful reminder of Chile’s recent past: Pinochet’s 17-year-long dictatorship.

It is hard to believe that a hike in the price of subway rides could elicit such an explosive response. To be sure, the cost of transportation is higher in Chile than in any other country in the region (830 pesos, or 1.17 dollars). Furthermore, the price of other utilities has similarly increased in the past few months. The electricity bills, for example, have gone up 10.5% only this month.

But the underlying causes of such a massive and immediate popular response are to be found in the neoliberal economic policies over the past half century. Chile has been the “best student” of the neoliberal school. Beginning under Pinochet’s dictatorship, Chile was not only the first country to embrace neoliberalism (even before Thatcher and Reagan), but it has been the country that went the furthest in that direction in the whole Latin American region. In today’s Chile, market forces rule virtually all spheres of life: your education, your access to quality health care, and your capacity to collect a decent pension at retirement age depend squarely on your ability to pay.

This was not always the case. In the first half of the twentieth century, a growing urban working class in Chile, Argentina, and other countries fought for rights and public services addressing their needs. Social policies in Latin America never achieved the breadth and depth of the European counterparts, and Chile was no exception. Nevertheless, at the end of the Imports Substitution Industrialization (ISI) period (roughly, 1940-1970s), Chile was one of the five countries with the most generous welfare regimes in Latin America (together with Argentina, Brazil, Uruguay, and Costa Rica).

At the beginning of the 1970s, the left in Chile, like in other countries in the region, was strong enough to represent a threat to capitalism. In September 1973, Salvador Allende’s Popular Unity government was overthrown by a military coup—one of the many coups orchestrated by the CIA as part of the Operation Condor in South America. With the unconditional support of the U.S. government, Pinochet rose to power over the bodies of radical left militants.

Neoliberalism: Made in Chile, Designed in Chicago

The aspiration of the Chilean working class went beyond welfare capitalism. The dictatorship led by Pinochet made sure to squash not only the aspirations but the material forces of the left, in its path to implement the neoliberal policies that economists from the University of Chicago (the “Chicago boys”) were kind enough to lay out for him.

The publicly-run, pay-as-you-go pension system was fully privatized, forcing contributors to put their money in private Pension Funds Administrators (AFPs) and eliminating employers’ contributions. The transition was extremely expensive for the government, since the state continued paying pensions for retired beneficiaries while the inflow of funds rapidly dried out. The promise was that AFPs would manage funds more efficiently and, because they invested in the stock market, they would produce higher yields. The actual result was much lower benefits due to much higher overhead costs (including the profits reaped by AFP owners/stockholders). Although the pressure for reform has grown over the years, and Michel Bachelet’s government instituted some minor changes, the private pension system and AFPs primacy in it is still in place today.

Pinochet also decentralized education and turned teachers into municipal employees, which greatly weakened the unions and resulted in chronic underfunding, since federal funding was cut off. He also implemented a voucher system whereby public money could go to either municipal schools or private schools, resulting in a tiered system of public schools with declining funding and quality, and a burgeoning, heavily subsidized private school sector. Private universities were then allowed for the first time in Chile’s history, and both private and public universities started charging tuition. Today the costs of university in Chile is among the highest in the world, according to different estimates, only slightly less costly than in the U.S.

Just as in education and in social security, the health care sector underwent a dramatic conservative reform. The mainstay of Pinochet’s reform was the institution of a dual system, which still remains in place today: ISAPRES is the private sector providing high-quality health care to a younger, healthier, and higher-income population, while FONASA is the publicly run, underfunded, and low-quality health care system covering more than 80 percent of the population.

The Specter of Pinochet

The transition out of the dictatorship in Chile was “controlled,” in contrast with the Argentinian case, where mass mobilization precipitated the exit of the military junta and the call for elections. After leaving government in 1990, Pinochet still served as Commander in Chief of the armed forces until 1998, and he was then appointed “senator for life,” a position that he held until he was arrested in the UK for crimes against humanity committed during the dictatorship. He was arrested and released many times before his death in 2006.

Pinochet’s neoliberal reforms were not seriously challenged by any government that came after. Despite Chile being a member of the OECD, the level of income inequalities is as high as in Bolivia or Peru, and it has not improved much in the commodity boom of 2002-2013 that lifted all the economies in the region. The extreme commodification of health, education, and social security represents a pressure that pushes working-class people to the point where their survival is at risk, on a daily basis. The stress, insecurity, and sense of unfairness combined in a simmering tension that could only be contained for so long.

The social outrage and mass explosion of last week must be understood in this context—as an indictment of the political regime inherited from the military dictatorship that continually marginalizes, punishes, and oppresses the vast majority of its population. Neither the traditional center-left parties (Socialist and Communist parties) nor the new left (Frente Amplio) are leading the protests: these are largely spontaneous—and explosive. A number of buildings were set on fire over the weekend, confrontations with the police and the military are continuous, and barricades were built in several parts of the city. Press outlets report lootings in Santiago and other cities while “pots and pans” protests multiply.

A sign in one of the protests read: “They stole so much from us, they even stole our fear.” The return of military troops and tanks to the streets of Santiago signals a dangerous escalation of state repression. The unrepentant protests that continue to challenge the state of emergency and the curfew point to a crisis of legitimacy and a will to fight despite the threat of state violence. The social pact is broken. In Chile, as in several other countries, we are in the wake of a new period of class struggle.