The “Social Dilemma” of Capitalism in Decline

The Netflix documentary The Social Dilemma offers a jarring look at the addictive nature of social media. But its attempts to be “apolitical” make the film’s insights ultimately toothless. A socialist critique. 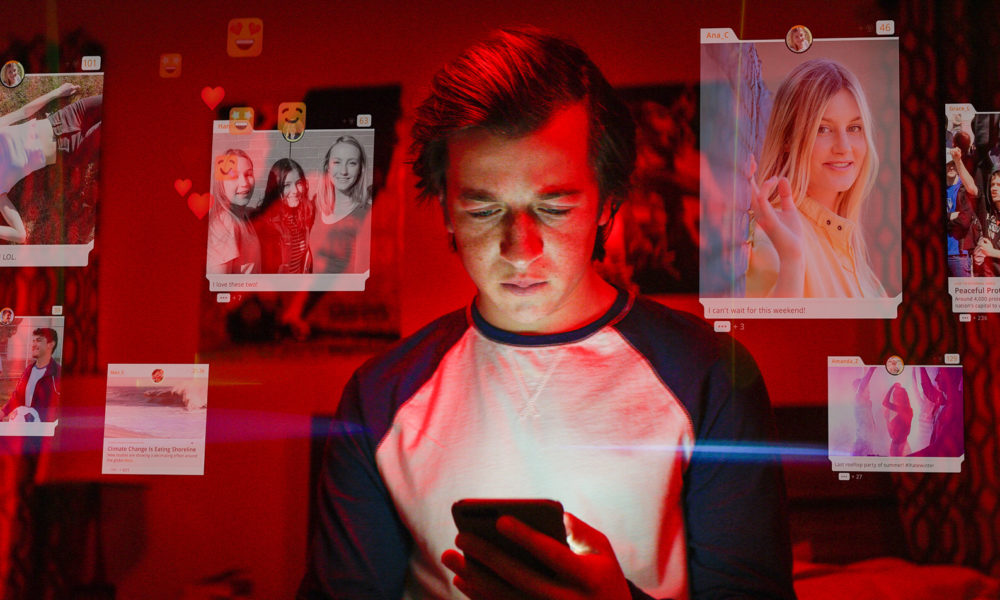 The Social Dilemma, which appeared last month on Netflix, does not contain a lot of surprises. It features critics of social media companies — like Tristan Harris, once an ethics officer at Google and unironically called the “conscience of Silicon Valley” — who have already been interviewed in countless liberal publications.

The documentary’s innovation is that it features fictional interludes. The algorithms that run your feed on Facebook or Instagram are portrayed as three uniformed agents standing at control panels like ensigns on a Star Trek bridge. Seeing tech personified like this gives us a feeling of just how nefarious the feed is. The actors give the algorithm a face: one that is clearly evil.

We know that every time we pull out our phone, we are served an endless supply of cat pictures and hot takes. Yet this content is not random. A supercomputer is learning, with billions of experiments per day, what to show us in order to maximize the time we spend with that particular app, and thus maximize the number of ads.

This machine learning system, with no understanding of human society, might have helped create flat earth theory or QAnon. Not that a computer was needed to come up with dumb ideas — but the algorithm determined, via endless trial and error, that these particular dumb ideas would glue a certain number of people to their screens if “recommended” to a mass audience.

Everyone is familiar with the addictive nature of social media — who can get through a screening of the film without at least a quick glance at their notifications? So it is fascinating to see the former head of Pinterest talking about his unsuccessful attempts to leave his phone out of the bedroom. The inventor of the “Like” button recognizes that, trying to spread joy in the world, he unleashed a monster.

Truly, the sorcerer’s apprentice has lost control of all those broomsticks!

Elsewhere in the film, experts explain what social media has done. A dramatic spike in depression, anxiety, and suicide among teenagers, for example, correlates fairly closely with the spread of social media to our phones around 2010.

But these same experts doggedly ignore any phenomena besides social media. Was 2010 not also during the period where a historic crisis of capitalism robbed young people of any sense of security about the future?

The film blames social media for “polarization” and “radicalization,” and this is illustrated with mini-snippets of protests. We see masked demonstrators waving signs or throwing molotov cocktails. The images are from the U.S., France, Hong Kong, and anywhere else. The demonstrators might be protesting against vaccines or for autonomy from the Chinese government or against social cuts — the filmmakers are telling us that all political conflict in today’s world is the result of social media.

One of the fictional interludes — featuring a protagonist who attends high school despite clearly being in his mid-20s — shows a young man getting drawn in by “extreme” content. We all know the possibilities: incels, the alt-right, or countless other right-wing movements recruit like this.

But the filmmakers want us to know that “extremism” exists independently of political content. The not-so-young man is thus attracted to a movement called the “Extreme Center”! The film shows images that supposedly could be from the Right or the Left. But looking carefully, we see the posts contain a socialist fist, a Black youtuber, and thoroughly left-wing aesthetics.

When the protagonist eventually joins an “extreme” demonstration, the multiethnic composition of the mob lets us know this can’t possibly be a right-wing rally. In other words, these “experts” on the dangers of social media are showing us the horror that a white “teenager” could get angry about racism and join a protest against police violence. Oh no!

This “apolitical” stance is shored up by politicians calling for civility. Which politicians have been chosen? Marco Rubio and Jeff Flake! Two champions of racism, imperialism, and neoliberalism in the most aristocratic body of the U.S. regime.

As absurd as it might sound, the film is arguing that any form of social conflict is caused by social media. They are just a step away from arguing that the U.S. Civil War could have been avoided had Abraham Lincoln not gotten embroiled in an epic Twitter battle with Jefferson Davis. Have they ever considered how the Civil Rights movement emerged? And more importantly: Do they think this kind of “unrest” was a bad thing?

Against its intentions, the film shows some of the wonders of technology. Social media undoubtedly played a role in a whole generation in the United States increasingly coming to understand that capitalism offered them no future, and that socialism would be a vastly superior social system. This is the kind of “extremism” that the film’s “ethical” capitalists are ultimately worried about.

They acknowledge that social media companies have no reason to put the brakes on this addictive technology, as the market demands that they increase profits every year. The solutions they propose — “regulation” in order to “realign fiscal incentives” — are comically inadequate for the scale of the problem they are describing.

There is in fact quite a simple “regulation” that could give humanity all the benefits of this amazing technology without the devious mechanisms designed to make people addicted. That is: public ownership under worker’s control. The users of social media — which is basically the same as all of humanity — need to decide democratically what happens on these platforms.

For years, Mark Zuckerberg decreed that Holocaust denial would be allowed on the virtual version of the public square. And then from one day to the next, he reversed this call. Why should a young gazillionaire be deciding on what kind of opinions are acceptable in public? In order to shuck his responsibilities, Zuck has said that Facebook shouldn’t be in the business of arbitrating truth. And in a sense, we agree with him here: Facebook needs to be in the public domain.

In other words, we need to nationalize the social media companies, and put them under the control of not only their workers, but the entire working population.

Will this stop “polarization” and “radicalization”? Well, the organic crisis that is engulfing bourgeois society is not some “technical” issue that can be solved by altering a few lines of code. Yes, social media companies are doubtlessly accelerating the spread of morbid symptoms of capitalism’s decline. But the crisis is ultimately a result of the ruling class’s inability to address the most urgent problems facing humanity. This is why they escape to ever-more-distant fantasies — as far as Mars! — as the planet burns and their “democracy” becomes increasingly clownish.

The demand to nationalize Facebook and the rest of Big Tech is not just a reform program. Rather, it is a step toward putting all of society’s wealth under the control of working people. This would not only give humanity control over the means of production — it would, as a pleasant side effect, also remove the social basis for the terrible ideas that spread across social media.