The Struggle for Justice in Cleveland Continues

Tamir Rice, Tanisha Anderson, Timothy Russell, and Malissa Williams, alongside countless others are the names currently on the minds of activists, students, and community members in Cleveland. Their fight against the abuses by the Cleveland Division of Police places them on one of the key fronts of a nationwide fight for justice. 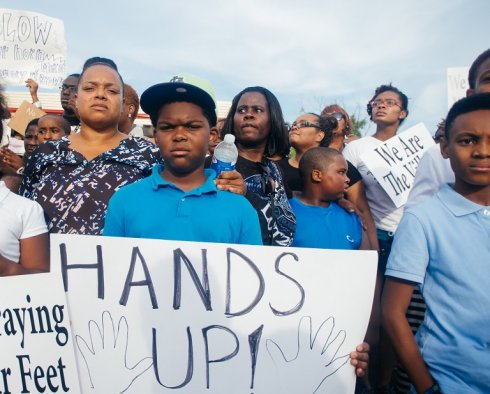 The campaign against these abuses by the CDP and inaction by the City of Cleveland has taken many forms. Two days after the shooting of Tamir Rice, around 200 activists and students gathered in Cleveland’s public square, eventually taking to the streets and shutting down traffic on route two. On Martin Luther King Jr. Day, approximately ninety activists marched in the streets near the Cudell Recreation Center and the Anderson home, and at one point protesters clashed with police after a series of arrests on the Veterans Memorial Bridge. In the aftermath of the not guilty verdict on behalf of Michael Brelo, hundreds protested throughout the day in Westpark, at the home of Cuyahoga County Prosecutor Timothy Mcginty, as well as downtown Cleveland, where riot clad police made over seventy arrests for alleged “failures to disperse”. Alongside these, numerous other actions have been carried out, from protests at city hall, to rallies outside of the quicken loans arena during the NBA finals.

The most well-known case of police violence in Cleveland is the November 2014 shooting of 12 year old Tamir Rice, who was playing with a bb gun outside of the Cudell Recreation Center. A police response was requested by a 911 caller who was concerned about a “kid” who may have had a gun, the caller added that it was likely a toy. Information as to Rice’s probable age and the fact that the alleged firearm was a toy was never forwarded to the officers dispatched, Timothy Loehmann and Frank Garmback. Loehmann and Garmback arrived on the scene shortly thereafter, driving their cruiser to within a few feet of Rice, at which point Loehmann exited the vehicle and fired two shots at Rice, which eventually led to his death. Neither officer attempted to provide first aid in the time between the shooting and the eventual death of Rice due to his injuries. Loehmann, who had been deemed “unfit for duty” at the nearby Independence Police Department before resigning and joining the CDP, claimed that Rice pointed his bb gun at him. To date, it has been seven months since Rice’s death and no indictments have been made in the ongoing case. However, some hope can be derived from a recent opinion by a local Municipal Judge, which ruled that probable cause exists to charge Loehmann with murder and Garmback with negligible homicide.

The November encounter in 2012 that left Timothy Russel and Malissa Williams dead after an extensive car chase is another incident of police violence which stands out in Cleveland. This particular incident ended in a violent shooting in which CDP officers fired one hundred and thirty seven shots at the couple who were alleged to have fired on police, later evidence showed that Russel and Williams were unarmed, and that a car backfiring earlier in the chase was the impetus for officers to believe otherwise. Michael Brelo, a CDP officer involved in the shooting and the only CDP officer to be formally charged with a crime in connection with the incident, was recently found not guilty on two counts of voluntary manslaughter.

Also of note is the November 2014 incident that took the life of Tanisha Anderson. Anderson’s parents requested assistance when she began to experience a mental health episode, and police arrived on the scene shortly thereafter. In the process of moving Anderson to a police cruiser, where she was scheduled to be moved to a hospital for her condition, a CDP officer violently restrained her, an action which led to her death. A local medical examiner later determined that Anderson’s death was a homicide, however there have been no indictments in relation to the incident to date.

Although strong at times, the movement for justice in Cleveland has some difficulties of its own to deal with. The groups in Cleveland responsible for activism can often seem lacking in organization at times, however their tenacity and dedication show that the groundwork for a more effective movement is very much alive. A social networking group known as #OrganizeCLE is sometimes used as an organizing body to plan events, and when this is combined with larger networks more effective organizing can arise. A quick look at some of the background of activism in Cleveland might explain why organizing can sometimes seem so challenging. The memory of the FBI sting mission against four Cleveland Activists in 2012, which was largely seen as entrapment in the context that all four were pushed to carry out a bombing of a Cleveland bridge and were supplied with plans and fake explosives by a paid FBI informant. Rightly so, many activists are worried about agent provocateurs and the role they might play.

In the midst of all this, those radicals in Cleveland who wish to fight back against police brutality and all of the most oppressive elements of the capitalist system must organize. One of the most pressing needs in Cleveland is for a revolutionary body that can effectively organize resistance to capitalism and the problems it creates. In its place as of right now, very little exists, apart from small circles of Anarchists, and a few Socialist student groups. The two leftist parties that do exist in Cleveland are largely ineffective at their job, one being the Communist Party USA, which often has weak organization in Cleveland, alongside a national tendency to compromise with the bourgeoisie. The other, the Revolutionary Communist Party, often uses tactics that while having a revolutionary goal in mind, sometimes finds trouble engaging those they interact with, especially among younger activists. What is desperately needed is an alternative for radicals to rally around, organize, and begin pursuing courses of actions that can effectively halt police violence against people of color not while refusing to reconcile with the ruling classes and those that serve them. This outlook must be of great importance in the minds of leftists in Cleveland as work continues to move forward in search of justice.