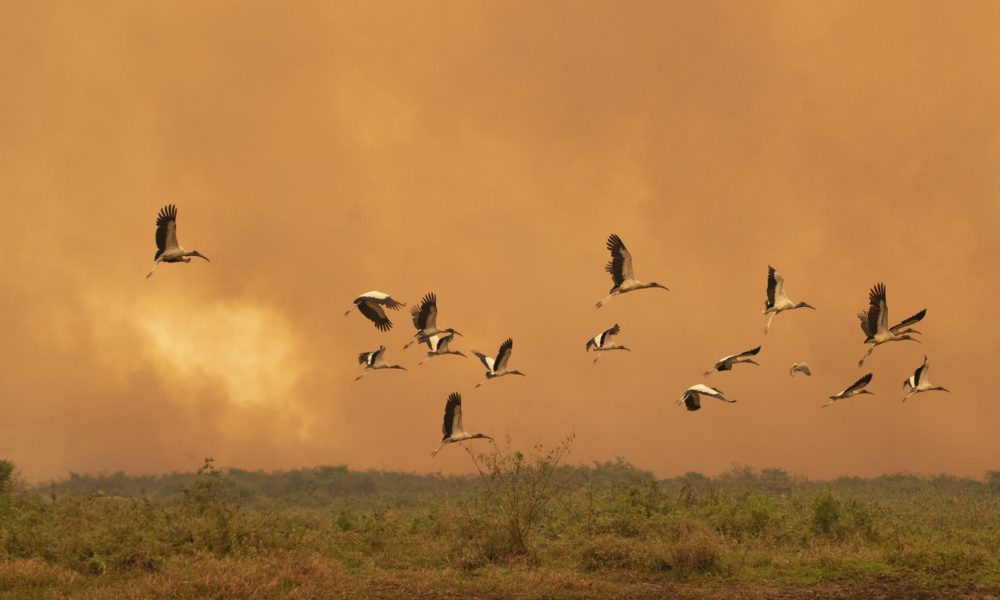 Image: Birds fly past as a fire consumes an area next to the Transpantaneira road (André Penner/AP)

As the sky turns red across the West Coast and the effects of the massive forest fires are felt across the country, there is a less-talked-about fire raging right now. This one is in the Pantanal of Brazil, or the Brazilian wetlands. The area burning is near Brazil’s western border with Bolivia and Paraguay. It has been on fire since mid-July. An area bigger than New York City has been charred: more about 5 million acres.

The Pantanal is the world’s largest wetland. It is home to thousands of indigenous people — many of whom continue to live off the rich resources of the land. It’s also home to wildlife, including the jaguar, the capybara, rare birds, and more. The Panatal is home to 1,200 vertebrate animal species, including 36 that are endangered. The images are startling: forest animals caught in the flames, walking bewildered in the ashes. Their lungs are full of smoke. There is no food.

So far this year, there have been 2,534 recorded fires in the Pantanal. That is more than double the number of fires in all of Brazil recorded last year. They are the most numerous and largest fires recorded in the country in decades.

These fires result from the warming temperatures caused by climate change. Floods that used to cool the region and help control forest fires are long gone. Scientists blame this on the warming of the Atlantic Ocean.

But these fires are not just a result of climate change; they were set on purpose. According to the Integrated Multiagency Operational Coordination Center (Ciman-MT), people are setting the fires to clear a pasture area for cattle. And beef is a Brazilian cash crop that creates huge profits for local and foreign agribusiness, which has long played a central role in destroying Brazilian natural resources.

The sector of the bourgeoisie represented by agribusiness pressures governments to further deforestation in order to guarantee grazing areas for cattle and plantations. In fact, as Brazilian socialist Leticia Parks explains, the large lands owned by agribusiness have not been touched by the fires — which were set strategically.

The fires are a direct result of government policies. In 2020, in the state of Mato Grosso do Sul alone, where 65 percent of the Pantanal is located, fines for deforestation and illegal burning decreased by 22 percent compared to the same period in 2019. From the beginning of the year to September 14, 50 vegetation-related fines were imposed, while in the previous year this number was 64. The workers at Ibama, the Brazilian Institute of the Environment, have denounced the lack of inspections — it is clear that the agency is bending to political pressure. Yet workers who have spoken out have been prosecuted by the Bolsonaro government.

As Parks, who is running for City Council in São Paulo, says, “This is a policy of extermination. … Indigenous people have the right to self-determination, and the working class stands side by side with them in defending the environment and land. In order to save the environment, we need to overthrow the Bolsonaro government as well as this system that exploits the planet and the working class. We want to change the system.”