The Women Incendiaries of the Paris Commune

The Paris Commune was founded 150 years ago. Women stood on the first lines of the attempt to "storm heaven." The first working-class government in world history represented an inflection point for the feminist women. This is an excerpt from Andrea D'Atri's book "Bread and Roses: Gender and Class Under Capitalism," which has just been published in English by Pluto Press.
Share on facebook
Share on twitter
Share on email

A Government of the Working People of Paris

When the enemy forces of the Prussian army surrounded Paris, hunger forced the city to surrender, after a long siege, on January 28, 1871. Two weeks later, the French National Assembly voted for peace. The people of Paris denounced the reactionary Assembly for concluding a peace that humiliated the French nation, and the National Guard in Paris refused to hand over its weapons. The Assembly, faced with a rebellion of its own army and the Parisian people, moved to Versailles with the goal of subduing the insurrectionary capital from there.

This is an excerpt from:

The rebellion by the people of Paris installed a revolutionary city government on March 18, 1871. It called on the other municipalities of France to follow suit and unite in a federation. Raising a red flag on the mast of the city hall, this first workers’ and people’s government in history soon decreed the separation of church and state, the right to recall all government officials, the rule that parliamentarians could earn no more than a workers’ wage, and equal rights for women.

Meanwhile, Adolphe Thièrs, the head of the Versailles government, intensified the attacks against the rebels, under the approving eye of the Prussians. The resistance of the glorious Paris Commune could only be broken after weeks of bloody combat that ended with atrocious reprisals that cost between 10,000 and 20,000 lives, constituting one of the cruelest cases of repression in history.

Brave women participated in the Commune with a passion, taking up arms and resisting the troops of Thièrs and also those of the Prussians, until the defeat meant death in combat, deportation, or execution by firing squad. Newspapers of the time describe the women of the Commune with words like these: “I saw a young girl dressed as a national guard walking with her head held high among prisoners with downcast eyes. This woman, tall, her long blond hair floating on her shoulders, challenged everyone with her eyes.”1The Times, May 29, 1871, quoted in French translation in Le Site de la Commune de Paris, our translation. These women were workers, housewives from poor neighborhoods, small merchants, teachers, prostitutes, and slum dwellers. They organized themselves in revolutionary clubs such as the Women’s Vigilance Commit-tee or the Women’s Union for the Defense of Paris, just as women had done in the French Revolution of 1789. In contrast to the women who participated in the Great Revolution, this time women who wanted to fight were allowed to. The proletarians of Paris did not deny them weapons, as the bourgeois revolutionaries had done.

In an interesting study of the Paris Commune, Silvio Costa from Brazil highlights the names of numerous women who participated in different revolutionary organizations:

Among the women of this period, the best known was the socialist activist Louise Michel, the founder of the Women’s Union for the Defense of Paris and Care of the Wounded, and a member of the First International. Those who also stand out: Elisabeth Dmitrieff, socialist and feminist activist; André Léo, editor of the newspaper La Sociale; Beatrice Excoffon, Sophie Poirier, and Anna Jaclard, members of the Women’s Vigilance Commit-tee; Marie-Catherine Rigissart, who commanded a women’s battalion; Adélaide Valentin, who rose to the rank of colonel, and Louise Necke-becker, a company captain; Nathalie Lemel, Aline Jacquier, Marcelle Tinayre, Otavine Tardif, and Blanche Lefebvre, founders of the Women’s Union, the last of whom was executed by reactionary troops; and Josephine Courbois, who had fought on the streets of Lyon in 1848, where she was known as the queen of the barricades. One should also mention Jeanne Hachet, Victorine Louvert, Marguerite Lachaise, Josephine Marchais, Leontine Suétens, and Natalie Lemel.2Silvio Costa, Comuna de París: O Proletariado Toma o Céu de Assalto (São Paulo, Anita Garibaldi, 1998), our translation.

These are only a few names of the hundreds of women who, often anon-ymously, became martyrs of the world proletarian struggle, as victims of bourgeois repression. Many of the women who were captured after the defeat were accused of being “women incendiaries.” In the words of one historian of the period:

Some sources refer to women as incendiaries—les pétroleuses—setting fire to public buildings during the final Semaine sanglante [“Bloody Week”] of the Commune. Such stories appear to have been government-inspired anti-feminist scaremongering, and most foreign correspondents present did not believe them. Nonetheless, hundreds of women were summarily executed— even beaten to death—by government troops, who suspected them of being pétroleuses. Yet, despite the fact that many more women were later accused of being incendiaries, the councils of war did not find a single one guilty of that offence. However, there is evidence to suggest that, during the final days, women held out longer behind the barricades than men.3Allan Todd, Revolutions 1789–1917 (Cambridge: Cambridge University Press, 1998).

The Women Incendiaries and the Ladies with Parasols

Among these women of the working class, the name Louise Michel shines out. Her biography illustrates the lives of fighting women of that epoch. She was born in 1830 as the illegitimate daughter of a servant. She was educated and became a teacher. In 1869, she was the secretary of the Democratic Society for Moralization, which aimed to help workers. During the Paris Commune, she led the Club of the Revolution and its armed militias. When the Commune was defeated and thousands of combatants were killed, deported, or shot, Louise Michel was condemned to ten years of exile.

In the summary trial that was held to convict her, she declared:

I belong completely to the Social Revolution […] What I demand from you, who claim you are a court-martial, who pass yourselves off as my judges, you who don’t hide the way the Board of Pardons behaves, you who are from the military and who judge me publicly—what I call for is the field of Satory, where our revolutionary brothers have already fallen. I must be cut off from society. You have been told that, and the prosecutor is right. Since it seems that any heart which beats for liberty has the right only to a small lump of lead, I demand my share. If you let me live, I will not stop crying for vengeance, and I will denounce the assassins of the Board of Pardons to the vengeance of my brothers.4Louise Michel, The Red Virgin: Memoirs of Louise Michel (Tuscaloosa, AL: University of Alabama Press, 1981).

Finally, deported to the French colony of New Caledonia, she collaborated with those fighting for the political independence of the islands. Two years after her return to France, in 1881, she was prosecuted for leading a demonstration of the unemployed that ended with the expropriation of shops. On that occasion, it is said, Louise carried a black banner for the first time, a color that was later taken by the anarchists as a symbol for their struggle. For that demonstration, she was sentenced to six more years in prison. She finally died in 1905 at a conference for workers in Marseilles. Her life is an example of heroism and dedication to the struggle against exploitation.

It is easy to understand that there could be no unity with bourgeois women on the barricades. Two classes were in open struggle, and women joined one side or the other according to their class interests. In Paris, the workers resisted the savage and shameful attacks of the army commanded by the French bourgeoisie. The bourgeoisie was collaborating with the former Prussian enemy, which freed its prisoners of war so that they could enlist and fight against the French proletariat in arms. The men and women of the bourgeoisie fled Paris in the face of the new workers’ power that threatened their class privileges, and collaborated as agents and informants of the repressive government. After the defeat of the heroic Communards, the women of the bourgeoisie returned to their homes and strolled down the streets of Paris, rejoicing in the return of “order” and dipping, as some engravings from the time show, the tips of their parasols into the still fresh blood of the men and women who had tragically become martyrs.

In the nineteenth century, all the contradictions that had begun to germinate in the previous century now unfolded in their full dimensions. The proletariat entered the historical stage as a distinct class that rebelled against the savage exploitation by capital. As these struggles show, among hundreds of strikes, rallies, acts of sabotage, and revolts by the workers’ movement of the nineteenth century, the history of that century is that of the disintegration of the “united front” between the bourgeoisie and the proletariat who had fought against the clergy and the aristocracy in order to create modern capitalist states.

In 1830, with the century’s first economic crisis, misery and discontent spread. These formed the foundations for the social revolution that swept through the European continent and gave rise to a wave of revolutions that became known as the 1848 revolutions. The conflict of interests, the antagonism between classes, unfolded for the first time in history in all its magnitude. The proletariat, which had been an ally of the bourgeoisie against feudal absolutism, was openly transformed into a potential enemy.

The bourgeoisie, cowering in fear of the proletariat in arms, became powerless to carry out its historical mission:

In 1848 the bourgeoisie was already unable to play a comparable role [to that of 1789]. It did not want and was not able to undertake the revolutionary liquidation of the social system that stood in its path to power. We know now why that was so. Its aim was—and of this it was perfectly conscious—to introduce into the old system the necessary guarantees, not for its political domination, but merely for a sharing of power with the forces of the past. It was meanly wise through the experience of the French bourgeoisie, corrupted by its treachery and frightened by its failures. It not only failed to lead the masses in storming the old order, but placed its back against this order so as to repulse the masses who were pressing it forward.5Leon Trotsky, The Permanent Revolution and Results and Prospects (London: New Park Publications, 1962).

This rejection of the masses transformed, during the Paris Commune, into rivers of blood—and there was no turning back. As different authors point out, in the new historical period that was taking shape on the horizon, both in the struggles and in the new forms of social organization, working and oppressed women constituted an important vanguard among those sectors of the masses who “pressed forward” in a struggle that pitted them against other women who had once been their allies.

This is an excerpt from: Andrea D’Atri, Bread and Roses: Gender and Class Under Capitalism (London, Pluto Press, 2020). 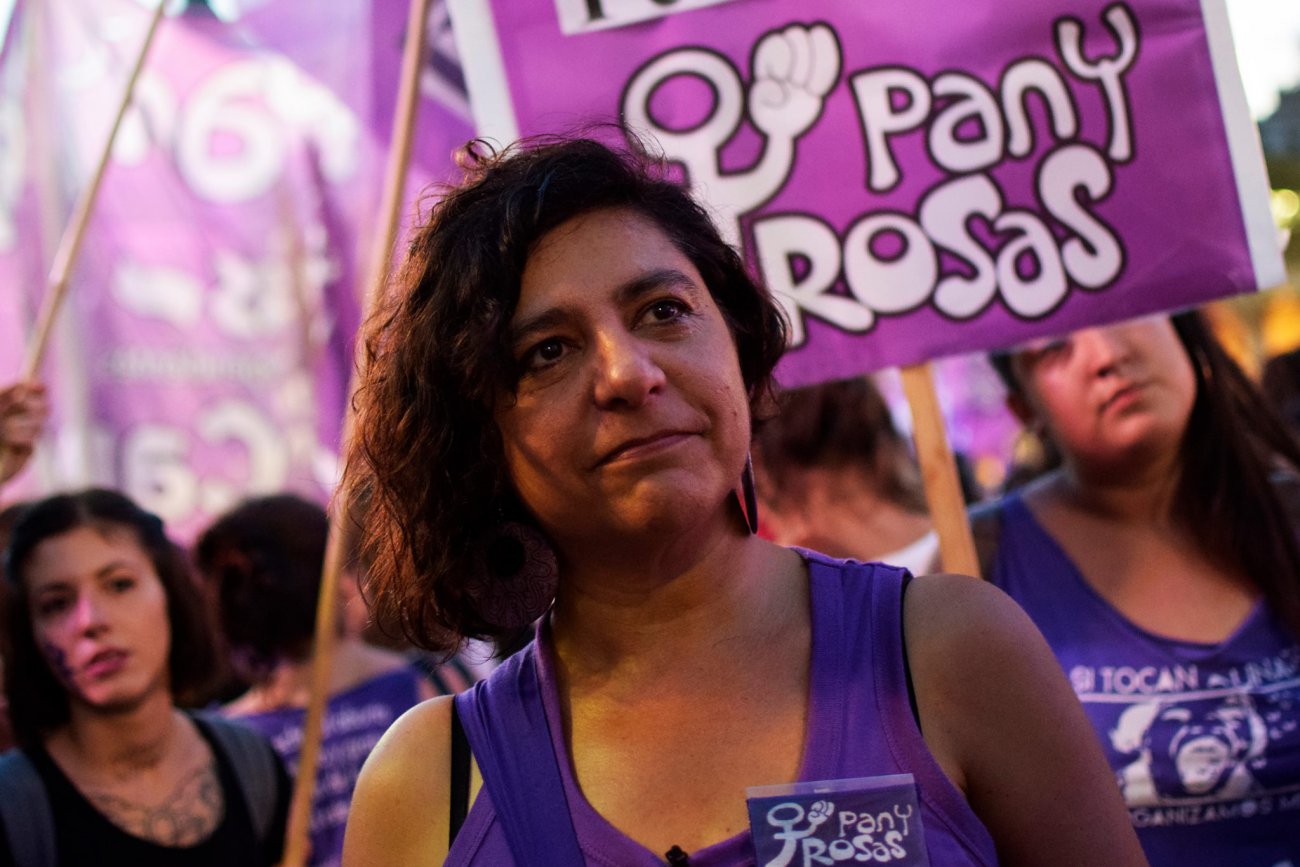