The Yellow Vests and the European Elections

Elections to the European Parliament will take place on May 26. In France, protests by the Yellow Vests continue and the government of Macron is in a profound crisis. Revolutionary socialists are calling for a critical vote for Lutte Ouvrière (Workers’ Struggle). We publish a call from our sister site Révolution Permanente. 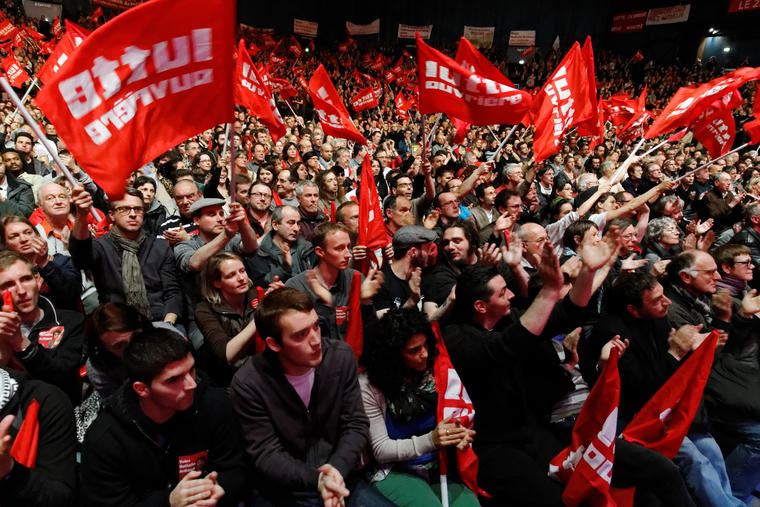 The militants of the Revolutionary Communist Current (or CCR, its initials in French) who publish the online newspaper Révolution Permanente, are also a part of the New Anticapitalist Party (NPA), known for its public figures Olivier Besancenot and Philippe Poutou. Because the NPA lacks the funds to participate in the the next European elections, the NPA has called on its supporters to vote for Lutte Ouvrière (Workers’ Struggle) and its candidates. In this article, we explain why.

The Yellow Vests Movement and the European Elections

Since November 17 of last year, the yellow vests movement has been shaking the political situation in France. They put social questions back at the center of political debates. Thinking back to when the media was taken over by debates about immigration, security and terrorism, it is clear that the movement put the focus back on unfair taxation, the high cost of living and low salaries and pensions. By the end of November, what began as a series of spontaneous protests turned into a solid movement with broader demands, questioning the country’s antidemocratic institutions. The movement also inspired a massive questioning of the president, the repressive military forces and even the state itself. Better yet, their radicalization, their methods and their aspirations have given the ruling class a certain fear of revolution.

After being forced to retreat on December 10, President Emmanuel Macron’s government began a major operation to discredit the movement. The government struck back with exceptionally violent repression, killing one protester and injuring hundreds of others. Despite all this, the movement is still going strong after 22 consecutive protests, showing the anger felt by a large part of society, even in the face of a certain strategic stalemate.

In response to the movement, the government organized what it called the Great Debate, a series of local (and online) meetings with government officials, in an attempt to channel the movement’s demands. Macron’s government managed to mobilize only a tiny sector (an older, richer and more urban sector than the yellow vests) while addressing only the issues most convenient to the president. Not a word was uttered in this Great Debate about the wealth tax on great fortunes, and no answers were given regarding the demands to lower consumption taxes for working people. This smokescreen served a double purpose: to contain the damage Macron has suffered since the birth of the yellow vests movement and to take the first step in Macron’s campaign for the European elections. All of this cost 12 million euros’ worth of public money.

A False Choice Between Macron and Le Pen

Despite his government’s crisis, Macron and his party, La République en Marche, lead in the polls, followed closely by Le Pen’s far-right party, the Rassemblement National (RN, National Rally; formerly FN, National Front). This shows the great contrast between the general climate of social crisis that the country has experienced for the last five months and how the crisis is expressed in the political and electoral plane.

All political demands in France over the last few months have been about social questions, such as wages and pensions, while establishment politicians almost exclusively debate immigration or whether or not to leave the EU.

Furthermore, these questions are posed as binaries: one is either for or against the European Union, for or against taking in immigrants. Macron is hoping to repeat the scenario of the last presidential election, which came down to a face off between the Rassemblement National (the “nationalists”) and La République en Marche (the “progressives,” at least according to Macron).

It cannot be denied that the left has its share of responsibility for this situation. Leaving aside the fragmentation of the “left’s” electoral lists (without getting into the argument about whether there is anything left-wing in the lists of the Greens or the Social Democrats), all these lists have adapted to this polarization. From Génération (former members of the Socialist Party) to the Communist Party, as well as the France Insoumise (Untamed France) of Jean-Luc Mélenchon, all have failed to present themselves as a third pole, as an alternative to the reactionary options on offer.

The case of La France Insoumise (LFI) is worth examining. Mélenchon got 20% of the votes in the first round of the last presidential elections, and thus became the main hope for youth and working people. After Macron’s victory, Mélenchon represented the strongest opposition to the government’s neoliberal program, and he supported many movements and demonstrations. But LFI limits its opposition to the institutions of the bourgeois republic, subordinate to an electoral strategy for 2022. When it comes to European matters, LFI gave a lot of ground to nationalist parties by holding a murky position in favor of “left-wing sovereignty.”

In 2015, Mélenchon supported Syriza in the Greek elections. Syriza’s government showed the impotence of reformism against capitalism and the European institutions. Mélenchon later said that Syriza leader Alexis Tsipras’ mistake was not having a plan B of leaving the Eurozone. Nowadays, for electoral reasons, his plan A is to renegotiate the terms of the EU, and plan B (which he hardly mentions) is to leave it.

The Working Class Needs Representation That Is Both Revolutionary and Internationalist

In a context like this, it is hard to see an alternative to this polarization, a third pole that defends the interests of working people and offers a revolutionary political answer to the the demands raised by the yellow vests. Aspirations to change the system are being answered with proposals to reform it. The radicalism of the anger that has broken out is being met with proposals to compromise with those who exploit us. As the spectre of revolution is returning, they offer us marginal changes to the existing regime.

But this third pole exists: the unity of the working class of all countries of Europe against the “Europe of Capital”. Capitalists in all European countries continue competing with each other while at the same time trying to form an alliance that lets them keep pace with great powers like the United States, China or Russia. The capitalists try their best to spread the myth that “Polish plumbers come to steal the jobs of French workers,” but we know better: The working classes of every country have common interests and  only they can unite all the peoples of Europe. They are the only ones who can end capitalism, organizing production according to the social and ecological needs of the majority, not for the benefit of a small minority.

In these elections, some candidates present immigration as a problem. Whether they want to fight it and compare it to terrorism, or tackle its “roots” by strengthening French interventionism and imperialism, we stand against their xenophobic views. These are our working-class brothers and sisters, with whom we share interests and enemies. We must therefore demand freedom of movement and migration, no matter if they are “refugees” or “economic migrants.”

Only the far left consistently defends these ideas and can use the elections as a tribune to present them. The two main left-wing parties in France, Lutte Ouvrière and the NPA, have joined forces before. In 1999, LO and the Revolutionary Communist League (LCR) formed an alliance that got 5% of the votes, putting Trotskyist representatives in the European Parliament for the first time in its history. Participating in the European elections costs about 1.5 million euros, which is an additional antidemocratic obstacle for small organizations financed exclusively by contributions from their members. This is just another reason for the far left to join forces.

After the NPA (including the militants of Révolution Permanente) proposed an agreement with Lutte Ouvrière, the leadership of the latter did not want to present a joint list. As a result, the NPA failed to gather the financial resources necessary to present its own candidates. Lutte Ouvrière has presented candidates but is banned from the two televised debates, under the pretext of “press freedom.”

Vote for Lutte Ouvrière and Organize Against Macron’s Government

Even though revolutionaries do not see participation in elections as the crucial issue for achieving radical change in society, we nonetheless believe that the way our readers choose to vote on May 26 will be significant.

The social discontent that is today expressed by the yellow vests has for years led to abstention or, even worse, votes for the Rassemblement National, the worst enemy of the working class.

At a time when the yellow vests are questioning the institutions of the Fifth Republic, discussing revolution and trying to dodge the trap that is the debate around immigration, it is necessary to transform this anger into an internationalist and revolutionary project which defends the interests of the exploited.

Even though we have disagreements with the LO and its candidate, Nathalie Arthaud, which we will return to in other articles, they do have a clear internationalist program which defends free movement and migration, and calls for the working class to organize and struggle with a revolutionary perspective against the capitalists. It would be sectarian to let our differences, even major ones, be a barrier to the unity of the parties that define themselves as revolutionary. This will help us express our ideas as broadly as possible. With the NPA unable to participate, we say this loud and clear: Workers, this May 26, we must vote for Lutte Ouvrière!