The Youth Rise Up in the Heart of Capitalism

Lower Manhattan, around Wall Street, is probably the place with the greatest concentration of capitalists in the whole world. On Friday, up to 250,000 youth rocked the narrow city streets lined with skyscrapers. The New York City climate strike demanded immediate action against climate change. 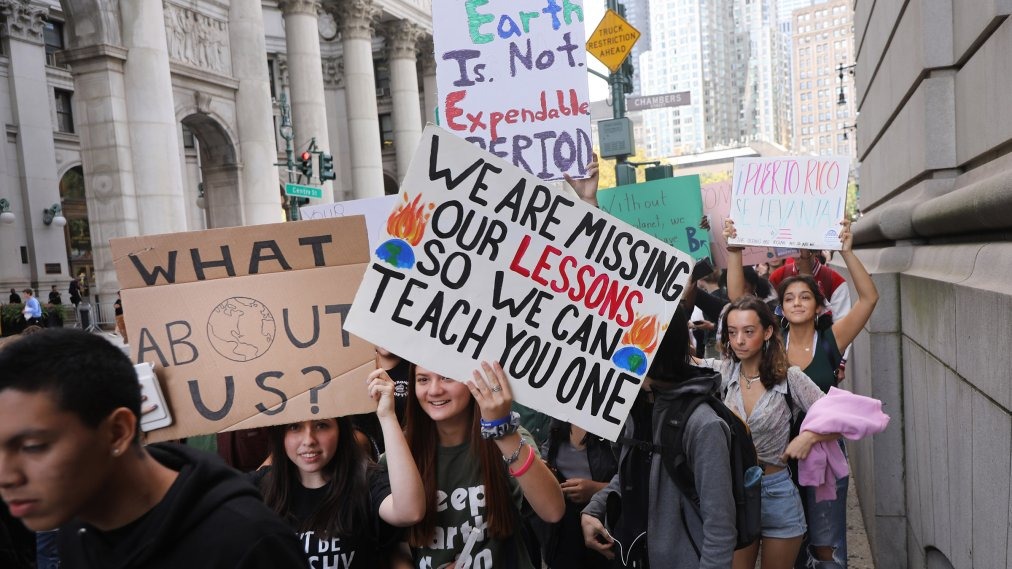 Image from Time: 'This Is an Emergency. Our House Is on Fire.' Greta Thunberg Addresses New York's Climate Strike.

By noon, an hour before the march was supposed to start, Foley Square was packed. The tiny square in front of City Hall in Lower Manhattan quickly filled up with young people carrying hand-painted signs. For hours, they kept piling in, mostly high school students, though middle and elementary school students attended as well. As the crowd started chanting “Fuck Trump,” I saw their eyes widen as they snickered among themselves—the thought of thousands of people yelling “fuck” clearly amused them. Kids as young as ten and eleven attended, proudly displaying their drawings on cardboard. One portrayed a minion and read “This minion is melting because of you. Sad minion.” Others read “Save the World” or, as a particularly creative fourth grader’s sign read, “Every disaster movie starts with a President ignoring a scientist.”

These kids are afraid. Afraid for their future, and for the future of the planet. As one student wrote, “You will die of old age. We will die of climate change.” The same message reverberated in the over 3,500 protests held around the world today. The youth want a habitable planet. They know that to make that happen, they need to mobilize. As one of my favorite protesters said, “the ocean is rising, but so are we.”

The New York Police Department, in contrast, created chaos: they set up barricades throughout the square, and were actually trying to direct traffic through the tiny square. They showed that their loyalty lies with the giant SUVs and trucks clogging up the city. Soon enough, however, young people were climbing over the barricades and shutting down the traffic themselves—an important lesson for young people, many of whom were participating in their first big demonstration.

The city’s government, under the leadership of Democrat and Mayor Bill DeBlasio, also showed its true colors. DeBlasio wants to be seen as “liberal” and serious about climate change. So he had decreed that the city’s 1.1 million students would be allowed to miss school if they got permission from their parents. But he also prohibited teachers from striking alongside with their students, because this would violate their “neutrality.” The teachers’ union, unfortunately, failed to call out their members to strike despite the ban. Many high school students thus came by themselves. Younger students came in groups organized by parent chaperones.

One student from Bard High School, for example, estimated that 70% or more of the students had joined the strike. Teachers were being forced to teach classes with 1-2 people.

The march set off late, winding through a labyrinth of police barricades. Nevertheless, the young strikers continued chanting and singing for hours. According to the organizers, 250,000 people took part in the climate strike. The one-mile route led straight through Wall Street. Nowhere in the world is there a greater concentration of capitalist gangsters who are endangering the survival of humanity for their profits.

The young people came with strong messages. Most of the signs contained popular slogans about saving the planet (“There is no Planet B”), but there were also a number of anti-capitalist slogans painted on signs. “Forget about the straws,” said one, rejecting campaigns that place the responsibility for climate change on the shoulders of individual consumers. Another sign said: “Reforming capitalism won’t save us.” As one 13-year-old told Left Voice, “We have to protest against capitalism because clearly capitalism hasn’t gone very well for the planet because all these corporations have been killing our planet.”

New York City has more union members than almost anywhere else in the U.S. A number of unions supported the march, but few actually mobilized their members. There were contingents from the PSC (university lecturers) and SEIU 1199 (healthcare workers), as well as tech workers who had organized themselves. Most of the tech workers had taken a day off. “People who work in tech have more privileges,” said David, a software engineer, “and thus more responsibility.” Tech companies could play a leading role in decarbonizing the economy and workers are organizing online to make that happen. At the Amazon Headquarters in Seattle, for example, 1,700 workers walked off the job.

One song repeated by young protesters went: “We’re going to strike because the water is rising. We’re going to strike because people are dying. We will strike for you—will you strike for us?” As the number of workers who joined the tens of thousands of students in New York demonstrated, the young people are having a huge effect on the working class—the people who keep the capitalist economy running every day, and can thus shut it down.

It took several hours for the march to push through the narrow streets and reach the final rally at Battery Park. The speeches were militant, but reflected the contradictory ideas in the movement right now. Two young activists got roaring applause when they shouted: “We need a revolution, because they are running out of time!” But then a minute later added: “One day it is going to be us that fills Congress and the White House.” There is a strong desire for “revolution”—but many people still imagine that a revolution towards a sustainable form of society can take place from within capitalism’s institutions. The next speaker correctly demanded urgent action, but then proposed “voting” and “planting trees”—things that, while useful, do not begin to address the scale of the catastrophe we are facing.

The rally ended with a speech by Greta Thunberg, the 16-year-old Swedish climate activist who crossed the Atlantic in a sailboat. “We are unstoppable!” she called out. On Monday, the UN Climate Summit is beginning in New York City. It is clear, however, that capitalist politicians will offer nothing but nice words and empty promises. This strike was just the beginning. As one protester put it: “The strike is just the beginning of tearing down the system!”