“This is Our House”: Voices from the Hunts Point Market Strike

“Right now, there are 60 trucks out there and they don’t have people to unload them. Why? Because they need us.” 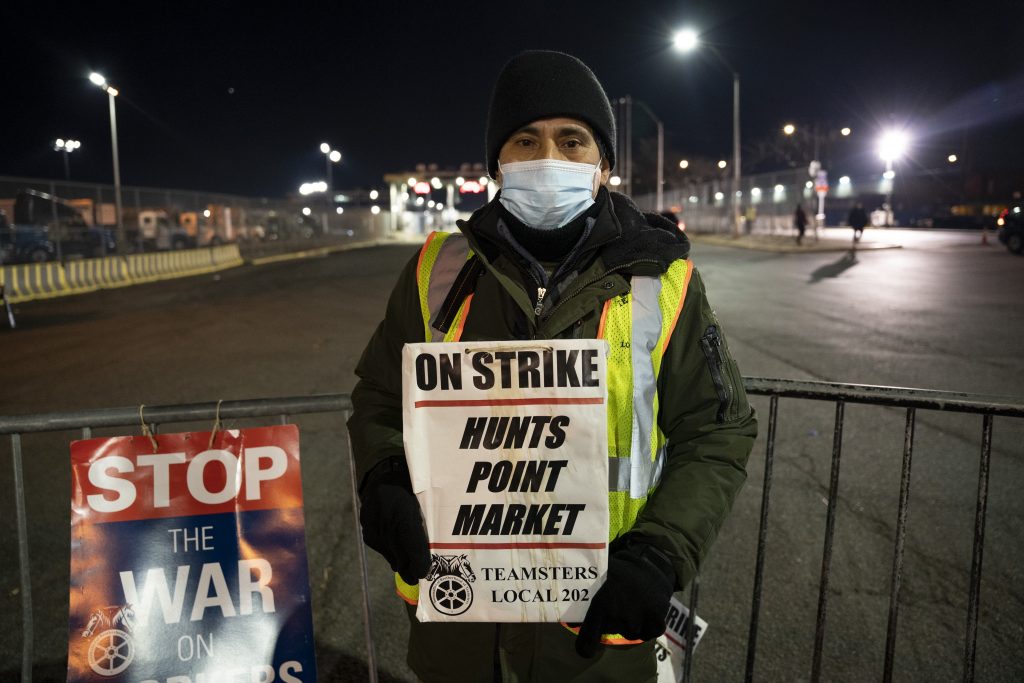 The Hunts Point Market Strike is in its sixth day, and every day has been growing in notoriety and strength. Every day, hundreds of workers join the 24-hour picket in front of the Hunts Point Market. Even though they aren’t getting paid, they stay their whole shift— and that includes the night shift. In freezing cold weather, bundled up and standing amidst burning trash cans to keep warm, the workers remain at the picket line all night.

“It’s not that different from my regular job,” Fila, one of the striking workers, tells me. “In the winter, we have no heat. In the summer, we have no air conditioning. And we have to buy and pay for our gloves, our winter gear.”

All the workers are asking for is a one dollar raise per hour and better health benefits. That’s all.

“The cost of living has gone up, it’s not enough for us to live.” Fila has been working at the company for 32 years. He moved to the United States from Mexico when he was a teenager and told me about his love of literature, like the works of Antoine de Saint-Exupéry and Gabriel Garcia Marquez.

Marcos, another worker explained, “The contract is over and they came back with 32 cents. A lot of the guys died with me here. We kept this place open. I don’t think it’s fair…While the bosses were home, I was here working for them. We are essential workers. We kept their business open. It means something to me. We should be appreciated. They got money, they got millions. They didn’t share it with us. We deserve that or more.” When I first arrived at the picket, Marcos, a Puerto Rican who has been working at Hunts Point for over 20 years, was holding a book about the Teamster Rebellion by Farrell Dobbs. He explained that he’s reading the book because “it teaches you about how the union started. I wanna learn more. I wanna have more power. I want more people to have a union. Because without a union, we’re going to lose power in this country. So, the more knowledge I get, the better I become.”  He works the night shift: 8 pm to 5 am, Sunday to Thursday.

And it’s not much to ask. These workers worked all through the quarantine. Marcos told me about how hard it was to leave his kids every day. “They cried even,” he explained. They knew it was dangerous for their dad to go to work during quarantine.

Another worker, Maximo, said, “My kids, every time I come here, are worried. ‘You could get sick, papi. You could have an accident.’ And I tell them no, it’s my job and it’s a job I like. I do it with love and effort.”

And indeed it was dangerous. At least six workers at Hunts Point died of COVID throughout the pandemic, and 300 were infected. One worker told me that as we speak, a co-worker is struggling to make it due to the disease. And although Hunts Point Market workers are essential workers, they didn’t get any extra hazard pay during the pandemic. In fact, some workers said that in the early days of the pandemic, as it spread through the city, the bosses didn’t provide them any PPE; they had to get them through the union. And this is a hazardous job even without a pandemic. Jonathan talked about workers sometimes breaking their legs on the job: “it’s heavy machinery. It’s easy to get hurt if you are not careful. You need a lot of training to do this job.”

Maximo said, “The work we have is hard. It’s not just anyone that can do it. You get really tired physically and also psychologically. Right now, there are 60 trucks out there and they don’t have people to unload them. Why? Because they need us. They brought in new people to work. But they can’t. But we’re the ones who know how to do it. You need to be trained.” Looking around at the picket and motioning to older co-workers, he continued, “That’s why I’m so thankful for my older co-workers. Some who have been here 20, 30 years. Who left their whole lives at Hunts Point Market. They taught us young ones to work the machines. And now they are teaching us to fight.”

The anger at the bosses— the sheer inequality— is felt by every single worker. “They got rich because of us,” worker after worker after worker explained. Jonathan, a younger worker whose partner is a healthcare worker, talked about the fact that the bosses have a “Five star lounge with a kitchen, heat, air conditioning and everything” while the workers have to eat in their cars. Further, when they have to take sick leave, given the grueling nature of their work? They have to produce a sick note from the doctor to get paid for the day off.

Meanwhile, the bosses tell workers they should just be happy they have a job. Maximo explained that the 32 cent raise was “demeaning.” “It’s because of our effort that they have become billionaires. And they don’t see it that way. They think they are doing charity. This isn’t charity.”

As Marcos explained, workers came in, day in and day out, and put their lives on the line. But the bosses were nowhere to be seen throughout the entire quarantine.

And indeed, these workers are essential. They are the largest wholesale produce market in the world. “Remember when everyone was scared the supermarkets wouldn’t be able to stock their shelves? Well, the reason they were able to is because of these workers,” said Rebecca, a teacher attending the picket in solidarity. It’s true. These workers are critical to feeding much of the tri-state area of New York, New Jersey, and Connecticut and even beyond, but they struggle to afford to feed their own families.

Hunts Point Terminal Market has received as much as $15 million in Paycheck Protection Program loans from the federal government to keep its operations running and keep paying the bloated salaries of its bosses during the pandemic.

“We have been out here breaking our backs every night, no matter rain or snow, sick or healthy, to support our family. We were here during Sandy and COVID. That’s why we are fighting for a dollar,” says Gerson Castillo, a worker at the market. Indeed, Hunts Point workers have been showing up every day for more than 10 months to continue to supply fresh produce to millions of people across the country during the pandemic.

On the first night of the strike, the workers tried to block the road to stop trucks from coming in and unloading. New York City Mayor Bill de Blasio sent two dozen riot cops to break up a small picket line. At least five people were arrested.

Last night, the workers were able to tun around a bus  carrying the potatoes and onions for all the McDonalds’ in this part of the country. One worker explained that that’s probably why their bosses went back to the negotiating table the next morning. “All these guys here overnight had the power to do that.” The workers know: that’s the power of a strike.

People have come from all over New York City in solidarity to support these workers on strike. Last night, over half a dozen healthcare workers in scrubs held signs that read “Healthcare workers in solidarity! Essential Workers Unite.” Mike Pappas, a doctor who attended the picket said, “These workers are essential. They are the ones who kept New York City running in the pandemic.” Members of Black Lives Matter New York City also came to show solidarity, along with members from other community organizations. New York City DSA was also in attendance, helping to organize solidarity and food drop off for the strikers. Politicians also came by, likely encouraged by Alexandria Ocasio Cortez, who skipped the inauguration and instead went to the picket.

This solidarity is essential, and the workers know it. They have the power to stop production and the power to stop the bosses’ profits. As Marco put it, “it’s our house.” Their strike is so powerful. But it’s solidarity that keeps their spirits up, that highlights their stories and keeps the media from demonizing them. And on the picket line, the most important lessons are learned; the deepest working class solidarity is forged; and that’s what is happening at Hunts Point. When workers stand together, they win.

Marcos said, “Workers around need to stand up. We need respect. And if other workers go on strike, Local 202 will be there to support, like you all are supporting us now.”

Fila explained it clearly: “The rich will never give us what we want. We have to fight through the unity of the working class and people like you who support us to get a raise so we can live well. If we don’t unite and we don’t fight, they won’t give us anything.”