On Friday, International Migrants Day, 270 organizations in France called for demonstrations in different cities in support of an action by undocumented immigrants. French president Emmanuel Macron has condemned thousands of people to live in fear and precariousness, but many are going out into the streets to demand the normalization of status for all. 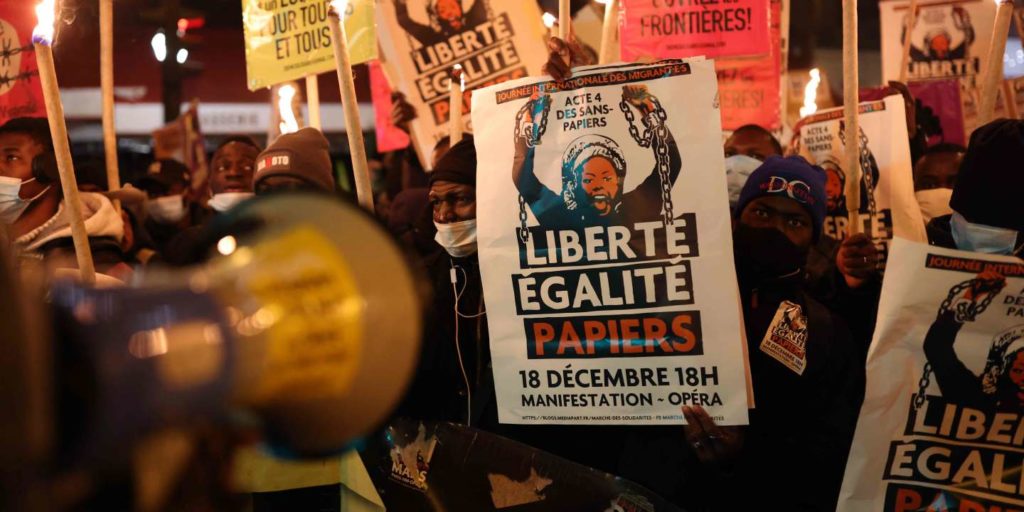 Last Friday, on International Migrants Day, 270 organizations in France held demonstrations in different cities in support of an action called by undocumented migrants. These organizations include the Human Rights League, the Solidaires Union, the New Anticapitalist Party, the Greens of Europe, and various trade union branches. The French government has condemned hundreds of thousands of people to live in fear and precariousness, but many are going out into the streets to demand the normalization of status for all.

At the end of September, hundreds of people left Marseilles on foot for Paris to oppose detention practices, deportations, undocumented migrants’ working conditions, health conditions, deplorable housing, and police violence against migrants, as well as the ever more racist and authoritarian discourse of French president Emmanuel Macron’s government.

Since the 2018 French Asylum and Immigration Act, the government has continued tightening the screws of its brutal border policy: the reduction of processing time for asylum applications, the reduction of the asylum application submission period, the greater duration of detention, the toughening of conditions for normalization, the confinement of young children, etc. Covid-19 also revealed the extent to which the border policy allows no respite for the undocumented: people locked up in migrants’ prisons without healthcare, homes severely affected by the resulting crisis, overcrowding, difficulties with complying with health measures, and diminishing of economic resources.

Furthermore, many undocumented workers employed in cleaning, mass distribution, or even delivery were on the front lines during the lockdown. Today, although they have taken on great risks without any safety net, they remain invisible within society. As the economic crisis and mass layoffs get closer, they find themselves among the most susceptible to bosses who need to quickly get rid of labor power.

The march on Friday in favor of migrant rights comes at a time when the government is deepening its racist and authoritarian discourse and its harsh anti-migrant measures. The latter continue the ever more brutal no-welcome policy, which resulted in, among other things, the violent expulsion on November 24 of migrants living at the Place de la République, in Paris. To this, we could add the renewal of a stigmatizing discourse, which includes the government’s recent xenophobic “feminist” measures, or the “global security” legislation, which strengthens police powers and will also have repercussions on the undocumented. Many testimonies show that migrants are the leading victims of police violence in detention centers removed from television cameras and during evictions, which tend to be very violent.

As the demonstration was underway in Paris, the police chief prevented it from completing its agreed-upon route.

Anasse Kazib, a railway conductor with the Revolutionary Communist Current, told La Izquierda Diario: “In light of this border policy which condemns hundreds of thousands of people to live in fear and precariousness, many of us have gone out this Friday onto the streets to demand the normalization of all migrants as well as unconditional access to housing, health care, education, and any public service.”