Thousands protest in Berlin for the right to choose

Last Saturday, the reactionary “March for Life” took place in Berlin. At the same time, several thousand counter-protesters took to the streets calling for an unrestricted right to abortion and for sexual self-determination. 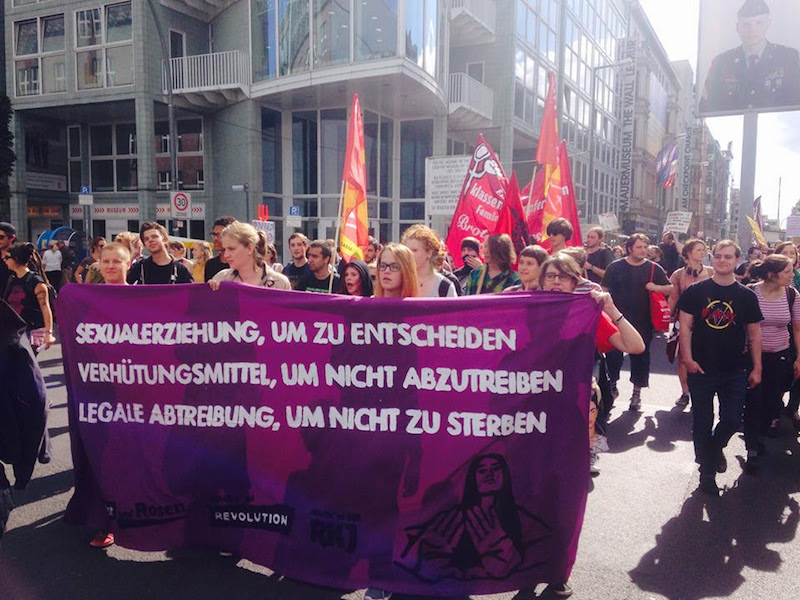 “Get the church out of my vagina!” That was written on one of the numerous protest signs against the “March for Life”.

5,000 reactionaries were marching to demand control over women’s bodies. Since 2008, clerical misogynists have organized this march to further restrict the right to abortion in Germany. The participants are fundamentalist Christians, the right-wing of the CDU, supporters of the AfD and antifeminist and racist offshoots of the Pegida movement. Their demonstration included slogans like “No to euthanasia and abortion” and speeches that compared abortion with the thousands of deaths at the EU’s external borders.

3,000 people went onto the streets to oppose these so-called “protectors of life”. Two alliances organized counter-demonstrations: The Alliance for Sexual Self-Determination, which mostly includes political parties and NGOs, and the “What the Fuck?” alliance, which organized an anti-fascist and queer-feminist demonstration.

“Sex education, in order to decide – contraceptives, in order to not abort – legal abortion, in order to not die” – this was the slogan of women from Brot und Rosen (Bread and Roses), the RKJ (Revolutionary Communist Youth) and Revolution at the protests and the blockades. And the counter-protest was successful: The anti-abortionists had to abandon half of their planned route and were blocked for over an hour. Their misogynistic “church service” was also disrupted.

The police were out in force with 900 officers. “Where were you in Heidenau?”, demonstrators chanted while police attacked them with batons and pepper spray. (In the small city of Heidenau, police had claimed they were unable to stop a right-wing mob protesting in front of a planned residence for refugees.) Several protesters were injured and dozens were detained.

The very same state that provided the police also attacks the rights of women: in Germany abortion is neither legal nor free (even though it is decriminalized in the first three months of pregnancy). The required three-day “waiting period” before an abortion is allowed is essentially blackmail. Churches still have influence on school curricula and public policy, which they use to gain control over women’s bodies with their reactionary ideology.

And not only that: The vast majority of people who do reproductive work such as child-rearing and housework are women. There are is far too few spots available in daycare centers, and only low pay is offered in public nurseries. Without these structures, however, a genuinely free decision for or against pregnancy is completely illusory.

In the current crisis of capitalist Europe, not only in Germany but throughout Europe, there are more and more attacks against women and LGBT*: In the Spanish State, the government recently curtailed abortion rights, after they had tried to pass an even more reactionary abortion law last year. The worst parts of the law could be stopped by mass mobilizations, but in the version now adopted there are restrictions against the sexual self-determination of minors. In France, the homo- and transphobic “Demo for All” mobilizes right-wingers and Christians against any model that diverges from the “man-woman family”.

In opposition to this reactionary wave, there have been hints of a new women’s movement in recent years in Germany: the protests on March 8, the “slutwalks”, and, indeed, the demonstrations against the “March for Life”. These protests, led mainly by young women and LGBT*, are militant and loud. But to rip out the roots of sexism and anti-woman laws – namely the capitalist division of labor based on gender – it also needs a perspective of class struggle. Initial signs of this were evident in the last few months, for example in the form of support for the strikes in the social and educational services, which mostly employ women for low wages. With Brot und Rosen, we want to fight for a perspective of class struggle feminism.