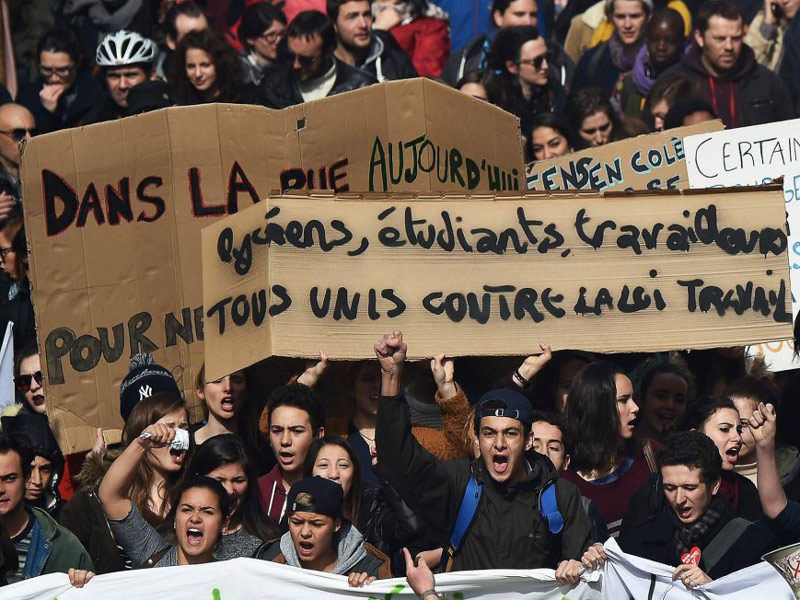 This is an adapted and updated version of an article first published on March 10 in La Izquierda Diario.

The draft labor law bill known as the “El Khomri law” (named after Minister of Labor Myriam El Khomri) has been put forward by the Socialist Party (SP) government of President François Hollande and Prime Minister Manuel Valls. These reforms, if implemented, would deliver a strong blow to labor rights. As a whole, they seek to transform France to be more like Germany, Italy, or Spain, where labor is subject to a greater degree of flexibility, informalization, and precariousness.

What rights does the El Khomri law undermine?

* Increases the maximum working day from 10 to 12 hours.
* Reduces the compensation for unfair dismissals.
* Makes it easier for companies to dismiss or suspend workers if they can justify their “losses” to a government body.
* Allows companies to decide on salary reductions and the number of hours considered “overtime”
* Increases young apprentices’ maximum number of working hours (up to 40 hours per week, 10 hours per day).
* Removes the minimum 24 hours per week rule for part-time contract workers.
* Descentralizes collective bargaining to the enterprise level, thereby making these agreements take precedence over an industry-wide collective.
* Allows for collective dismissals to take place in circumstances that include: “declines in orders or turnover,” “technological changes,” or “restructuring in order to maintain competitiveness.”

The El Khormi law formally maintains the current 35-hour work week. While President Hollande says that contracts will become more flexible, the truth is that the new reforms are designed to make it easier for companies to lay off workers–and further, grant bosses greater control over unions and collective bargaining. These “reforms” come at a time when France’s economic downturn is worsening and the fate of workers appears increasingly dismal (unemployment is at a record-high, with the national average at around 10.5 percent and 25 percent for young people). According to Minister of the Interior Bernard Cazeneuve, the reforms are expected to improve business competitiveness.

Media outlets have described these reforms as “a return to a hundred years ago” and the reappearance of “the France of L’Assommoir and Germinal” (books by French naturalist author Émile Zola). Gerard Filoche, member of the Socialist Party left and government Labor Inspector has described these counter-reforms as “the most important counter-revolution in a century”. The primary sectors supporting these ‘reforms’ are the Mouvement des Entreprises de France (MEDEF, the largest employer federation in the country) and the nation’s right-wing parties.

2. Wide-ranging social rejection and mass meetings across the country

Various surveys have shown that 70 percent of French people reject these reforms. A change.org petition which proposes a national mobilization “for a convergence of the struggle of workers, the precariously employed, the unemployed, retirees, and of all persons who are just managing to survive, ” has already gathered over 1.2 million signatures. Video artists have launched a campaign called #OnVautMieuxQueCa (We are worth more than that), which has had a wide impact on social networks.

This widespread rejection of these reforms has been transformed into action in the streets by dozens of youth organizations, which trade unions and the major union federations have now started to fall in behind.

Their joint communiqué states: “By means of the labor law bill, the government has unleashed an unprecedented offensive against youth and workers. With this reform, we high school students, university students and young people, who already face precarious conditions in our education and in our ability to find work, are now expected to accept these precarious conditions for the rest of our lives.” The communiqué also denounces the bill as a “work more to earn less” scheme; and this, as the press release highlights, while 25 percent of young people are unemployed in France.

As we have pointed out in La Izquierda Diario, there have been numerous assemblies held at various universities and high schools. “Broadening out, coordination and convergence” are becoming the watchwords of the youth. The Société nationale des chemins de fer français (SNCF – cheminots / rail workers’ union) has also joined the strike in response to the demonstrations. Many argue that the climate in France is now similar to that seen in 2006 during the youth mobilizations against the Contrat première embauche (CPE – First Employment Contract).

This has put pressure on the country’s main trade union federations to reject the bill. However, these federations are instead demanding radical changes to the bill, and not its removal. After a March 7 meeting with the government, these federations called a one-day general strike for March 31. A number of unions have since held their own strikes. Strategic sectors of the economy including oil refineries, nuclear power plants and car manufacturers have been hit by industrial action, while rail workers, truck drivers, dockworkers and Air France pilots have repeatedly brought sections of the transport industry to a halt

3. The “socialist” government of Hollande is looking to deliver a heavy blow to the unions

This bill is the most controversial piece of legislation presented during Hollande’s term. For the big MEDEF bosses who support these reforms, this bill is “moving in the right direction.”

In the face of the outbreak of social condemnation, Prime Minister Valls avoided his presentation of the bill before the March 24 Council of Ministers meeting and instead bypassed Congress by using the article 49.3 of the Constitution (a sort of decreé). This manoeuvre demonstrates the strength of the discontent surrounding this reform, and the fear that can transform this fight into a great struggle of workers and youth. Those fears are becoming true now.

Within the Socialist Party itself the first cracks are starting to appear. There are those in the party that reject the reforms, of which some suggest that even the previous right-wing government of Nicolás Sarkozy would not have dared to implement.

France is living a new climate of mobilizations, where youth and labor unite to bring down this bill. The mid and long term consequences of this spark of social unrest are still uncertain.