Timeline: From Student Rebellion to General Strike in Chile

What’s going on in Chile? A crash course on the recent protests—and their roots in economic inequality and state violence. 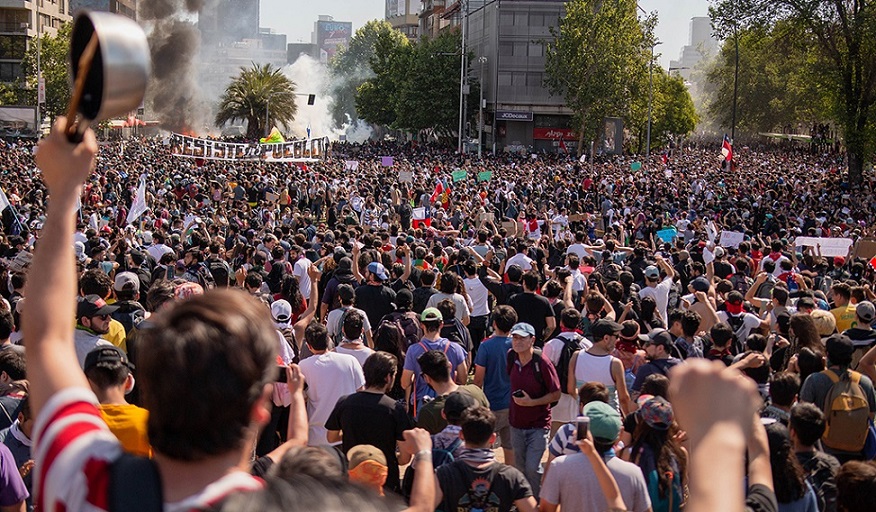 Public transport in Chile is so expensive that a person making minimum wage is forced to spend 20% of their income on transportation alone. That is why, during the week of October 14, Chilean students began protesting an additional fare hike of 30 pesos by evasiones masivas: flooding metro stations and jumping turnstiles in large groups to hold rallies in the stations and cars.

On October 17, the students escalated their protests with #EvasionTodoElDia: an all-day collective fare evasion. Students stood outside the metro stations and in front of turnstiles, blocking police and allowing passengers to use the metro for free. Not only did #EvasionTodoElDia directly target the state’s transportation revenues, but it also allowed working-class Chileans who would otherwise have to worry about the high cost of public transportation to ride for free without being criminalized for their inability to pay the fare.

The Chilean government responded to students’ nonviolent protests with military force. Countless videos show tanks rolling down city streets and soldiers shooting at unarmed protestors. The protests were no longer just about public transportation fares, but also the violent repression protestors faced and the hypocrisy of Chilean government officials, who profit off of the backs of the working poor in many ways, such as a privatized pension system that exploits the vulnerability of elderly and disabled working-class people.

(The woman recording says, “But it was a peaceful protest!”)

By October 19,  President Sebastián Piñera reversed the fare increase. But military repression of protesters continued, and Piñera even instituted a military curfew for the first time in Chile since the fascist dictatorship of Augusto Pinochet (1973-1990). As of October 23, upwards of 2,138 people have been arrested, 173 people have been shot, and as many as 15 people have been killed by state forces since October 17 (INDH). There is a massive military presence in the streets at all hours, and the military has been shooting bullets and tear gas into crowds—despite the presence of children and the elderly, with little regard for who is protesting and who is simply walking down the street.

(“We’re ready to go out and fuck with these idiots… We’re getting ready… We’re gonna kick the shit out of the fucking idiots out there.” *waves gun*)

Because of the severe violence that they are facing from the Chilean military, on top of a host of other social issues, Chileans continue to protest despite minimal concessions made by the president. This violent repression is a symptom of neoliberalism, as the state struggles to maintain a system that is simply not sustainable. Chile is a testing ground for neoliberal economic policies in Latin America, which has resulted in severe inequality and state repression of the increasingly fed-up working class.

As the wave of protests against the state’s neoliberal policies and unsustainable social inequality grows, Chileans have expanded on the mass fare evasions to include other protests: barricading streets, staging sit-ins in schools and public areas, creating dissident music and art, and holding cacerolazos—a form of protest with deep historic roots where protestors collectively bang pots and pans in the streets or out of their windows to make their dissent more visible (and audible!).

(Cacerolazo can be heard throughout the port city of Valparaíso)

Meanwhile, as it did during Pinochet’s dictatorship, the Chilean media is showing false information in order to portray protesters as violent delinquents. Mainstream news outlets show videos of lootings and property destruction supposedly carried out by protestors, but many of these videos have been debunked, and police and military have been identified carrying out lootings and burning buildings.

(Police rob a market in one of the poorest neighborhoods in Santiago, while the media blames protesters for looting)

President Piñera echoed the words of the former dictator by declaring that Chile is “at war,” but protesters have pointed out that they are unarmed and are being violently repressed by military forces simply for expressing political dissidence. While the media tries to pit Chilean people against one another, Chileans refuse to be fooled by divisive rhetoric and fear-mongering. Protesters’ demands in their fight for justice continue to grow and develop, as they call for the president’s resignation and an end to state violence.

By the end of the weekend of October 19, workers and protesters began to call for a general strike. Port workers across the country announced that they would be striking starting October 21, a move which has historically paralyzed the country, given the economic importance of port activity to Chile. Likely already feeling the economic impacts of the strikes and afraid of escalation, Piñera announced several more minor concessions on October 22. But the violence did not end, and Chileans were not satisfied with Piñera’s measures. A general strike was called by the country’s major unions for October 23 and 24.

(“More money for the people who already have money”)

State violence against protesters continues to escalate, with police and military entering people’s homes to brutalize and arrest prominent dissidents. There are reports of rape and torture at the hands of the police and military, and protesters have begun to disappear—again calling to mind the years of Chile’s fascist dictatorship, during which over 3,000 people were killed or made to “disappear.” Despite these conditions, Chileans are more united than ever before in bringing the country to an economic standstill. The persistence, militancy, and direct tactics of the Chilean people carry the fight forward regardless of the state’s attempts to repress their movement.