Towards an Internationalist Feminism Rooted in the Working Class

After the massive January 21 Women’s March on Washington, all eyes are on March 8: International Women’s Day. We should join the women all over the world who will go on strike on March 8, fighting for an internationalist feminism rooted in the working class. 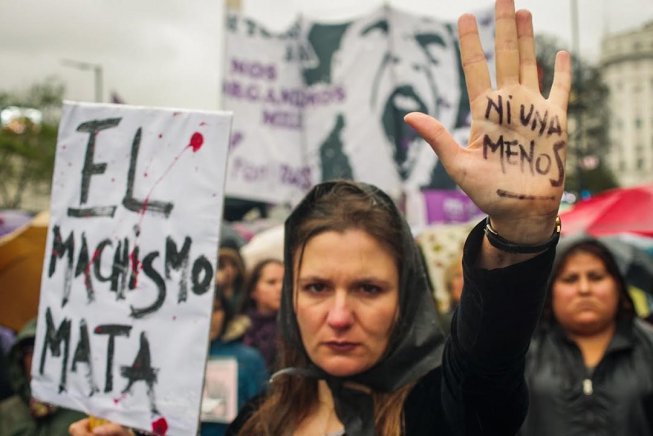 The political reality we face at this moment was difficult to imagine a year ago. The day after Trump took office under a nationalist-populist banner of “America First,” millions of women across America protested Trump and the sexism he represents. The Women’s March on Washington spawned more than 600 marches in cities around the country and 75 countries around the world. These are some of largest marches in the US since the Vietnam War era. Thousands of those who marched had never gone to a protest before, but on January 21, marched alongside their parents and grandparents, kids, and neighbors. People in red states marched in unexpected numbers.

The Women’s March was one of many mass mobilizations to protect women’s rights that have emerged globally over the past year. First the #NiUnaMenos movement brought thousands of protesters to the streets of Argentina two years in a row, and it has since spread to several Latin American countries. The movement speaks out against the epidemic of violence against women and femicides. In October in Poland, there was a women’s strike against a law that would further criminalize abortion, and a few weeks later, there was a strike in Iceland demanding pay parity between men and women.

These women’s movements come after years of ostensible successes for women within capitalist structures — there are more women CEOs; there are female heads of state, including Angela Merkel in Germany and Theresa May in Great Britain, two of the most important imperialist countries in the world. A brand of liberal feminism celebrates these gains as victories for women’s rights, upholding the idea that women holding positions of power in capitalist society is the key to our liberation.

Yet, liberal feminism has shown its strategic failure as women in powerful positions have not radically transformed society; most women now work a double shift — one at the workplace and one doing unpaid labor at home. It did not elimate sexist violence — three women a day are murdered by a current or former partner in the US, and every 20 minutes somone is a victim of intimate partner violence in the US. It did not eliminate the role of women as the most exploited and the most vulnerable group under capitalism — of the 1.5 million human beings who live in extreme poverty, 70% are women and girls. The violence of the capitalist system is disproportionately felt by Women of Color, trans and non binary people, the disabled, and all who experience multiple forms of oppression.

In the United States, Trump’s Presidency will mean an escalation of attacks: from threats to take away women’s right to abortions to the denial of rights of workers to organize in unions and denial of the basic rights of undocumented immigrants and Muslims. Abroad, Trump will continue Obama’s policies of drone wars, involving bombing women and children in the Middle East. Already, an 8-year-old girl was among the people killed in a raid in Yemen after Trump had only been in power for two weeks. He will also follow in Obama’s footsteps by contributing to the refugee crisis, not only by bombing countries, but by refusing to accept the human consequences of US imperialism — refugees.

To respond to these attacks, we need an internationalist feminist movement — one that does not see the problems faced by women in the US as separate from those confronting women in Mexico or Syria. That is why we echo the call issued in Beyond Lean-In: For a Feminism of the 99% and a Militant International Strike on March 8 to join with the 30 countries and organize a women’s strike on International Women’s Day, March 8.

To defeat Trump, we cannot act as individuals. We are most powerful when we stand together, not only in the streets, but also in our workplaces and places of study. We call on labor unions to call for a strike on March 8 and to organize workers to walk off the job. We call on the union leaders who spoke at the Women’s March on Washington — Randi Weingarten of the AFT and the George Gresham of the SEIU — to speak out out in favor of women’s strike and call local assemblies and councils to vote for and continue to organize it.

The Feminist Movement We Need

We hope that March 8 can be a springboard for a new kind of feminist movement in the US: a feminism powered by the working class. This kind of feminism can build on the Women’s March on Washington by organizing a strike instead of just a march. A strike interrupts the flow of capital, the most powerful weapon in a society based on profit. Our strike will be a refusal to do paid and unpaid labor — the work we do in the home and the work we do in the formal workplace. A strike is the epitome of a feminism powered by the working class, the only class that can end capitalism.

Working class feminists know that the capitalist parties are a dead end. Hillary Clinton, who represents corporate feminism, clearly demonstrates the bankruptcy inherent in the blueprint for women’s liberation that seeks rights by obtaining positions of power for the wealthiest women in capitalist structures. Clinton represents imperialism and racism, a reign of drones and death in the Middle East and a legacy of mass incarceration for the Black community in the US. While Bernie Sanders may seem like a real alternative to some, he operates within the same capitalist party as Clinton and voted with the Democrats 95% of the time while he identified himself as an “independent” in Congress. Today, he is the chair of outreach within the Democratic party, and he will use it to “expand Democrats’ grassroots efforts”.

We want a feminism that defends all women from attacks, so it must be rooted in the working class. Hillary Clinton’s neoliberal feminism and Sanders nationalism cannot and will not defend us. Only a feminism that fights uncompromisingly for all of our rights can win our liberation. In order to win rights for “the 99%”, our feminism must be powered by the strength of the working class– the only class that can combat the Republicans and Democrats who attack us and sell us out, and the capitalist system that profits off of our paid and unpaid labor. Only the working class has the strength to bring the system to its knees.

Thus our feminism must be independent of the Democratic party and combat the leadership of labor unions who have a history of backroom deals that give workers the short end of the stick. Thus, we must demand that the labor unions call for a strike on March 8 as without them a mass strike is almost impossible. We must put incessant pressure on our union leaderships because they are tied to the Democratic Party and the political establishment and will not easily support an action as disruptive as a strike.

The most central reason we call for a feminism powered by the strength of the working class is that we not only want to defeat Trump; we want to defeat the capitalist system that causes the misery in which we live. We want to defeat a system in which 1% of people control half of the world’s wealth; in which women in Mexican maquilas work 10 hour days and suffer all kinds of violence to produce products that can cross the US-Mexico border freely. We want to defeat the system in which Black and Brown people are locked up a disproportional rates, leaving women in prison to produce low cost items, or out of prison to work several low wage jobs to make ends meet. The working class produces the products, and the profits, that make this system function, and only the working class can put an end to it. We want to end our oppression as women living in a capitalist society, and so we must end the exploitative system that profits from our oppression.