A month before the Fridays for Future (FFF) “Global Climate Strike” called for September 20, trade unionists in Germany published the following statement calling on the leaders of ver.di, IG Metall, and all trade unions—including those outside the German Confederation of Trade Unions (DGB)—to issue an official strike call for that day. This statement was signed by over 500 workers. 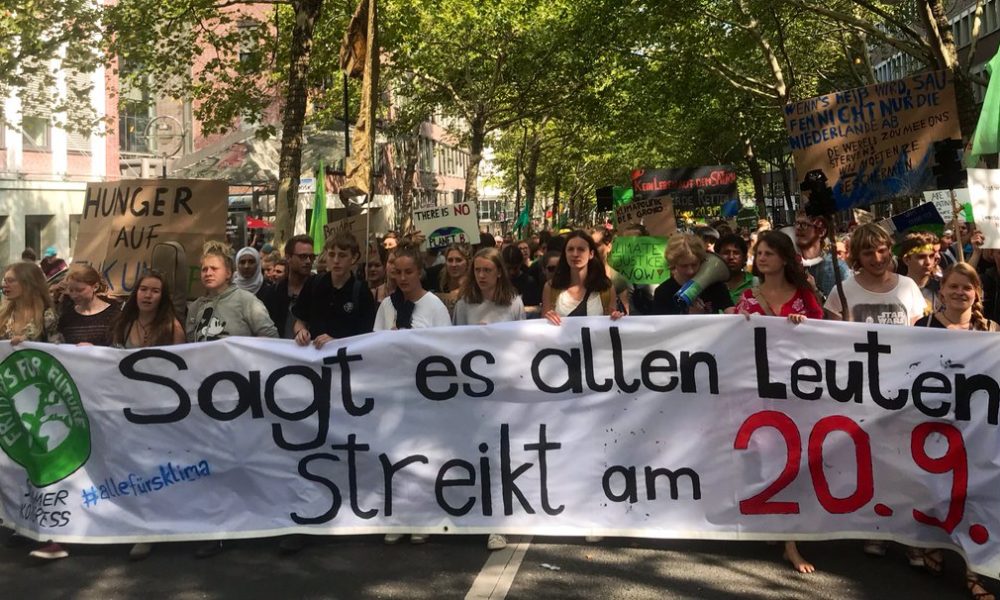 "Say it to everyone: Strike on September 20!"

Fridays for Future has called for a “Global Climate Strike.” This strike has often been characterized as a “general strike for the climate.” As trade unionists, we welcome the FFF call for unions and all workers to participate.

With this in mind, we welcome the announcement by Frank Bsirske, chairman of the ver.di service workers union, in the August 5 edition of Westdeutsche Allgemeine Zeitung: “We will call for participation in the day’s events. It’s about raising the banner—we need much more consequential action by policymakers on climate protection.”

This support for FFF is an important first step. But it’s not enough. Bsirske, like many of his colleagues from other union leaderships, also declared: “Of course we do not call for a regular strike. That will not do. Not everyone will be able to halt their work. But whoever can should clock out and join in.”

We think this statement is wrong:

Initiatives such as IG Metall’s #fairwandel (“fair transformation”) demonstration in late June, which brought 50,000 workers to the streets, show that environmental protection and social justice can be combined. But it is only in strikes that we show our full strength as workers.

That is why we, the signatories of this statement, are addressing the heads of ver.di, IG Metall, and all unions, including those outside the DGB: officially call a real strike! The future of all workers is affected by climate change!

At the same time, we also address all our colleagues in the factories and within the rank-and-file trade union structures: Let us work together to find solutions, as we are doing on September 20 by participating collectively in the climate protest. Works councils can call for meetings; shop stewards can convene meetings and open assemblies to discuss and organize joint participation; and all these meetings, as well as meetings of unions at the district, state, and federal level, can call on union leaders to issue the call for a real strike.

Let’s explore in common how to have the strongest trade union presence on September 20!

At the same time, we must be clear: even if September 20 is a huge strike, the climate catastrophe will be far from averted. Therefore, September 20 must serve as a prelude to bringing us all together to open a debate on a concrete strategy for the workers movement.

We call upon all unionists and workers who agree with this statement to sign it and republish it widely.

This statement was signed by over 500 workers from different unions and sectors across Germany. The full list of signatories can be read on the website of the rank-and-file trade union group ver.di aktiv.

First published in German on August 20 on the website of ver.di aktiv.